April Fool's Day is a 2008 horror film, which is a direct-to-DVD remake of the 1986 film of the same name. It is directed by The Butcher Brothers, also known as Mitchell Altieri and Phil Flores, who also directed the vampire film The Hamiltons.

April Fool's Day is described by star Scout Taylor-Compton as "Mean Girls crossed with horror", and was released straight to DVD release on March 25, 2008. The film received negative reviews from critics and fans.

A year after an April Fool's Day prank which resulted in the death of one of their set, a group of friends find themselves targeted by someone who is out for revenge.

As another in her long string of April Fool's pranks, Desiree suggests Blaine get Milan tipsy on champagne and pork her in his bedroom upstairs. Desiree and several of the others hover by the cracked-open bedroom door, prepared to videotape the affair with the camera Desiree lifted from Ryan. However, Milan has a seizure and falls off the balcony to her death. The group goes to court, and Blaine loses the control of the family's fortune which shifts to Desiree, but they are considered innocent and the death of Milan is considered a fatal prank.

One year later, Desiree, Blaine, Peter, Barbie, Torrance, and Ryan receive anonymous invitations to meet on Milan's grave at noon, April 1, 2008, with the cryptic P.S. "I have proof." Just after the entire sextet is back together, a messenger comes to the grave with a box containing a letter and a laptop computer. The letter says one of the six murdered Milan, and if that person does not confess, all of them will be dead by midnight. As a show of intent, the computer has footage of Charles drowning in his pool.

Everyone goes from the cemetery to the pool to confirm this mishap. Subsequently, an increasingly frantic Desiree sees one "suspect" after another "murdered" before her eyes (though the bodies keep disappearing). Barbie is electrocuted in a beauty pageant dressing room, Peter's campaign truck runs him down in a parking garage, Ryan's throat is slit in his humble apartment, and returning home, Desiree and Blaine discover even their long-time butler Wilford has been butchered in the kitchen.

After a brief separation from her brother, Desiree finds him tied to a chair. Worse yet, gun-wielding Torrance soon has Desiree tied inches away in another chair. After some back and forth, and Torrance fatally shooting Blaine in the chest, a chagrined Desiree finally admits it was she who spiked Milan's fatal drink, while allowing brother Blaine to become the "fall guy." At this point Blaine cannot contain a chuckle, and soon the whole crew of 2008 "victims" are surrounding a still-tied Desiree, telling her what a bitch she is, and how they have conspired to prove it to her. Special effects people from Torrance's Boogie Nights 2 set have equipped Blaine and the others with "squibs," and other cast members faked Desiree out by dressing as cops and "confirming" Ryan's murder as she and her brother were fleeing the scene.

To illustrate her end of the charade involving a revolver shooting blanks, Torrance pulls the trigger once more. Unfortunately for Desiree, this time the cartridge in the chamber is real, and the bullet blows off the top of her head. The next scene involves the same inquest-probate judge from a year earlier absolving Torrance of any guilt for Desiree's death, and confirming Blaine as sole heir of the family estate. The final scene shows Blaine driving off in what was Desiree's red Mercedes, a slowly building smirk on his face.

April Fool's Day was directed by The Butcher Brothers, and the two have also re-written the script for the remake with Mikey Wigart. Picked up by Stage 6 Films for distribution, it was filmed in North Carolina under producers Tara L. Craig and Frank Mancuso Jr. Mancuso had also produced the original. Scout Taylor-Compton noted that the filmmakers plan to make April Fool's Day an R-rated film.

Taylor-Compton confirmed her role in the film in July 2007, and at the time of writing, Jessica Stroup, Katheryn Winnick, Beau Garrett, Corey Sevier, Andrea Bogart and David Clayton Rogers were also rumored to star. However, Taylor-Compton is the only of those rumored who were cast for the movie.

The film would retain most of the original's humor; however, Flores said it is "pretty much contemporized, with off-beat humor, different settings -- something that would gel with today's audience." Altieri noted that "It's kind of more a twisting and turning story" with "some really good scares". 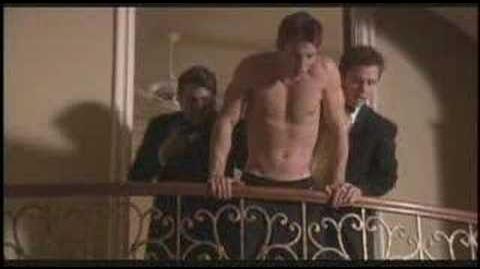 Retrieved from "https://horror.fandom.com/wiki/April_Fool%27s_Day_(2008)?oldid=125342"
Community content is available under CC-BY-SA unless otherwise noted.