This page needs improvement. It can be improved by: full plot, pictures, list of deaths, quote

This page is about the remake. For the original film, see Carnival of Souls (1962).

A young girl witnesses the brutal rape and murder of her mother by a circus clown and begins to have nightmares when the carnival comes back to town when she is an adult.

Although this film is a remake of 1962's Carnival of Souls, it bears little resemblance to the original aside from the ending. This film centers on Alex Grant who witnesses her mother's rape and murder by a carnival clown named Louis Seagram on January 24, 1977. Twenty years later, Alex fears for her life, worrying that Louis might come after her and her younger sister. One day Louis returns after being released from prison for murdering Alex's mother and tries to kill Alex. Alex drives the car that she and Louis are in into the river, then she begins to have hallucinations, she begins to lose her mind as Alex is now plagued by nightmarish visions of Louis Seagram and the same carnival where she met him. Alex is then drawn into a ghoulish and deadly game of cat and mouse with Seagram at the carnival.

Carnival of Souls was released on August 21, 1998. It is not known in how many screens, or how much money it made, but its theatrical run was so little, that it eventually came direct-to-video in the United States and other territories, resulting in a box office flop.

Carnival of Souls received negative reviews from critics, it holds a 20% on Rotten Tomatoes. 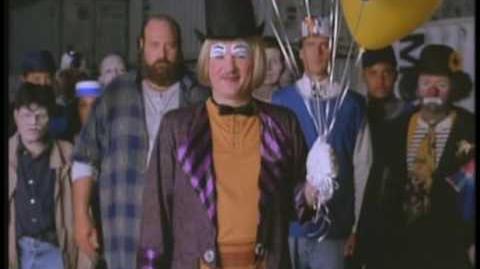 Retrieved from "https://horror.fandom.com/wiki/Carnival_of_Souls_(1998)?oldid=129475"
Community content is available under CC-BY-SA unless otherwise noted.