Children of the Corn

Children of the Corn: Genesis

Children of the Corn is a 2009 made-for-television supernatural horror film directed, written and produced by Donald P. Borchers and based on the 1977 short story of the same name by Stephen King.

Set primarily in 1975 in the fictional town of Gatlin, Nebraska, the film centers around traveling couple Burt and Vicky as they fight to survive a cult of murderous children, who worship an entity known as He Who Walks Behind The Rows, which had years earlier manipulated the children into killing every adult in town.

The film opens in 1963 in the town of Gatlin, Nebraska, which is in the middle of a severe drought. In a tent out in the vast cornfields a young boy, claiming that the Old Testament-era Canaanite God, whom he calls "Moloch He Who Walks Behind The Rows", had spoken to him in his dreams, telling the other children that the sinful and blasphemous adults are the reason for their recent troubles (Making a comparison to the corruption in Sodom and Gomorrah), prompting the children to kill everybody over twenty in town; leading them to found a death cult with a prime rule that, once reaching the age of twenty, one must be sacrificed to the cult's God.

Twelve years later a constantly bickering couple consisting of Vietnam veteran Burt and his wife Vicky are driving along a back road near Gatlin, planning on celebrating their second honeymoon in California, when a boy named Joseph stumbles out of the roadside corn and in front of their car. Accidentally running Joseph over, Burt assesses his body and realizes the boy's throat was slashed. After wrapping and placing Joseph's body in the trunk, Burt tells Vicky to wait for him while he looks around with shotgun in hand. Among the corn, Burt finds Joseph's bloodied suitcase and takes it with him back to the car. He and Vicky drive off in search of aid, not realizing they were being watched by Isaac and his most loyal follower, the warrior Malachai.

After hearing a group of children giving an evangelical sermon over the radio, Burt and Vicky reach an abandoned gas station before deciding to go to Gatlin after finding the phones non-functional. While Burt drives, Vicky manages to open Joseph's suitcase and finds a tribal-looking barbaric amulet inside, which she recognizes as a pagan creation. Meanwhile, in the cornfields Isaac tells the others about Burt and Vicky and that they, like the "blue man" (a police officer, who was crucified for trying to stop them) must be killed to appease "He Who Walks Behind The Rows", who demanded Joseph for trying to escape.

Reaching the town Burt and Vicky find it seemingly abandoned, with a calendar in a bar still reading 1963. Eventually coming across a church with a sermon board dated last week, Burt goes in to investigate, ignoring Vicky's pleas that they should just leave (and taking her keys after she threatens to abandon him). Inside the church, Burt finds various occult drawings, larger version of the trinket that was in Joseph's suitcase and a book listing the birthdays of the town's inhabitants. As Burt skims through the book, Vicky is surrounded and attacked by Malachai and several other boys (directed from a rooftop by Isaac) and manages to kill one of them with Burt's shotgun before Malachai stabs her. Hearing the shotgun blast, Burt rushes outside just as Malachai blows the car up. Chased by the children into an alleyway Burt, is taunted by Isaac (who throws a knife at him, only to miss his chest and hit him in the arm instead). Killing two of the older boys Burt runs off into the cornfields, where the children refrain from going without either Isaac or Malachai.

In the alleyway Isaac confronts Malachai, telling him that, by spilling Joseph's blood in the corn, he has angered He Who Walks Behind The Rows. After questioning Malachai's faith, Isaac has him pray before the two regroup with their followers, who they tell must sacrifice Burt in the clearing, where the blue man's corpse is held. After leading a sermon Malachai and the children begin hunting Burt through the corn. While searching Malachai is told by Nahum, one of the younger boys, that he had a vision of He Who Walks Behind The Rows, leading Malachai to believe Nahum is the new prophet and that Isaac's time is coming to an end. Before leaving to continue the search for Burt (who had overheard the entire conversation), Malachai mentions that they must finish the search before dark, as that is He Who Walks Behind The Row's time. Having lost a large amount of blood due to his arm injury Burt begins having flashbacks to Vietnam and kills several of the children, including Nahum. At nightfall the worshippers abandon the search and return to the church, having a feast while watching two of their older members having sexual relations to help the new generation prosper.

In the fields Burt, lost and delusional, has visions of all those he has killed, and begins wandering around aimlessly, searching for the road as the plant life begins attacking him. Soon, Burt finds the clearing and discovers Vicky who, like the blue man, has been made into a scarecrow. Hallucinating that Vicky's body is talking to him Burt is faced by He Who Walks Behind The Rows, who proceeds to disembowel him and rip his eyes out in a form of ritual sacrifice. The next day, Isaac tells the children that He Who Walks Behind The Rows told him in a dream that He is displeased with their inability to kill Burt, who He had to dispose of Himself—like the blue man (who, when killed, forced the 'age of favor' from twenty to nineteen). Before burying their dead, Isaac tells everyone that the age of sacrifice has been lowered from nineteen to eighteen as punishment for their sins.

In a post-credits scene, Malachai and the other eighteen year-olds enter the cornfields at dusk, offering themselves to He Who Walks Behind The Rows. While saying goodbye, Malachai's pregnant lover Ruth, whose faith had earlier been shaken, has a vision of herself setting fire to the corn.

Casting started two weeks before production began. Unlike in the original film, in which the bulk of the cultists were portrayed by actors over eighteen, Borchers decided to cast age appropriate actors. Borchers has stated that dealing with the largely underage cast proved to be the most difficult part of making the film.

Having worked on the original film as a producer Donald P. Borchers was originally content with it, though in hindsight came to believe it was too "Hollywoodized" and not true enough to the original short story. Wanting Stephen King to be involved in the production of the new film, Borchers sent a copy of the script to him, only to receive a letter from King's attorney stating that King wanted no part in the film. Borchers compares the cult of He Who Walks Behind The Rows to real-life cases of religious zealots who use violence as a means to an end, a mentioned example being the extremists in the Middle-East.

This remake was written, directed and produced by Donald Borchers, a producer on the original movie, which was filmed in the Sioux City Iowa, area. Borchers said he chose the Quad-Cities Iowa/Illinois area after receiving a recommendation from the Iowa Film Office in the state Department of Economic Development.

Shooting took place in and around the Quad Cities during September 2008. 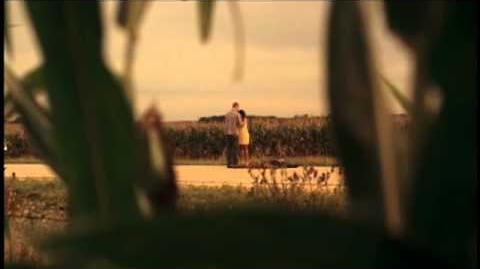 Retrieved from "https://horror.fandom.com/wiki/Children_of_the_Corn_(2009)?oldid=129626"
Community content is available under CC-BY-SA unless otherwise noted.