The Amityville Horror is a 2005 American horror film directed by Andrew Douglas. The screenplay by Scott Kosar and Sandor Stern is based on the 1977 novel of the same name by Jay Anson, which was inspired by a real-life November 1974 incident in which Ronald DeFeo, Jr. shot dead six members of his family in their Long Island home.

The film is a remake of a 1979 screen adaptation that spawned several sequels that had little to do with the original story.

Warning: this text contains details about the plot/ending of the film.
George and Kathy Lutz and her three children from a previous marriage move into what they believe will be their dream home, 112 Ocean Avenue situated on the waterfront in Amityville, New York. When George questions the asking price, which is well below market value, the realtor confesses the house was the scene of a brutal murder committed by Ronald DeFeo, the son of the former owners, who killed his family in their sleep with a rifle a year earlier. Despite some misgivings, George acquiesces to his wife's wishes and purchases the property.

Almost immediately, the family is plagued by a series of unexplained and apparently supernatural happenings. Refrigerator magnets rearrange themselves to spell out the message KATCH EM, KILL EM. Daughter Chelsea insists she has become friendly with a young girl named Jodie, the same name of one of the slaughtered DeFeo children. Chelsea also inexplicably possesses Jodie's teddy bear, with whom Jodie was buried. George frequently complains of the cold and starts spending large amounts of time in the basement, where he hears garbled voices coming from the furnace, an old television, and an unplugged clock radio reading 3:15, the time the DeFeos supposedly were killed. The locked boathouse door repeatedly is found open, blood seeps from the walls, and the family dog incessantly barks at things only he can see. Babysitter Lisa is trapped in a bedroom closet that has a door with no lock yet will not open, and hysterically insists she saw Jodie inside when she is finally released.

At Kathy's behest, local priest Father Callaway comes to bless the house, but is driven away when his holy water sizzles as it hits the walls and he is attacked by a swarm of flies. He later tells Kathy the battered stuffed animal Chelsea has belonged to Jodie DeFeo and was buried with her.

George's behavior becomes increasingly bizarre, and he begins to mistreat and taunt the stepchildren he once clearly adored. As the paranormal events escalate, Kathy decides to research the history of her home in the library's public records. There she discovers it once belonged to a mysterious cult preacher named Father Katchem (thus explaining the KATCHEM AND KILL EM message), who tortured and killed Native Americans in the basement. Kathy is convinced the man's evil spirit has taken control of her husband, and she races home to remove her children from the house and take them to safety. Meanwhile, George has broken through the basement wall and discovered a secret chamber, where he has visions of Father Katchem and his numerous victims. Apparently possessed and no longer able to control his impulses, George chases his family with a shotgun. In a desperate struggle, Kathy manages to knock him out and with the help of the children binds his hands and feet and carries him to the boathouse, from which they make their escape by water. George regains consciousness and urges Kathy to get them as far away from the house as possible.

Jodie is seen standing in the front doorway. As she starts screaming and cries a single tear, the clocks throughout the house reset themselves to 3:15, misplaced objects go back to were they were and the girl is pulled through the hallway floor by an unknown force.

Although the film is set on Long Island, it was shot in Chicago, Antioch, Buffalo Grove, and Fox Lake in Illinois and Salem and Silver Lake in Wisconsin.

MGM claimed the remake was based on new information uncovered during research of the original events, but George Lutz later claimed nobody ever spoke to him or his family about the project. When he initially heard it was underway, his attorney contacted the studio to find out what they had in the planning stages and to express Lutz's belief they didn't have the right to proceed without his input. Three letters were sent and none were acknowledged. In June 2004, the studio filed a motion for declaratory relief in federal court, insisting they had the right to do a remake, and Lutz countersued, citing violations of the original contract that had continued through the years following the release of the first film.[1] The case remained unresolved when Lutz died in May 2006.

This film was rated R by the MPAA. Rated R for violence, disturbing images, language, brief sexuality and drug use.

Manohla Dargis of the New York Times said, "Low-key creepy rather than outright scary, the new Amityville marks a modest improvement over the original, partly because, from acting to bloody effects, it is better executed; and partly because the filmmakers have downgraded the role of the priest, played in all his vein-popping glory by Rod Steiger in the first film and by a considerably more subdued Philip Baker Hall here."[2]

Peter Travers of Rolling Stone rated the film one star and commented, "First-time director Andrew Douglas crams in every ghost cliche, from demonic faces to dripping blood. This house springs so many FX shocks it plays like a theme-park ride. Result? It's not scary, just busy. For the real thing, watch Psycho . . . The Shining . . . The Haunting . . . or The Innocents . . . What all those films have in common is precisely what the new Amityville Horror lacks: They know it's what you don't see in a haunted house that fries your nerves to a frazzle."[3]

Ruthe Stein of the San Francisco Chronicle thought "the truly shocking thing about the new version is that it's not bloody awful . . . The decision to use minimal computer-generated effects, made for monetary rather than artistic reasons, works to Amityville's advantage. It retains the cheesy look of the 1979 original, pure schlock not gussied up to appear to be anything else."[4]

Marjorie Baumgarten of the Austin Chronicle stated the original film was "an effective little tingler whose frights are steady, implied, and cumulative . . . but in the remake the frights are such that you’re wondering why the stubborn Lutzes don’t flee after the first night. Obviously, the filmmakers were keen to remake this film exactly because the technological advances of the last 25 years now permit more graphic displays of horrific imaginings and computer enhancements that can render the invisible world visible. Strategically, the new Amityville never intended to go for the subtler, implied horror of the original; this one would be all about scaring the pants off viewers. And in this, the movie generally succeeds as sudden scares and flashes of yucky imagery cause audience members to yelp aloud as if on cue . . . The most irritating aspect of the new movie, however, has nothing to do with comparisons but rather with some of the inherent illogic of the story. Why are we seeing images of a hanged girl when we know she’s been shot in the head? Images seem to be grafted into the film that have little to do with the actual story. Maybe it’s a technique that succeeds within quick advertising spots, but it piles confusion onto the art of storytelling."[5]

James Christopher of The Times observed, "There is something pleasurably batty about the way the family blunders on. The chills are satisfyingly creepy. The gory special effects are lavish and effective. And the wooden house itself is a sinister architectural pleasure. It’s total nonsense of course, but I left the lights on that night anyway."[6]

The film was released on DVD in anamorphic widescreen format on October 4, 2005. Bonus features include commentary by Ryan Reynolds and producers Andrew Form and Bradley Fuller; eight deleted scenes; Supernatural Homicide, with discussions about the murders that are the basis for the film with police and local residents; The Source Of Evil, a behind-the-scenes look at the making of the film; and a photo gallery. 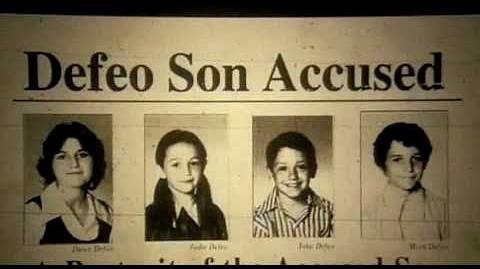 Retrieved from "https://horror.fandom.com/wiki/The_Amityville_Horror_(2005)?oldid=128584"
Community content is available under CC-BY-SA unless otherwise noted.