This page needs improvement. It can be improved by: pictures, list of deaths, information, quote on top, (more) trivia

30 Days of Night is a 2007 American horror film based on the comic book miniseries of the same name. The film is directed by David Slade and stars Josh Hartnett, Melissa George, and Danny Huston.

After an Alaskan town is plunged into darkness for a month, it is attacked by a bloodthirsty gang of vampires.

The town of Barrow, Alaska is preparing for its annual "30 Days of Night", a period during the winter in which the sun will not be seen for a month: some inhabitants leave for Fairbanks or other parts south. As the town gets ready, the Stranger (Ben Foster) rows ashore from a large ship. Once in Barrow, he sets about sabotaging the town (stealing and burning cell phones, killing all the sled dogs) in the belief that the vampires will make him one of them if he helps them with their plans.

Barrow's sheriff, Eben Oleson investigates these crimes. As he does so, he learns that his estranged wife, Stella Oleson, missed the last plane out of town and will have to spend the 30 day period in Barrow. Although they try to avoid one another, when Eben confronts the Stranger in the town diner, Stella helps subdue him and take him to the station house.

From the jail cell, the Stranger taunts Eben, Stella, Eben's teenage brother, Jake and grandmother, telling them that death is coming for them. Just then, vampires attack the local telecommunications centre and power supply, rendering the town dark and cut off from the outside world. Eben goes to the telecommunications centre and finds the operator's head on a spike. He and Stella then go through town, warning all the residents to lock themselves indoors and load all weapons.

Meanwhile, the vampires, led by Marlowe attack the town. The vampires speak in an ancient, guttural language, clarified by subtitles. Unless they are shot in the head, bullets are useless against them. They slaughter most of the town, including Eben's grandmother, while the remaining survivors congregate in the diner. The vampires attack Eben and Stella but Beau Brower, the local snowplow driver, rescues them. Everyone decides to go to the boarded up house of someone who had left town earlier that day. The house has a hidden attic where they are able to hide. Marlow finds the Stranger in the jail and assures him that they will take care of him. Then, rather than turning him into a vampire as the Stranger wished, Marlow kills him. Marlow orders the vampires not to transform anyone into a vampire; they will slaughter the town and then disappear in order to preserve modern humanity's belief that vampires are "only bad dreams" and nothing more.

Over the next week, Eben, Stella, Jake and seven others stick it out in the attic. During this time, a stray survivor walks by crying for help, being used as bait by the vampires. Eben ventures out to help her, finding John Riis in the crawlspace under a building. As the girl, having been unsuccessful in luring any survivors to her, is attacked and killed by the vampires, Eben attempts to help John. However, he discovers that John had become a vampire, and ends up killing him. It is because of this that he learns that beheading the vampires will kill them. Shortly after, Wilson and his senile father, Isaac, are lost when they leave the house in which they had been hiding.

When a blizzard hits, Eben and the others use the whiteout conditions to make it to the general store. There, a young girl vampire named Macey attacks and wounds one of them. She is then grabbed and screams in horror until she is decapitated by Jake with an axe causing her severed head to fall off and her headless body to fall away. The whiteout conditions end, preventing them from making it back to the abandoned house under cover. Eben decides everyone should go to the police station. He provides a diversion by running to his grandmother's house to retrieve an ultraviolet lighting system. Eben makes it to the house, jump starts the generator, and turns the light on the vampires who have followed him. It hideously burns a female vampire named Iris, forcing Marlow to kill her. Eben escapes the house followed by the vampires. Beau comes to the rescue, killing many of the vampires with his backhoe. He crashes into a hotel and then ignites a box of dynamite using road flares, trying to kill himself. His ploy is unsuccessful though as Beau lives through the blast and Marlow crushes his skull, but it gives Eben the time to make it to the police station. There, the wounded member, Carter Davies turns into a vampire. He tells the group of the death of his wife and children. He longs to be with them and is horrified of the prospect of living forever, never to see them in the afterlife. With some shred of his humanity left, he asks Eben to end it. Eben complies, and beheads him.

Two more weeks pass. Stella and Eben find his deputy, Billy Kitka, signaling them with a flashlight from across the street. Eben and Stella make it to Billy's house. When the vampires had attacked, Billy killed his wife and daughters but his gun jammed when he tried to commit suicide. Stella and Eben take him back to the station house. There they learn that the others have made it to the utilidor, a power station that controls the oil pipeline which is only structure that still has power. Eben, Stella, and Billy begin to sneak towards the utilidor. Soon the members spot a figure moving towards them. They soon realize it's a young human girl. Stella stops to rescue the young girl, Gail Robbins, who is being stalked by the vampire Zurial. Eben and Billy try to distract him while Stella gets the girl to safety. Instead, Billy and Eben are separated. They both eventually make it to the utilidor, but another vampire follows Billy inside.

Eben is happy to see the rest of the survivors have made it alive. The vampire attacks Billy, ripping into his neck and dazing him. When the vampire turns to attack Eben, Billy gets up and knocks it into the gears of the utilidor's pump, shredding the creature. Billy's arm gets caught in the gears as well and his entire forearm is completely gone. Billy screams in pain as Eben tries to calm him down. Eben then realizes that Billy's screams become vampiric shrieks. Eben is then forced to kill Billy with an axe, beheading him.

The sun is due to rise in a few hours. The vampires decide to burn the town to cover their tracks to preserve the thought that they don't exist. Stella radios to Eben that she and the young girl are hiding under an abandoned truck across the street from the utilidor, the flames rapidly approaching them. Realizing he cannot beat the vampires as a human, Eben injects himself with Billy's infected blood so he can fight them as a vampire. He and Marlow fight a vicious battle. As the battle comes to a close, Marlow charges Eben as Eben throws a punch. The punch, empowered by Eben's vampiric super-strength, runs through Marlow's mouth and out the back of his head, killing him. Leaderless, with the sun about to rise, the other vampires disappear.

Eben and Stella watch the sunrise together. While Stella rests on Eben's shoulder, they share one last kiss. Stella holds Eben tightly in her arms as the light of sun brightens. His body begins to burn and he lets out a bloodcurdling scream. Seconds later he dies, his body turned to ash. The end of the film is marked as Stella closes her eyes, cradling Eben's ashen corpse. 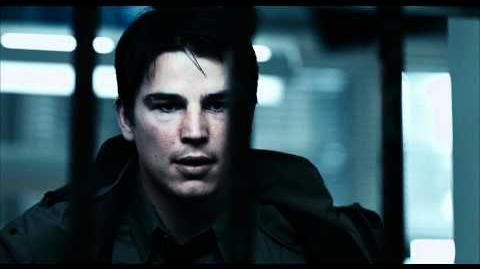 Retrieved from "https://horror.fandom.com/wiki/30_Days_of_Night_(2007)?oldid=138976"
Community content is available under CC-BY-SA unless otherwise noted.