This page needs improvement. It can be improved by: information, quote on top, trivia

The film is about survivors of undead serial killer Freddy Krueger while they learn to take control of their own dreams in order to fight back.

Taking place six years after the events of the first film, with no mention of Jesse Walsh (the protagonist in A Nightmare on Elm Street 2: Freddy's Revenge), Kristen Parker falls asleep and dreams of a young girl running into an old, condemned house, which bears resemblance to Nancy and Jesse's house in the previous films. As Kristen follows after the little girl, she begins to realize that she's in trouble. She finds the girl in a boiler room. As she hears someone walking above them, the little girl exclaims, "Freddy's home". Kristen wakes up in a panic.

Kristen is placed in Westin Hills, a psychiatric hospital after an "attempted suicide." When a nurse tries to sedate her, Kristen fights back and cuts one of the orderlies, Max, with a scalpel. As she backs into a corner chanting a rhyme she heard in her dreams, new staff member Nancy Thompson suddenly appears in the room and finishes it for her. Nancy soon realizes that Freddy is not dead, and that Kristen and the other patients, Joey, Taryn, Kincaid, Phillip, Jennifer and Will, are the "last of the Elm Street children" - the last remaining children of the vigilantes who killed Freddy.

After seeing Freddy in a dream, Nancy realizes she has to protect the remaining children. Unfortunately, Freddy kills Philip by tearing the tendons from his arms and legs enabling Freddy to control him like a puppet, making him walk up to the top story, then cutting them to let him to fall to his death. He also kills Jennifer by making the television grow arms, grab her, and smash her head into it, before Nancy can do anything.

Meanwhile, Neil, the psychiatrist who works with the kids, begins to receive visits from a mysterious nun, Sister Mary Helena. She informs Neil that Krueger was never properly buried and must be laid to rest in consecrated ground. Soon after, Joey is kidnapped by Freddy in his dream, and in the real world he lies in a coma. Nancy and Neil are fired because they try to tell their superiors that the dreams are real; the remaining kids are forced onto a regime of nightly sedation. As Neil and Nancy's father, Lt. Donald Thompson, embark on a journey to find Freddy's corpse and give him a proper burial, Nancy and the kids attempt a group sleep session to try and go in and free Joey and get to Kristen, who was thrown in the "quiet room" and sedated against her will.

As soon as the kids fall asleep, Freddy separates them and kills Taryn by injecting her with a massive amount of heroin from his claws and Will by making his wheelchair grow spikes and attack him, then stabbing him before the others can save them. However, Kincaid manages to fight his way through Freddy's barriers and reunite with Nancy and Kristen. Kristen had initially found Nancy after she was separated from her and put back into the film's opening dream sequence, only this time featuring Freddy decapitating her mother, holding the head up to Kristen, and preceding to speak to her about ruining it for mom every time she brings a man home.

Nancy, Kristen, and Kincaid find Joey dangling above a huge fiery pit. Nancy manages to save him while Kristen wrestles with Freddy. Nancy realizes that Freddy is stronger than he once was, to which he replies "the souls of the children give me strength." It becomes clear that Freddy does not simply kill his victims; he holds their souls gruesomely captive. Kincaid tries to take Freddy, but is overpowered. Before Freddy can kill Kincaid, he realizes that his bones are being disturbed - Neil and Nancy's father are about to bury Freddy in a true grave, near an old junkyard. Freddy takes possession of his bones and fights off Neil; he throws Lt. Thompson onto the tail fin of an old car, killing him.

Freddy returns to the children but is again foiled, this time by Joey. Nancy and the kids rejoice at their apparent victory. Nancy's father visits her in the dream world as a spirit, explaining that he has "crossed over". He apologizes to her and hugs her. As Nancy and her father embrace, Nancy is stabbed by Freddy's glove. It wasn't her father after all; it was Freddy. Kristen tries to save Nancy, but it's too late and Freddy grabs Kristen as well. Just as he is about to finish her, Nancy takes Freddy's hand and stabs him with his own glove. At the same moment, Neil awakens and pushes Freddy's bones into the grave. He brandishes a bottle of holy water and begins to fling it upon the bones. In the dream world, the holy water is burning Freddy and bright light pours out from within his body. Neil takes a crucifix from his pocket and places it on the skull. A cross shape is burned into Freddy's head, killing him.

Nancy, however, is beyond any help and dies. At the funeral, as others are weeping in silence over the loss, Neil sees the nun that helped him. When he goes to thank her she vanishes. He is left standing by a gravestone. On the stone there is a name Amanda Krueger, just below that is another name, her name in Christ: Sister Mary Helena, showing that the nun was the spirit of Freddy's mother. At the end, Neil falls asleep with a toy house next to his head, and the lights suddendly come on in it, just before the credits roll.

List of deaths in the film, A Nightmare on Elm Street 3: Dream Warrior. 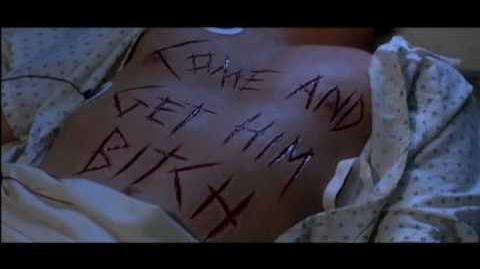 Retrieved from "https://horror.fandom.com/wiki/A_Nightmare_on_Elm_Street_3:_Dream_Warriors_(1987)?oldid=142607"
Community content is available under CC-BY-SA unless otherwise noted.