A Nightmare on Elm Street 5: The Dream Child

The film's general tone is much more gothic and dark than the films before, and used a blue filter lighting technique in most of the scenes.

The film's main titles do not display the "5" that was used in all of the promotional material, TV spots, trailers, and merchandise. The main titles simply say "A Nightmare on Elm Street: The Dream Child". Domestically, the film grossed $22.2 million, and received generally mixed reviews from critics.

Warning: this text contains details about the plot/ending of the film.
Taking place a year after The Dream Master, Alice and Dan have now started dating and there is no sign of Freddy Krueger (Robert Englund). Alice begins to have dreams of a young nun, with a name tag for "Amanda Krueger", being locked away in an asylum full of maniacs. Upon graduating from high school, Alice and Dan plan their getaway to Europe. Alice has made some new friends: Greta, a supermodel in training, Yvonne, a future Olympic diver, and Mark, a comic geek.

As Alice makes her way to work from graduation, she finds herself back at the asylum. Alice is strolled into an operating room wearing Amanda's uniform and screaming in pain. As Alice looks around, she sees Amanda Krueger on the table, instead of herself, giving birth. As the baby is delivered, Amanda clamors to get to it. The baby breaks free from the doctors and escapes the room. Alice follows it into a church rectory, the same place that Alice defeated Freddy in. Before she can stop him, the baby finds Freddy's clothes and quickly grows into an adult. Amanda shows up to help Alice, but she's disrupted when Freddy slams the church doors closed on her. After these events, Alice finds herself at work, but four hours late.

Alice immediately phones Dan who leaves their friends and rushes over to the diner. Before Dan can make it he falls asleep and Freddy forces him to drive into another vehicle. Alice, after watching Freddy take possession of Dan, faints in the middle of the street. At the hospital, she is informed that she is pregnant with Dan's child. While recouping, she meets a young boy, Jacob. Yvonne later informs Alice that there were no children on her floor, nor is there a children's ward at the hospital. Krueger begins to kill Alice's friends one by one as they fall asleep. First Greta, then later he kills Mark. Alice requests an early ultrasound for her baby, and she soon realizes that Freddy is using her child to get into her friend's dreams. Alice also discovers that Jacob is really her son. It's only when Yvonne barely escapes Krueger, thanks to a little help from Amanda's soul, that she accepts what Alice has been telling her.

Alice sends Yvonne to the abandoned asylum to release Amanda's soul while she sets out to free Jacob. Krueger pulls her into a M. C. Escher-like labyrinth to try and slow her down. Freddy goes back into hiding inside Alice, as she finally catches up to Jacob. Upon the revelation that Krueger has been hiding inside of her the whole time, Alice forces him out, but almost dies in the process. After being released by Yvonne, Amanda arrives and instructs Jacob on how to defeat Freddy. Jacob, releasing the power that Krueger has given him, forces Freddy to revert to an infant. Before he can escape, though, Amanda picks him up and absorbs him back inside. Freddy begins to fight from within and the church doors close. A year goes by; Alice gives birth to Jacob and is finally at peace from the nightmares.

List of deaths in the film, A Nightmare on Elm Street 5: The Dream Child. 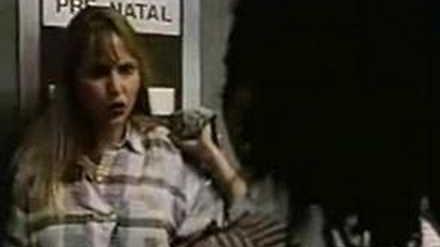 A Nightmare on Elm Street 5 The Dream Child Full Trailer

Retrieved from "https://horror.fandom.com/wiki/A_Nightmare_on_Elm_Street_5:_The_Dream_Child_(1989)?oldid=132479"
Community content is available under CC-BY-SA unless otherwise noted.