This page needs improvement. It can be improved by: quote on top

In this film, they encounter Count Dracula, Frankenstein's monster and The Wolf Man, while subsequent films pair the duo with the Mummy, Dr. Jekyll and Mr. Hyde, and The Invisible Man. On a TV special in the early 1950s, the two did a sketch where they interacted with the latest original Universal Studios monster being promoted at the time, the Creature from the Black Lagoon (1954). The film is considered the swan song for the "Big Three" Universal horror monsters – Count Dracula, the Wolf Man and Frankenstein's monster – although it does not appear to fit within the loose continuity of the earlier films.

In 2001, the United States Library of Congress deemed this film "culturally, historically, or aesthetically significant" and selected it for preservation in the National Film Registry, and in September 2007, Readers Digest selected the movie as one of the top 100 funniest films of all time. The 1948 film is recognized by historians as the definitive end point to the American golden age of the monster mash and the classic Universal monster cycle.[1]

The film opens with Lawrence Talbot making an urgent call from London to a Florida railway station where Chick Young and Wilbur Grey work as baggage-clerks. Talbot tries to impart to Wilbur the danger of a shipment to the "McDougal House Of Horrors" (a local wax museum) which purportedly contain the actual bodies of Count Dracula and the Frankenstein Monster. However, before he is able, a full moon rises and Talbot becomes The Wolf Man and the call disconnects. Wilbur, thinking the call is just a crank, continues on with his work day. Immediately thereafter, the actual Mr. McDougal shows up to claim the shipments and, fearing them damaged whenever Wilbur and Chick mishandle them, demands that the crates be delivered in person so his insurance agent can inspect them.

When Chick and Wilbur get to McDougal's "House Of Horrors", they open the first crate and find a coffin with "Dracula" inscribed on the front. When Chick leaves to retrieve the second crate, Wilbur witnesses Dracula awaken and tries to get Chick's attention. But when Chick returns with the second crate, Dracula hides just in time to go unnoticed. After Chick leaves again to greet McDougal and the insurance agent, Dracula hypnotizes Wilbur and re-animates Frankenstein's Monster. McDougal and

the insurance agent (with Chick in tow) arrive again too late to witness anything. Finding the storage crates empty, McDougal accuses the boys of theft and has them arrested.

That night, Dr. Sandra Mornay receives Dracula and the Monster at her island castle. Sandra, a gifted surgeon who has studied Dr. Frankenstein's notebooks, has been posing as Wilbur's girlfriend as part of Dracula's scheme to replace the Monster's brutish brain with a more pliable one — Wilbur's.

Wilbur and Chick are bailed out of jail and mistakenly believe Sandra to be their benefactor. It is actually Joan Raymond, who is secretly working for the insurance company that is processing McDougal's claim, and hopes Wilbur will lead her to the missing "exhibits". Meanwhile, Larry Talbot has taken the apartment across the hall from Wilbur and Chick. He has tracked Dracula and the Monster from Europe and knows them to be alive. Talbot asks Chick and Wilbur to help him find and destroy Dracula and the Monster.

The next day, Joan Raymond comes to Chick and Wilbur's apartment and feigns love for Wilbur. Wilbur, not expecting the favor but embracing it, invites Joan to the masquerade ball that evening. That night, Wilbur, Chick and Joan go to Sandra's castle to pick her up for the ball. While the ladies powder their noses, Wilbur answers a telephone call from someone wanting to speak to a 'Dr Leighos'. It is Talbot, who informs them that they are in fact in the "House of Dracula". Wilbur reluctantly agrees to search the castle with Chick, and soon stumbles upon an underground passageway, complete with boat and dock. Chick insists they search for Dracula and the Monster in an attempt to prove to Wilbur that they do not really exist. Wilbur experiences a few close calls when he is confronted by the monsters and every time he tries to show them to Chick they have disappeared. Meanwhile, Joan has discovered Dr. Frankenstein's notebook in Sandra's bureau and Sandra has discovered Joan's insurance company employee I.D. in her purse.

After the women re-join the men, a suavely dressed Dr. Leighos, (a.k.a. Dracula) descends the castle stairs and introduces himself to Joan and the boys. Also working at the castle is the naive Prof. Stevens, who questions some of the specialized equipment that has arrived. After Wilbur admits that he was in the basement, Sandra feigns a headache and tells Wilbur and the others that they will have to go to the ball without her. In private, Sandra admits that Stevens' questions, Joan's credentials, and Wilbur's curiosity in the basement have made her nervous enough to put the experiment on hold. Impatient, Dracula asserts his will by hypnotizing her, biting her in the throat, and making her his vampire slave.

At the ball, the boys encounter Talbot and McDougal just as Dracula and Sandra rejoin the group. Dracula, when confronted by Talbot, easily deflects accusations that he is "the real thing" by insisting that it's only his costume and he is not actually Dracula. While Dracula takes Joan for a dance, Sandra lures Wilbur to a quiet spot in the woods. Before she can move in and bite him, Chick and Larry approach and she flees. As they search for Joan, Talbot transforms into the Wolf Man and stalks Wilbur. Wilbur escapes, but the Wolf Man finds and injures McDougal. Noting that Chick has brought a wolf mask as his costume to the ball, McDougal concludes that it was Chick who actually attacked him out of revenge. Chick manages to slip away, only to witness Dracula hypnotizing Wilbur. Chick is then also hypnotized and rendered helpless while Dracula and Sandra bring Wilbur and Joan back to the castle. The next morning, Chick and Talbot meet and Talbot tells Chick that he is the Wolf Man. After Chick explains to him that Dracula has taken Wilbur and Joan to the island they agree to work together to rescue them.

While Wilbur is being held in a pillory, Sandra finally explains to him the plan to transplant his brain into the Monster. She and Dracula leave him to prepare the Monster for the operation. Chick and Talbot arrive to rescue Wilbur, but in an attempt to escape Dracula hypnotizes Wilbur into coming back. Wilbur who is now strapped to a slab witnesses Dracula giving the Monster electrical boosts in the lab.

Just as Sandra prepares to open Wilbur's skull, Talbot and Chick storm in. Talbot struggles with Sandra and casts her aside. Chick knocks out Sandra and runs out of the lab to make Dracula leave so Talbot can save Wilbur. Just as Talbot is about to untie Wilbur, he once again transforms into the Wolf Man. Dracula returns to the lab to find the Wolf Man there and flees, with the Wolf Man giving chase. Chick arrives to untie Wilbur just as the Monster, now at full power, breaks his own restraints and rises from his stretcher. Sandra attempts to order him back, but the Monster defiantly throws her out the lab window to her death. Chick and Wilbur try to escape with the Monster hot on their trail.

After trying to fight off the Wolf Man with little success, Dracula attempts to escape and transforms into a bat, but the Wolf Man snares him, then grabs him and the two monsters fall down to the rocky seas below to their deaths. Joan abruptly wakes from her trance, while the boys escape the castle and head to the pier with the Monster in pursuit. Wilbur succeeds in untying the boat, while Stevens and Joan arrive and set the pier ablaze. The Monster turns around and marches into the flames, succumbing as the pier collapses into the water.

Just as Chick and Wilbur relax, Wilbur scolds Chick for not believing him. Chick insists that, since all the monsters are dead "there's nobody to scare us anymore", they hear a disembodied voice (provided by an uncredited Vincent Price) and see a cigarette floating in the air. The voice says: "Allow me to introduce myself, I'm the Invisible Man!" The boys jump off the boat and swim away while the Invisible Man lights his cigarette and laughs as the final scene comes to a close.

List of deaths in the film, Abbott and Costello Meet Frankenstein. 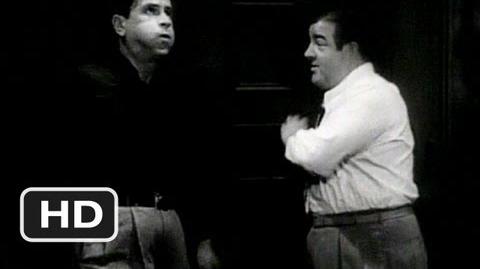 Retrieved from "https://horror.fandom.com/wiki/Abbott_and_Costello_Meet_Frankenstein_(1948)?oldid=123379"
Community content is available under CC-BY-SA unless otherwise noted.