This page needs improvement. It can be improved by: pictures, list of deaths

The Abominable Dr. Phibes is a British film directed by Robert Fuest and released in 1971. It stars Vincent Price as the revenge-driven mad scientist Anton Phibes who creates elaborate schemes to torment his victims based upon the 10 plagues of ancient Egypt.

The movie opens with an elaborate looking ballroom accented by an artificial bandstand called the Clockwork Wizards. At the face of the room, sits a caped pianist with a dark hood and concealed face, thumping away at an elaborate pipe organ. A woman with strange clothing walks in and the two begin waltzing as the clockwork band plays on. But everything is not all fun and games. After a tango or two, our hooded villain, Doctor Anton Phibes and his lovely assistant, Vulnavia, leave the stately lair and embark upon a journey in a Rolls Royce.

Phibes creeps along a roof to the home of Doctor Dunwoody in the middle of the night. While the good doctor is sleeping, Phibes lowers a birdcage containing a flock of vampire bats into the room. He releases the bats, which then begin to rake and claw at Dunwoody's face until he is dead. Dunwoody's butler finds his body and calls the police. Enter: Inspector Trout. Trout and his sidekick, Sgt. Schenley, have no idea how to pursue such a bizarre murder.

The following evening, Phibes attends a masked costume party. One of the guests is another physician known as Doctor Hargreaves. Without revealing his own face, Phibes gives Hargreaves a large plaster frog's head that he is required to wear for the duration of the evening. But the frog head has a bizarre winch attached to the back of it that slowly tightens until it crushes Hargreaves' skull in. The other guests fail to either notice or, even as the man is suffering. Soon after this, we get a look at the face of Doctor Phibes. His face is hideously burned as if he had been in a fire.

Phibes’ third murder is even stranger than the first two. Vulnavia and he go to the home of yet another doctor named Longstreet. The doctor is shown opening a container containing a film from Dr. Phibes. After his housekeeper leaves Doctor Longstreet sits in his den watching the film. the film features a snake charmer. The two dastardly villains sneak into the room and Vulnavia ties Longstreet down to his chair. He must be at least slightly smitten by her, because he offers no resistance, despite the fact that he has no clue who this woman is. That's the inherent beauty of the Phibes/Vulnavia partnership. She lulls the victims into a false sense of security while Phibes watches from behind some hidden curtain. He then comes out and finds some maniacal way to dispose of his victim.

Phibes hooks Longstreet up to a catheter and begins draining his blood into eight pint-sized glass jars while Vulnavia watches the affair while playing the violin. He then delicately arranges the eight jars on the mantelpiece and the two leave. Longstreet's housekeeper finds his body, but Phibes got a little careless with this one and left a clue behind. Eventually the housekeeper informs Inspector Trout, who arrives to examine the body. He finds that the killer had left behind a strange medallion with Hebrew symbols etched upon it.

Inspector Trout takes the medallion to a jewelry maker who explains that it is but one of a set of ten that he was commissioned to fashion. The symbol carved upon the medallion is the Hebrew word for blood. Leaving the flighty lapidary, Trout then takes the medallion to a Rabbi. The Rabbi tells him of the ten plagues of ancient Egypt. Trout links the medallion to the three established murders as well as an initial murder that took place off-screen prior to the movie (A Professor Thornton had been stung to death by bees – but this is mentioned only and never shown). So the killer is designing his murders to be imitative of the ten plagues of Egypt. Ancient Egypt was devastated with waves of various critters and geological phenomenon because the Pharaoh made the mistake of enslaving the Hebrews and earning himself the ire of Moses. Here's a quick comparative rundown of the ten plagues (for the purposes of this film, gnats and flies have been replaced with rats and bats).

Another physician is introduced, and this bizarre plot begins to flesh itself out a bit more. Inspector Trout visits the home of Doctor Vesalius. There is one thing that links all of the deceased together. All of the physicians, including Vesalius, operated on a woman named Victoria Phibes who had been dying from an undisclosed illness. While the team had been operating, Victoria's husband, Anton Phibes, had been returning from a concert in Switzerland. On his way to the hospital, his car flipped over and exploded. Phibes was burned to "death" and there was nothing left but ashes (or so the story goes). Trout suspects that Phibes may have faked his death and has vowed to kill all of the doctors who failed to save his wife.

Phibes' next victim is a man named Doctor Hedgepath. Hedgepath falls for the oldest trick in the book. As his car is chugging down the road, he sees a Rolls Royce parked off to the side, with the voluptuous Vulnavia standing next to it. He has his driver stop the car. Then he tells his driver to go over and try to help Vulnavia. the driver goes over and looks at the engine. While looking at the engine Dr. Phibes steps out of his car. Hedgepath is locked inside the cab of his limo, and Phibes hooks up a device that pumps snow into the limo, ultimately freezing Doctor Hedgepath to death.

Inspector Trout and Doctor Vesalius decide to work together and track down Anton Phibes. They go to the Phibes family crypt and crack open his coffin. Inside is a container supposedly holding his ashes, but Vesalius theorizes that they could just as easily be the ashes of Phibes' driver who was likewise burned in the crash. They then open the tomb of Victoria Phibes to find it empty.

The next victim is a man named Doctor Kitaj. Kitaj is on vacation and decides to take a trip in his personal single-engine airplane, but Phibes and Vulnavia sneak onto the airfield and fill Kitaj's plane with a horde of rats. Kitaj and his pilot don't realize that a dozen of the rodents are inside of the plane until they are several miles up in the sky. The rats tear into the pilot, forcing the plane to crash into the ground, killing both of them.

By now, Inspector Trout is racing around town trying to find the surviving doctors who once worked on Victoria Phibes. He tries to protect a guy named Doctor Whitcombe at a local mall, but Whitcombe dies when a giant brass unicorn is launched from a catapult, spearing him in the chest and nailing him to a door.

Failing to save Whitcombe, Trout decides that he must protect one of Victoria Phibes' attending nurses named Allen. The police try to secure her a room in the hospital, while the rest of the team stakes out the building looking for Phibes. Doctor Phibes manages to get past their checkpoints and breaks into the room directly above the one Nurse Allen is sleeping in. He drills a hole through the floor and then drips a mysterious, green, syrupy cocktail on top of her. Additionally, Phibes begins pumping in swarms of locusts into her room. The locusts are attracted to the green fluid and they eat at Nurse Allen until there is nothing left but her skull.

Inspector Trout and Doctor Vesalius try to figure out who the next victim might be. Trout realizes that Vesalius is the only physician who has any children. He suspects that Phibes may try to enact the death of the first-born son upon Vesalius' boy, Lem. Racing back to Vesalius' home, they discover that Lem is missing. Doctor Phibes telephones Vesalius and tells him that he must meet him at his place if he wishes to save his son. Trout doesn't want Vesalius to go, as it is obviously a trap, but Vesalius knocks him out with a statue and takes off to save his boy.

Arriving at Phibes' mansion, he finds that Anton has strapped Lem down to an operating table. Implanted inside his chest, just below his heart is a key. The key unlocks a halter, which has been strapped to Lem's neck keeping his body from moving off of the table. Above him is a spiral-shaped tube from which acid will be dripping down onto his face unless his father can operate on him, free the key, unlock the halter and push him out of the way within six minutes. As Vesalius is desperately trying to operate to save his boy, Phibes looks onward, mockingly informing him that the six-minute window he is granting him is equal to the amount of time that the doctors had to work on his wife. Vesalius keeps cutting, and Phibes keeps heckling. To further unnerve him, he even reveals his true face. It has been burned so badly by the accident, that it is little more than a flesh-colored skull. Phibes tells Vulnavia that this is their final mission. He also tells he to go and destroy everything he has created. Phibes leaves Vesalius and his son to their fates.

Meanwhile, Inspector Trout revives at Vesalius' place and races down to Phibes' house to save the good doctor. He runs afoul of Vulnavia and the two square off in the makeshift emergency room just as Vesalius succeeds in freeing his son from the operating table. Trout forces Vulnavia to back up, placing her directly under the ceiling mounted glass tube just as the acid comes down. She screams wildly as the acid melts away her face and she finally dies.

Trout, Vesalius and Lem race around trying to find Doctor Phibes. He has retreated to a secret room where the preserved remains of his wife Victoria are kept. He gets inside a custom made sarcophagus. Then he inserts a catheter into his wrist. This causes him to exchange his blood for embalming fluid. This allows him to seemingly die next to his wife (thus fulfilling the plague of darkness).

The following is a list of the ten plagues of Egypt and how they correspond to Doctor Phibes' victims. 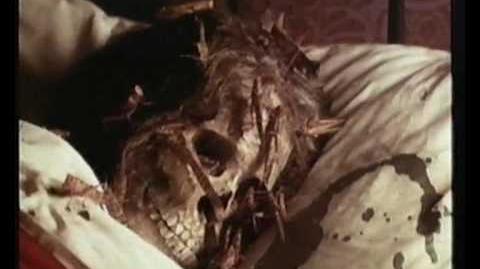