This page needs improvement. It can be improved by: plot, pictures, information, quote on top, trivia

Alice, Sweet Alice (also known as Communion and Holy Terror) is a 1976 horror film directed by Alfred Sole. The plot invoves a young girl who is murdered in a church while preparing for her first communion and her older sister is believed to be the killer.

The film starts as Cathrien Spags and her two daughters are visiting father tom. When they get there Tom gives Karen his mother's crucifix since she's preparing for her first communion her older sister Alice becomes jealousee and puts on a creepy grining mask and scars Mrs. Tredoni FAther Toms housekepper.

Later Alice steels Karens Doll and lures her to a warehouse with it when Karen gets therer Alice jumps out and scares her then locks her in a room when she lets Karen Alice tells her that if she tells Cathrine she'll never see the Doll again. On the big day Karen is pulled away by a person whearing a shiny yellow raincoat and the same mask as Alice and strangles her to death, next Alice appears wakin gin through the side door and takes Karen's place. 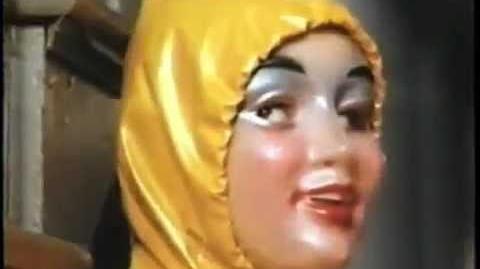 Retrieved from "https://horror.fandom.com/wiki/Alice,_Sweet_Alice_(1976)?oldid=123388"
Community content is available under CC-BY-SA unless otherwise noted.