This page needs improvement. It can be improved by: more pictures, list of deaths

Alien vs Predator is a 2004 science fiction action horror film. It was directed by Paul W.S.Anderson and the screenplay was made by Paul W. S. Anderson and Shane Salerno. starring Sanaa Lathan, Raoul Bova, Lance Henriksen, Ewen Bremner, Colin Salmon and Tommy Flanagan.

It is based on the crossover Alien vs Predator franchise, a concept which originated in a 1989 comic book published by Dark Horse Comics, and it centers around a group of archeologists lead by billionaire Charles Bishop Weyland, who investigate a heat signal coming from the Antartic.

It was followed by Aliens vs. Predator: Requiem.

Warning: this text contains details about the plot/ending of the film.
In outer space, a satellite detects a mysterious heat source

beneath Bouvetøya, an island about one thousand miles north of Antarctica. In response, billionaire capitalist Charles Bishop Weyland collects a group of scientists to investigate the heat source and claim any related discoveries for his international communications company Weyland Industries. The expedition includes palaeontologists, archaeologists, linguistic experts, drillers and Lex Woods, a guide with security provided by Max Stafford and his group of mercenaries.

As the group journeys to Bouvetøya, a spaceship enters Earth's orbit and fires a powerful energy beam towards the basis of the heat source. When the Weyland Industries expedition arrives at the site above the heat source, an abandoned whaling station, they find a massive hole buried deep into the ice by the energy beam, and they descend to investigate. On the base deep below, they discover a mysterious pyramid and explore it, finding sign of an evolution pre-dating written history and also discover a sacrificial chamber filled with skeletons with cracked rib cages. As they explore, one of the members from the expedition steps on a pressure plate that awakens a captive Xenomorph Queen from her artificially enforced cryogenic slumber in a chamber deep within the pyramid.

Meanwhile, three Predators known as Scar, Celtic and Chopper land on Earth and kill many members of the expedition camping at the whaling station, before descending towards the pyramid. Several eggs laid by the Queen are mechanically delivered to the sacrificial chamber, and several members of the expedition still exploring there are trapped inside and impregnated by Facehuggers. Chestbursters emerge from them and quickly develop into adult Xenomorphs. Unaware to these events, the rest of the Weyland Industries group continue on with their exploration and eventually discover the Predator's Plasmacasters in a casket inside the pyramid. Recognizing them as advanced technology, they take them for study but activate a mechanism that causes the pyramid to move its interior every minute.

The group is soon attacked by the Predators and most of the humans are killed, including Stafford and his mercenaries, while several others are taken by the Xenomorphs to be hosts for more species. The alpha Xenomorph known as Grid attacks and kills Chopper, causing Celtic to engage the Xenomorph in combat while the survivors escape. At first, Celtic gets the upper hand by slicing off Grid's tail and traps it in his wire net, where the Xenomorph gets tightened and is scarred with net wounds. Before Celtic can finish off Grid, its acid blood caused the net to dissolve, allowing the Xenomorph to break free and kills the Predator.

Meanwhile, Scar, now the last Predator left, pursues Lex, an archaeologist named Sebastian and Weyland intending to return the stolen Plasmacasters they have taken. Weyland stays to defend himself against Scar while Lex and Sebastian escape, but is killed after he angers the Predator by burning him with a flamethrower when Scar saw that Weyland was weaker and is already dying from cancer. Meanwhile, Lex and Sebastian are separated from Scar by the pyramid's shifting walls. As he waits for a chance to pursue, a Xenomorph and a Facehugger sneak up on the Predator while he is alone and try to subdue him. Scar kills them with his Shuriken, unmasks himself and gives himself a mark of his own using their acid blood. Suddenly, another Facehugger sneaks up on Scar and apparently subdues him due to the Predator not wearing his mask before he could put it back on.

Through translation of the pyramid's symbols, Sebastian and Lex learn that the Predators have been visiting Earth for thousands of years. They taught early humans how to build pyramids and were worshipped as gods. Every year, the Predators would return to Earth so that they would hunt Xenomorphs produced from sacrificial human hosts as the ultimate prey. If the Predators became overwhelmed, they would sacrifice themselves by activating a self-destruct device to eliminate the Xenomorphs, thus explaining the mysterious and rapid disappearance of several ancient cultures.

Scar appears where he finds Lex alone and she returns his stolen Plasmacaster to him rather than the Predator not killing her. When a Xenomorph attacks, Lex impresses Scar by killing it which then he mutilates the dead creature and fashions its parts as weapons for her such as its head as an acid proof shield and its tail as a spear. They make their way into the hive where they find Sebastian alive and cocooned. After he reveals to Lex that the Xenomorphs cannot reach the surface, she is forced to shoot him before a Chestburster erupts from Sebastian's chest, but Scar eventually kills it. Afterward, Scar and Lex then set up Scar's self-destruct device in order to destroy the pyramid as it is the only way to do it, hoping that all the Xenomorphs will all be wiped out when it detonates.

The two successfully escape and reach the surface just before the pyramid and the entire site are completely destroyed. After Scar gives Lex a mark of her own using Xenomorph blood, they are suddenly confronted by the Queen, who was still alive and revealing that she escaped the pyramid before it was destroyed when she was freed from her restraints by the Xenomorphs in her chamber. Scar and Lex fight the Queen until they notice a chain attached to her and tie it onto a water tower. They drop it over a cliff into the ocean which pulls the Queen underwater with it, causing her to sink to her watery grave. However, Scar had been impaled by the Queen's tail in the fight and dies peacefully from heavy wounds.

At that moment, a spaceship uncloaks and several Predators appear before Lex. They collect their fallen companion and the Ancient Predator gifts Lex a spear-like weapon in recognition of her skills as a warrior symbolized by the Xenomorph acid blood Scar had burned on her cheek before he died. The Predators then depart and leave Lex alone, but just as the ship leaves Earth and flies off into outer space, a Chestburster with Predator-like characteristics suddenly erupts from Scar's corpse, beginning the events of Aliens vs. Predator: Requiem.

Alien vs. Predator was first released in North America on August 13, 2004 in 3,395 theaters. It had a budget of $ 60 million and earned a total of $172 million. Alien vs. Predator received negative reviews from film critics, but it was more commercially successful than any of the preceding films in the Alien and Predator franchises, which led to the sequel in 2007 Aliens vs Predator: Requiem. 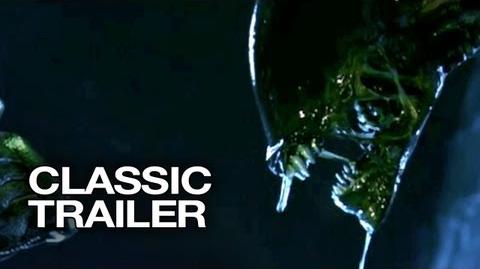 Retrieved from "https://horror.fandom.com/wiki/Alien_vs._Predator_(2004)?oldid=134685"
Community content is available under CC-BY-SA unless otherwise noted.