Alligator is a 1980 monster movie, directed by Lewis Teague with a screenplay by John Sayles. It stars Robert Forster, Robin Riker, and Michael V. Gazzo. It follows the attempts of a police officer named David Madison and a reptile expert named Marisa Kendall to stop a deadly giant alligator that is killing humans in the sewers of Chicago.

The film received praise from critics for its intentional satirizing and, in 1991, an apparent sequel was released, titled Alligator II: The Mutation. Despite the title, this film shared no characters or actors with the original, and the plot was essentially a retread of the first film.[1]

The film opens with a teenaged girl purchasing a baby alligator while on vacation with her family at a tourist trap in Florida. After the family returns home to Chicago, the alligator, named Ramón by the girl, is promptly flushed down the family's toilet by her surly, animal-phobic father and ends up in the city's sewers. Twelve years go by, during which the alligator not only survives, but eventually feeds on covertly discarded pet corpses that are spiked with an experimental growth formula, causing it to grow into a 36 ft-long behemoth with an almost impenetrable hide.

The alligator begins picking off humans in the sewer, and the resulting flow of body parts draws in world-weary police officer David Madison who, after a horribly botched case in St. Louis, has gained a reputation for being lethally unlucky for his assigned partners. As David works on this new case, his boss Chief Clark brings him into contact with reptile expert Marisa Kendall, who years earlier was the girl who bought the alligator. The two of them edge into a prickly romantic relationship, and during a visit to Marisa's house, David bonds with her motormouthed mother.

David's reputation as a partner-killer is "confirmed" when the gator snags the young cop who accompanies David into the sewer searching for clues. No one believes David's story, partly due to a lack of a body, and partly because of Slade, the influential local tycoon who sponsored the illegal growth experiments and therefore does not want the truth to come out. This changes when obnoxious tabloid reporter Thomas Kemp goes snooping in the sewers and supplies graphic and indisputable photographic evidence of the beast at the cost of his own life. Ironically, Kemp had, up until that point, been one of the banes of David's existence.

An attempt by the police to flush out Ramón comes up empty, and David is put on suspension, but then the gator literally smashes his own way out of the sewers and comes to the surface, first killing another police officer, then killing a young boy who gets tossed into a swimming pool during a party. The ensuing city-wide hunt turns into a media circus, including the hiring of pompous big-game hunter Colonel Brock to track the animal. Once again, the effort fails: Brock is killed, the police trip over each other in confusion and Ramón goes on a rampage through a high-society wedding party; among his victims is Slade and the mayor. With only Marisa to help him, David finally lures the alligator into a trap back in the sewers and destroys the beast with a massive charge of explosives, barely escaping with his own life. As the film ends with David and Marisa walking away after the explosion, a drain in the sewer spits out another baby alligator.

Filming took place in and around Los Angeles. Although commentary on the Lions Gate Entertainment DVD gives the location as Chicago, the police vehicles in the film appear to have Missouri license plates. When the young Marisa returns home with her family from their vacation in Florida, they pass a sign that reads "Welcome to Missouri." Later, the voice of a newscaster identifies Marisa as "a native of our city," implying the location is a city in Missouri other than St. Louis.[2]

While the film is both low-budget and derivative of the formula established by the 1975 film Jaws, it has regularly received praise from critics for its (intentional) satirizing and wit, lack of pretension, and the performances of the human stars. Screenwriter Sayles also penned the script for Piranha, another well-received tongue-in-cheek horror film of the era.

Vincent Canby of the New York Times praised the film, saying, "The film's suspense is frequently as genuine as its wit and its fond awareness of the clichés it's using."[3]

Film critic Roger Ebert was not a fan of the movie, suggesting that it would be best to "flush this movie down the toilet to see if it also grows into something big and fearsome."[4]

On September 18, 2007, Lions Gate Entertainment released the film on DVD for the first time in the USA. The disc features a new 16x9 anamorphic widescreen transfer in the original 1.78:1 ratio and a new Dolby Digital 5.1-channel sound mix in addition to the original mono mix. The included extras are a commentary track with director Lewis Teague and star Robert Forster, a featurette titled Alligator Author in which screenwriter John Sayles discusses the differences between his original story and the final screenplay, and the original theatrical trailer. The film had previously been available on DVD in other territories, including a version released in the UK in February 2003 by Anchor Bay Entertainment (now Starz). This release features an optional DTS sound mix, includes the 1991 sequel Alligator II: The Mutation on a second disc, and includes the same Teague-Forster commentary found on the recent Lions Gate US release. 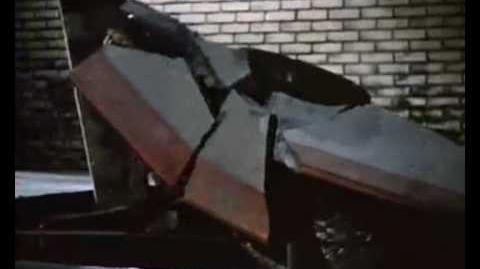 Retrieved from "https://horror.fandom.com/wiki/Alligator_(1980)?oldid=123399"
Community content is available under CC-BY-SA unless otherwise noted.