American Mary is a 2012 horror-drama directed and written by the Soska Sisters, starring Katharine Isabelle in the leading role, with cameos of Soska Sisters themselves and their parents. The film follows the downfall of med student Mary Mason who desperatly in search for money, enters the world of the body modification

The story begins with two black-gloved hands making incisions in a turkey, and stitching the cuts. The hands belong to medical student Mary Mason as she practices on inedible turkey. Later, she's in class, learning about how much time a surgeon has to re-attached amputed limbs, as she called by her telephone company. This results in her teacher, Dr. Grant asking her questions. But even after she gives him the correct answers, he remains malcontent. He believes she is wasting her and his time in his class as she isn't fully concentrated. A surgeon can't make mistake during his job. But unbeknownst to him, she has severe financial problems. Something he learns about in the parking lot of the university. At night, Mary is called by her grandmother, who she calls Nana and ensures her grandmother everything went good with her. She conceals her financial problems and laughs at the suggestion of having a boyfriend while she tried to find a job that offers easy cash. An advertisement for a stripper with no sex requirement, draws her attention and she eventually decides to do it. She prints her resume and goes to the stripclub, The Bourbon. After a short conversation with the owner, Billy Barker, she is ordered by Billy to massage his shoulders to which she complies. But the job interview is cut short as Lance, one of Billy's enforces tells Billy, he have bad news. He disappears for a moment and sends Mary away, only to change his mind. Having read her resume, he knows she's a surgeon in-training. After changing his mind several times, he offers her 5 mille as she can save the life of one of his guys. The man is terrible condition and it is clear that is the result of a torture session that went too far. Mary agrees nevertheless. After the operation, she leaves the Bourbon with her 5 mille but as she returns home, she haves a mental breakdown. For the days that follows, she's scared and paranoid of what she had seen and what she had done. Her paranoia doesn't decrease when a mysterious woman calls her on her phone, asking to speak with doctor Mason. After Mary accidentally gives herself away, she agrees to meet the mysterious Beatress.

As Beatress knocks on the door, Mary unlocks her door but when distracted, she unknowingly gives Beatress the chance to get it. Threatening the intruder with a baseball bat, Mary isn't really reassured by the appearance of Beatress. Beatress asks her to lower the bat and explains to Mary that she had 14 surgical operation to be transformed into the living equivalent of Betty Boop, on which Mary agrees that the surgeons did quite the job. Beatress explains to Mary the reason of her visit and the request to help a friend of her. Her friend, Ruby Realgirl wants someone to finish her, but yet had to find a skilled someone willing to do this. With the promise of getting 2,000 dollar for showing up and 10,000 dollar for the actual procedure, Mary agrees. When it is time, she meets up with Beatress and Ruby at the animal clinic where Beatress' niece, Tessa works. Beatress made a deal with Tessa, so they can use the operation theatre of the animal clinic. And as promised, Beatress has brought the money. Mary goes talk with her patient but when it becomes clear to her what they expect from her, she hesitates. 'Is this really what she want me to do?' But after getting confirmation, she murmurs 'Just checking' and starts the operation.

But her professional life continues and even with complains of Dr. Grant, she keeps to impress people in the hospital. One of these people is Doctor Walsh who asks her if she wants to come to a party. Delighted by the invitation she agrees. But what was meant to be a great evening, wearing a dress she got as a gift of Ruby, turns into a nightmare as Grant drugs her and eventually rapes her. Her already fragile mind shatters and she decides to quit med school. After all, she had already found her true calling. And with the help of Lance and Billy, she haves a plan to become even better. As Billy and Lance drug and kidnap Grant, Mary have him tied up and orders the two that she would have work for a day. As they take their leave, she explains to Grant what she's planning to do with him, something he really doesn't want. But this time he is the victim. In a procedure of 14 hours she mutilates him horrendously. But the work she have done on him, increases her talent and draws the attention of the Demonic Twins from Berlin, the web hostesses of Abstrakt.Me. who discovered her work for the first time due to her work on Ruby. They gave Beatress a call to arrange an appointment with Mary to complete their vision. It is then that Mary discovers that Ruby has a husband. She agrees to work on two sisters and weeks later they arrive in the US. In the Bourbon, one of the sister mutilates a stripper by biting of the tip of her tongue before meeting with Mary. Praising her work, they showcase their wish. Not only is the twin very unsettling, their demand is nigh-impossible for one surgeon. Billy helps her out, by asking a second surgeon, who owns him a favour, to help her. But it becomes clear that Billy is growing scared of Mary and a bit disgusted when talking to her. Something that don't goes unnoticed. She continues her work and helps the twins to fulfil their wish.

But things take a bad turn as police begins investigating the disappearing of Grant. Billy offers her to take care of the problem, an offer she declines. She almost kills the investigator herself until he suggested that Grant might have deserved whatever he had done. Nevertheless, she remains one the suspects which means she has to keep a low profile. Not that everything goes as planned. As she takes picture of the still living Dr. Grant, she is discovered by a security guard. In a desperate attempt to save her own skin, she bludgeoned the guard to death. With a bit remorse to what she had done to him, she looks back at the object of her true anger, Grant. With the help of the guard, he had almost escaped but with the lack of his limbs, he isn't that fast and she quickly takes him out with a taser. As Billy discovers that Dr. Walsh knew more about what had happened to Mary and allowed similar things to happen with other girls, he takes justice in own hands and kills the latter. But after the incident with the guard, even Mary starts to question her own morals. But both Beatress and Lance talks her out of it. According to Lance, she had done what she had to do. And what she had done to Grant, was rightful punishment. He even express his respect for her work. But Billy grew more scared by each passing day, even having nightmares of Mary turning on him. This is partially due to her attack on one of his new strippers after she caught the stripper, fellating Billy. The attack was cut short as Mary came to her senses before she could do any harm but Billy not longer trusts her. The disappearing of a second doctor, didn't go unnoticed either and Mary is quite angry. To put more fuel to the fire, Billy has a third problem, Beatress is gone. Believing she simply left, he doesn't make much of a point of it but he plans a road trip to LA, to get Mary away from this environment for a moment. She promises to think about it but is called by Beatress. Ruby's husband isn't happy with what Mary had done and after forcing Beatress in giving him an adress, he has come to rectify things. But the warning comes far too late as moments later, she's stabbed by the man. In the struggle that follows, she manage to kill her aggressor. She tries to stitch her own stab wound but this fails as she died of haemorrhage. Her lifeless remains are found in her studio by the cops who finally realize what's Mary's revenge was and what had happened with Grant.

The film was shot in Vancouver, British Columbia. There were no visual effects; everything is either practical or Mary's patients are members of the real-life body modification community. The role of Mary was written specifically for Katharine Isabelle. The script was written while they were trying to sell Dead Hooker in a Trunk, and it mirrors some of the experiences that they had in the film industry, such as meeting sleazy people that seem initially reputable.

The Soska sisters' parents re-mortgaged their house in order to raise money to finance the project. As a thank you gift the sisters allowed their parents to cameo in the film.

American Mary premiered at the London FrightFest Film Festival on 27 August 2012. It received a limited theatrical run in the U.S. on 31 May 2013 and became available on video on demand on 16 May 2013. Home media

It was released on DVD and Blu-ray in the UK on 21 January 2013 by Universal Pictures UK. The release includes a behind-the-scenes documentary with cast and crew as well as a feature titled An American Mary in London, which detailed the world premiere.

Rotten Tomatoes, a review aggregator, reports that 56% of 46 surveyed critics gave positive reviews with the consensus stating "It suffers a bit from some uneven acting and an underwhelming climax, but American Mary utilizes pitch black humor and striking visuals to deliver gory, freaky thrills for body horror enthusiasts"; the average rating was 5.5/10. It has score of 46 out of 100 on Metacritic with 15 reviews.

Andy Webster of The New York Times designated it a NYT Critics' Pick and wrote that American Mary "combines gore, quiet dread, feminist conviction and a visual classicism, often using a red palette, with impressive, unbelabored dexterity." Rachel Fox of Twitch Film called the film "thoughtfully restrained and refreshingly nuanced", though she criticized the conclusion as "rushed and muddled".

Scott Weinberg of Fear.Net called the film "easily one of the most fascinating female-themed horror stories of the past few years". Gareth Jones of DreadCentral rated the film 4/5 stars and described it as "thoughtful, absorbing and excellently paced piece of storytelling", though he also criticizes the end as rushed.

Lonnie Nadler of Bloody Disgusting rated it 4/5 stars and called it "a vast improvement" over Dead Hooker in a Trunk. Nadler criticized the second half as weaker than the buildup, but stated American Mary is "a daring new take on rape and revenge and body horror".

Peter Bradshaw of The Guardian rated the film 2/5 and wrote that it is "made with gusto, but there's little dramatic interest for non-enthusiasts." In a mixed review, Dennis Harvey of Variety called the film "outre and entertaining" but "doesn't develop all its narrative and thematic ideas to the fullest."

Gary Goldstein of the Los Angeles Times wrote that the film "turn[s] slack and unfocused after an enticingly lurid, wickedly tense first half." Sherilyn Connelly of the Village Voice called the film "undercooked" and "unevenly paced". 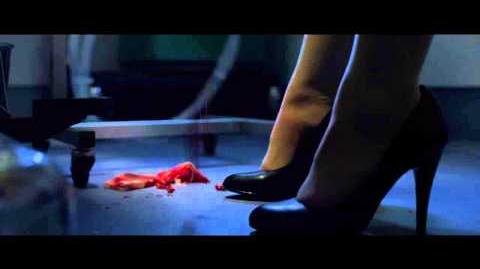 Retrieved from "https://horror.fandom.com/wiki/American_Mary_(2012)?oldid=124982"
Community content is available under CC-BY-SA unless otherwise noted.