Amityville: It's About Time

Paramount Home Entertainment and FremantleMedia North America released the film to DVD with the 1992 removed from the title in July 2005.

When Jacob returns, he informs them that Amityville wants his company to develop a new neighborhood with a timeless concept. Jacob has also brought home an old, mantle clock that he found in the remains of an old house in Amityville. Jacob puts it on the fireplace mantle, stating that it's "what our house has been missing". Once it's on the mantle, however, things take a turn for the worse. It turns out the clock's ticking is incredibly loud, even so it can be heard upstairs. Unknown to the family, the clock attaches itself to the mantle, preventing it from being moved. But the strangest of all, Rusty goes downstairs in the middle of the night and turns on the living room light switch. Every time he flips the switch, the living room is replaced with an ancient-looking orture chamber. This happens until the lightbulb finally burns out.

The next morning, after Lisa and Rusty leave for school (though we later learn Rusty actually skipped school that day), Jacob decides to go jogging. As he reaches the end of the jog his digital watch mysteriously stops. He turns around to find his neighbor Mrs. Tetmann and her dog, Peaches, standing there ominously. Mrs. Tetmann lets go of Peaches and Peaches attacks Jacob, viciously mauling Jacob's leg. Jacob manages to escape by slashing Peaches's face with a broken bottle. At the hospital, the doctor mistakes Andrea for Jacob's wife. He tells her that Jacob's wound will have to be cleaned and rebandaged every few hours. Andrea agrees to stay with Jacob for a few more days until he's able to walk. At home, Jacob doesn't take care of his wounded leg, and refuses to let Andrea clean it out.

Meanwhile, Rusty (skipping school) visits the neighbor, Iris Wheeler. He tells her about what he saw in the living room last night. She assumes that what Rusty saw was an evil force. It was afraid of Rusty and was trying to win him over. She says it would only go to their home because where it used to be is gone: "It must find a new home". When Rusty gets home, Andrea and him go to Mrs. Tetmann's house to ask if Peaches was vaccinated. Mrs. Tetmann doesn't know what they're talking about and says that she and Peaches never even left the house that day. She even shows them Peaches face and there's no trace of a cut. Rusty spends a lot of time thinking about what Iris said.

Jacob, rather than resting, is busy designing a model for a new neighborhood. At dinner, Andrea asks Rusty to go get the phone book from the living room, which usually only takes a minute or two. However, when Rusty (who was talking the whole time) gets back into the living room, three hours have passed. Lisa lets Andrea have her room for the night and she sleeps on the couch in the living room. But the loud ticking from the clock keeps Lisa awake all night. Finally, near 3:00 am, she asks Andrea if she can sleep with her. Andrea says yes and tells Lisa to get her pillow from the living room. But when Lisa gets her pillow, the living room doors slam shut and lock. In Andrea's room, she hears the door open and something gets in bed with her. She finds the other side of the bed drenched in black slime. She turns the light on, but it's not there. Andrea goes downstairs and unlocks the living room doors, letting Lisa out. She suspects that Rusty may have locked them, but he tells her he went for a walk.

The next morning, Andrea learns that Peaches was killed the night before and a swastika has been drawn in blood on Mrs. Tetmann's house. The police suspect that Rusty may have had something to do with it. That night, Andrea's boyfriend Leonard visits and had a hallucination of Jacob shooting him with a gun. The next day, Rusty visits Iris' house and describes to her the things he had seen in his living room and telling her that it all began the night his father had returned home from Amityville. Iris later figures out that it is the clock that's causing everything to go wrong but on her way to warn Rusty she is killed by a duck statue that falls from the roof. Meanwhile, at the Sterling residence things starts to go terribly wrong with Lisa's boyfriend Andy melting into the floor, Leonard encountering goo and a zombie that rises out of the bathtub, and Jacob acting aggressively. Both Lisa and Jacob are now under the clock's complete control, and Rusty is forced to kill Lisa in self-defense. Andrea manages to overcome Jacob's attack, but learns that the clock de-aged Rusty into a child as he tried to destroy it. Andrea orders the clock to let Rusty leave, and she begins to smash open the wall. As she does, she sees giant clockgears inside the wall, and is unable to destroy the clock. As it begins to age her into an old woman, she ignites an exposed gas pipe, causing an explosion.

The clock rewinds back to the first night Jacob brought the clock home. Andrea, however, has regained her memories of the events that took place, and this time she smashes the clock when Jacob comes home with it. When Jacob asks her "What the hell was that all about?!", She replies, "It's about time that's what!". As Andrea departs, Rusty sees Iris standing across the street, and the two exchange smiles, hinting that they have retained their memories of what occurred. 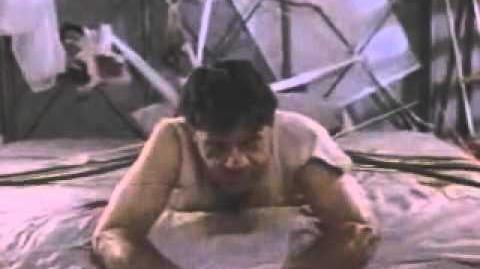 Amityville 6 It's About Time Official Trailer 1992

Retrieved from "https://horror.fandom.com/wiki/Amityville:_It%27s_About_Time_(1992)?oldid=123534"
Community content is available under CC-BY-SA unless otherwise noted.