Amityville: The Awakening is an horror film directed by Franck Khalfoun set to be released on 6 January, 2017. The film is part of the Amityville Horror saga. The film follows an ambitious TV news intern who leads a team of journalists, clergymen and paranormal researchers into an investigation of the most famous haunted house case in the world.

Teenager Belle Walker moves to 112 Ocean Avenue in Amityville, Long Island with her mother Joan, little sister Juliet, and brain-dead twin brother, James. The family's impetus for moving there was to be closer to Dr. Milton, a neurologist hoping to treat James, who suffered an accident that has left him on life support. Upon moving in, Juliet tells Belle that James has been talking to her lately, "using a lot of curse words." One night, James flatlines, but is mysteriously revived and opens his eyes.

At school, Belle is taunted by her peers over moving into the home, which she learns was the site of a mass murder by Ronald DeFeo Jr. in 1974. In her bedroom on the third floor, she discovers blood stains from the murder concealed under the wallpaper. One night, Belle invites acquaintances Terrence—an enthusiast on the Amityville haunting—and Marissa, over to watch The Amityville Horror (1979) at the house. At 3:15am in the middle of the film, the power goes out, and the three go into the basement to locate the fuse box, where they are confronted by Joan, who thinks they are intruders.

Dr. Milton, who suspects James may have locked-in syndrome, performs tests on James that show increased function; during the test, he witnesses an apparition of flies filling the room and attacking him, and leaves the house, shaken. James quickly gains the ability to communicate with the family via an AAC computer system that allows him to type by looking at the letters on a screen. Terrence suggests to Belle that James's sudden revival may be a result of possession stemming from the house; he and Belle suspect that a ring on the ground surrounding the house may represent a magic circle.

Belle asks James if someone else is inhabiting his body, and he replies "yes" and "help" via the computer. He asks her to kill him, and she begins to unplug the machine, but he suddenly attacks her. Joan enters the room, and finds that James is now breathing on his own. After finding the red room in the basement, which she believes to be the source of the power, Belle confronts her mother with the theory that the house is possessing James. Joan reveals to her that, having lost her faith in God after the death of her husband and James's subsequent accident, she moved the family to the home hoping to harness the demonic energy there in order to bring James back to life.

That night, as Belle prepares to leave, Joan knocks her unconscious. Belle awakens at 3:15am, just as her aunt Candice arrives at the house. James rises from his bed, and harnesses energy from the red room, which revitalizes his body. Belle makes her way downstairs as Candice enters the house, but James shoots and kills Candice. Belle retrieves Juliet from her room, but is unable to open the front door. Joan is confronted by James in her bedroom; knowing she is facing death, she retrieves her crucifix, and holds it toward James, but he is unaffected; he reminds her that with the loss of her faith in god, he’s now not here to save her. He shoots her in the chest, then he throws her on the bed before finishing her off. He then lures Juliet to the third floor, where he attempts to kill her, but is stopped by Belle, who tackles him, resulting in them both falling from the window. She drags James outside the circle, after which his body withers, and he dies just after telling her "thank you."

A newsreel epilogue reveals that Belle is being questioned in the murders of her mother, aunt, and brother, but that her sister, Juliet, corroborates her story, and that James's fingerprints were discovered on the murder weapon. Another news report comments on yet another tragedy occurring in the Amityville house. 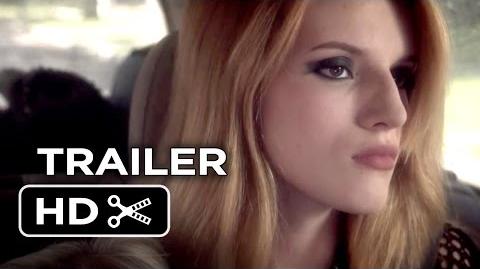 Retrieved from "https://horror.fandom.com/wiki/Amityville:_The_Awakening_(2017)?oldid=136620"
Community content is available under CC-BY-SA unless otherwise noted.