Amityville 3-D (also known as Amityville III: The Demon) is a 1983 American horror film and the third installment in the The Amityville Horror series. It was one of a spate of 3-D films released in the early '80s. The film was directed by Richard Fleischer and the script was written by David Ambrose (under the pseudonym William Wales).

It was the only Orion Pictures film filmed in 3-D. Due to a lawsuit between the Lutz family and Dino De Laurentiis over the storyline which did not involve the Lutz family, Amityville 3-D was not called a sequel. However the film does make reference to the original Amityville Horror story. The character of John Baxter is loosely based on Stephen Kaplan who at the time was trying to prove the Lutzes' story was a hoax.

After exposing a pair of con artists with his partner Melanie in the infamous 112 Ocean Avenue house in Amityville recently divorced Reveal magazine employee John Baxter (Tony Roberts) purchases the house after being persuaded to by real estate agent Clifford Sanders. While preparing the house for John, Clifford goes into it alone and, hearing footsteps in the attic, goes upstairs to investigate and is locked in the room, where he is swarmed by flies and is found dead of a presumed heart attack or stroke by John. Thinking nothing of Clifford's death, even after Melanie shows him some photos she took of the real estate agent before his death which depict him as a rotting corpse, John moves into the house and lives there, adamant that the house is normal and telling Melanie to later meet him there.

While John works (and experiences elevator trouble presumably caused by the house from afar) Melanie goes to the house and makes her way inside, eventually finding the maid and is spooked; the maid leaves shortly afterward. Left alone, Melanie goes down into the basement to check the fuse box when she feels a strange breeze; frightened, she heads back upstairs when the door to the basement flies open on its own and blasts her with an Arctic gale. She is found later that night by John, cowering and hysterical against the wall.

Her attempts to convince John that something is inside the house falls on deaf ears. Later, while looking over blowups of the photos of Clifford, Melanie discovers a demonic-looking face in the pictures and rushes to reach John, but crashes her car and dies when the photographs burst into flames and burn her to a charred skeleton, the car going up in flames shortly afterward. Melanie's death is ruled accidental by everyone, including John, who remains oblivious to the evil in his home.

While John is away one day his daughter Susan and her friend Lisa (who is obsessed with the history of the house, claiming it was built on an Indian burial ground) take some boys to the house and use a Ouija board in the attic, but stop the game when the board tells them Susan is in danger before the glass they were using smashes itself against the wall. Susan's friends assume she was playing a prank. Growing bored, Susan and the others go out in John's motorboat while Susan's mother Nancy searches the house for her daughter, who walks in the door drenched moments later. After Nancy calls out at her, Susan turns and smiles at her, then ignores Nancy and makes her way upstairs, locking herself in her room. Outside John arrives with groceries and, seeing a commotion on the docks, goes to see what is wrong and finds Susan's lifeless body being tended to, her friends telling him she fell out of the boat. When Nancy arrives at the scene John tells her what happened, causing Nancy to go into hysterics and tell him she saw Susan in the house moments ago before rushing back inside, convinced Susan is either still there or will be shortly, refusing to leave, even for Susan's funeral.

After having nightmares about the old well in the basement (a supposed gateway to Hell) John, unable to deal with Nancy's delusions that Susan is still alive, consults his friend Doctor Elliot West about what he should do. West suggests that John allow him and a team of paranormal investigators to set up in the house, to help prove if Nancy actually saw something or not, which John agrees to. As Elliot, John and the team wait, Nancy sits by Susan's bed and is soon confronted by a spectral being speaking in Susan's voice, which goads her into following it into the basement, where the old well has filled with liquid. Following Nancy and the being, John and Elliot begin trying to goad whatever is in the well to reveal itself and let Susan (who they believe can come back) go. While near the well Elliot is burned and dragged into the depths by a demon and Susan's specter disappears as John and Nancy flee upstairs, telling Elliot's team to run. As the house quakes and starts coming apart, freezing on the inside, most of Elliot's team is killed by flying and exploding objects while John and Nancy and several others escape out a window just before the house blows up. While the remaining paranormal investigators flee, John and Nancy watch as the rubble of the house burns to the ground and the old well bubbles ominously. A fly is later seen emerging from it and disappears.

Like the previous installment, Amityville 3-D filmed the exterior scenes at the same house in Toms River, New Jersey and a house nearby for the exterior of Nancy's house. The interior was a set in a Mexico studio. The filmmakers almost never got the house to film at again. It was scheduled to be picked up and moved over one lot. They were just able to film the exterior shots before the house was moved. Originally the house had four quarter shaped moon windows, two on both sides. However, by the time of filming in 3D, the owners of the house did not want the eye windows on the side of the house facing the road so they modified them to look like small ordinary square windows. All shots of the "eye" windows (except for the most noticeable scene when John and Susan pull up to the house) had to be filmed on the side facing the river that has the sundeck. 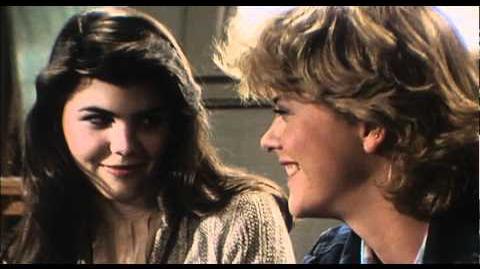 Retrieved from "https://horror.fandom.com/wiki/Amityville_3-D_(1983)?oldid=123425"
Community content is available under CC-BY-SA unless otherwise noted.