This was the only Amityville sequel to be based on a book in the main book series. Amityville: The Horror Returns was also going to air on NBC but the film was never made.

The movie begins on a rainy night. We see the infamous Amityville Horror house. Six priests, led by Father Manfred enter the house and start to exorcise it. One of the priests, Father Dennis Kibbler is in an upstairs bedroom and begins to bless it when he sees a glowing brass floor lamp. As he begins to chant, a burst of energy emerges from the outlet, through the cord, and into the lamp. A demonic face appears in the large round bulb. Kibbler is knocked across the room and is unconscious.

A few days later, the real estate agency decides to have a yard sale by selling the items left in the house by the previous owners. Father Manfred believes that the evil spirits are finally gone from the house. Meanwhile, at the yard sale, a woman named Helen Royce and her friend Rhona are looking through the items when Helen finds the lamp. At only $100.00, Helen decides to buy the lamp. She even decides to send it to her sister as a birthday present, explaining that she and her sister send each other rather ugly gifts to each other as jokes. While checking the lamp, Helen cuts her finger on a brass collar around the bulb. Ignoring the cut on her finger, Helen buys the lamp. As the day goes on, Helen's finger begins to get infected and discolored.

One week later, the lamp arrives to the sister. Helen's sister, Alice Leacock, lives in a large, three story home over a beach in a small town called Dancott, California. That day, Alice's daughter, Nancy Evans and her three children Amanda, Brian, and the youngest child, quiet, mysterious Jessica move in with Alice. Once they arrive, Alice decides to open the package containing the lamp. Nancy thinks the lamp is hideous, while Alice finds it to be interesting. Once the lamp is turned on, Alice's parrot, Fred, begins to act crazy, and her cat, Pepper, scratches Amanda. While the rest of the family pays little to no attention to the lamp, Jessica seems to be drawn towards it.

Despite the destruction of the house in the conclusion of the previous film it manages to make an appearance in this film. The films after 3-D usually do not pick up where the previous film left off, so no explanation has ever been given as to how the house is still standing. It is possible this film may take place before Amityville 3-D due to the house already being empty in that film, and after the yard sale in this one. The furniture that was left in the house in the beginning of the film is believed to be owned by the Lutz family in the first movie. The film also makes a reference to Amityville II: The Possession.

On the The A.V. Club web site, Amityville 4 is one movie listed in the article "Night of the Killer Lamp: 23 Ridiculous Horror-Movie Adversaries". The article states the film's efforts to make a possessed lamp seem scary "border on camp".

The replica of the original Amityville house was located at 402 East M St., Wilmington, California. A facade was added to the side of the house to give it the Amityville appearance. The interiors of this house were filmed also.

The exteriors for Alice Leacock's house were filmed at the James Sharp House, 11840 W. Telegraph Rd, Santa Paula, California. The house is an historical Italian Villa style home built in 1890. In reality, it does not back out onto an oceanside cliff as depicted in the movie. Instead, it backs out onto the Santa Paula Freeway, about a quarter of a mile behind the house. For a second, you can see the tower of the house in the distance while driving on the Freeway.

The interiors of the grandmother's house were filmed at the Woodbury-Story House in Altadena, California. An exterior shot of the John Marshall High School in Los Angeles, California was also used. 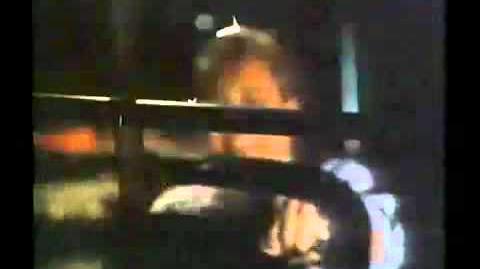 Retrieved from "https://horror.fandom.com/wiki/Amityville_4:_The_Evil_Escapes_(1989)?oldid=123428"
Community content is available under CC-BY-SA unless otherwise noted.