Amityville Dollhouse is the eighth installment in the Amityville Horror saga, released directly to video in 1996. Lionsgate Home Entertainment released the film on DVD in 2004. It received poor reviews and was not a success on home video.

Newlyweds Bill and Claire Martin move their new family into a new house constructed by Bill himself. Shortly after moving in Bill finds a doll house (Modeled after 112 Ocean Avenue) in the shed. He brings it in the house and puts it in the garage. Later that night the doll house comes to life and makes the fireplace turn on. Bill wakes up at night as it is extremely hot. He goes downstairs and shuts the fireplace off. He then goes into the garage to fix the AC without noticing the dollhouse is all lit up. He goes back inside the house to find the fireplace on again and this time it won't shut off. Bill sits on the couch and has a dream of Jessica in the fireplace, who asks for help. Claire wakes him up. The next day a flame bursts out of the stove, and Bill discovers that the bike he bought Jessica for her birthday has been run over by his truck. Claire spots the doll house and suggests giving Jessica that instead. For the party Bill's sister Marla and her husband Tobias arrive.

Jessica likes the pretty doll-house. Examining it in front of the guests, she discovers a chest, filled with hand-made dolls. Tobias and his wife exchange worried glances and obviously recognize the dolls as something dangerous. Every night the dollhouse causes problems in the house. When the mouse of Claire's son Jimmy (Bill's stepson) escapes from the boy and gets into the dollhouse, Bill's daughter watches it, and as she mentions that the mouse is in her room, an enormous white mouse appears under her bed. When Claire and Bill try to make love in their bedroom, Claire notices the picture of Bill's elder son, Todd, on the chest and feels like making love with the boy instead of her husband. Days pass and her feelings to the boy get worse, whereas she cannot understand what is going on. Bill is having nightmares with voodoo-dolls, demons and his family being killed. From his conversation with Marla we learn that at the age of 10 he also had similar nightmares about the fire in the house of his parents. That time nobody believed him and when the fire happened, his parents died. He is worried and annoyed with these dreams. Jessica understands that the dollhouse has something to do with the troubles. She starts writing down "the rules" having to do with the house, like "The house can hear me". Jimmy is visited by his long-dead father. The zombie-father insists that Bill wants no good for Jimmy and that Jimmy should kill him.

Marla brings some herbals for Jessica, as Jessica is somehow affected by the dollhouse and is not well, and sneaks one of the voodoo-dolls from the chest in the dollhouse. Todd is dating his girl-friend Dana in the shed near their house. There Dana discovers a news-paper cut, which explains that Bill has built a house on the place of a burnt one, leaving the fireplace and the chimney as they were. As the teenagers are going to make love, a strange fly comes from the ceiling and bites Dana, and she takes a hysterical leave. As Todd tries to kill the fly, he bumps his head on the table and the fly gets into his ear. Luckily Dana brings Bill just in time to save Todd and get the fly out. The next day, Bill and Claire go out, and Todd is left to babysit Jimmy and Jessica. He sends them to bed and invites Dana over for drinks. While Todd is mixing cocktails in the kitchen, Dana observes the fireplace as bizarre markings appear on her arm. As if in gruesome reply to Jessica's earlier taunt, the dollhouse strikes out again, this time causing Dana's head to burst into flames. Todd is finally able to hear her agonized hysterics over the noise of the blender and rushes to save her, putting out the flames. But he is too late: hideous, disfiguring burns cover Dana's scalp and much of her face. Critically injured, she is taken to the hospital. Anguished and furious, Todd blames his father for the freak accident, as it was believed to be a faulty coil in the gas line. Later that night, Todd arrives back from the hospital and informs Claire that Dana has entered a coma as a result of her grievous injuries (it is implied she will not survive the night). Meanwhile, Marla and Tobias are making some kind of witch-craft, using the doll, sneaked from the chest in the dollhouse. During the session, the voodoo-doll sits up inside the pentagram (or something else on the table) and makes objects fly around, explode and hit Marla and Tobias. Marla gets hit with a bookcase, and Tobias manages to pierce the doll with his knife. To his surprise, a really big fly is extracted from the body of the doll. He rushes to help Marla out from under the bookcase, and as she is relieved, she tells him to get to Martins' immediately.

Jimmy is once again visited with his father. He understands that it must be something evil and has no part of it. Though the zombie insists that they should kill Bill. Bill enters the room, spots the zombie and forces the boy out of his room. Then he takes a fight with the zombie. Claire sees a bruise on Jimmy's face and thinks Bill must have done it, and not listening to his excuses, shuts the door in Bill's face, leaving him outside. Her zombie-husband appears then, ties her and Jimmy and makes them sit in front of the fireplace, listening to fairy-tales. Bill tries to get to the house through the garage, but incidentally the car starts by itself and the rolling gate of the garage closes. Bill, poisoned with exhausted gases from the car, falls on the floor. At this time Tobias arrives and frees Bill from the garage. They get to the house together, Bills starts to fight with the zombie, and Tobias brings the voodoo-doll of the zombie with him. Jimmy manages to throw it into the fire and the zombie burns and disappears. Todd is visited by the ghost or the zombie of his girl-friend Dana, who should be in the hospital. The zombie tries to kill him, but Claire rescues him. Bill tries to escape the house with his family, but Jessica is gone. Tobias finds her notes with the rules about the dollhouse, which say: "My hand disappears in the fireplace". The men understand that the fireplace is a gateway to somewhere else. Bill goes first and Tobias follows. They get to the dollhouse, where Jessica is sitting on the floor, surrounded with bloody shells of voodoo-dolls. Monstrous demons, which Bill saw in his nightmares, have gotten out of the dolls and are about to attack the girl and her company. Tobias casts some kind of a protective spell, which allows Bill and Jessica to escape through a door. They get out, but Tobias is dragged by the demons and obviously killed. Bill destroys the dollhouse by tossing it into the fireplace. They drive away as the house explodes. Bill tells Claire they will build another house but Claire says "let's just rent next time!" Jimmy tells Todd that his father is a great man but the house was definitely not up to code and the thought of Bill being a contractor really scares him. Todd agrees. They drive away as the house continues to burn. 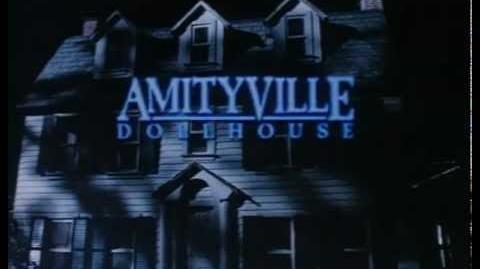 Retrieved from "https://horror.fandom.com/wiki/Amityville_Dollhouse_(1996)?oldid=123509"
Community content is available under CC-BY-SA unless otherwise noted.