This page needs improvement. It can be improved by: plot, pictures, list of deaths quote on top

Amityville II: The Possession is a 1982 horror film directed by Damiano Damiani. The screenplay by Tommy Lee Wallace is based on the novel Murder in Amityville by the parapsychologist Hans Holzer. It is a prequel to The Amityville Horror, set at 112 Ocean Avenue and featuring the fictional Montelli family loosely based on the DeFeo family. The cast includes Academy Award nominee Burt Young who was finding fame in Rocky at the time; there are a few references to the Rocky films within Amityville II. It is the second film in the Amityville Horror saga.

Amityville II set the pattern for low-budget sequels with little reference to real life events in Amityville, and is the only other film in the series to feature music composed by Lalo Schifrin. Also, this film is considered as the darkest and most frightening of the Amityville saga.

The Montelli family move into what they think will be the house of their dreams, but there is an evil presence lurking within. Demons terrorize the family, causing them to fall apart. The mother tries to get the local priest, Father Adamsky, to bless the house but he is driven away by her abusive, atheist and anti-religious husband before he can properly help.

The oldest son, Sonny, falls victim to demonic possession. During his possession he gets his sister to play a game where he is a famous photographer and she is his model. She agrees and eventually ends up naked and has sex with him. The evil spirits cause Sonny to tear the family apart and he is forced to murder his parents and siblings. Father Adamsky realizes Sonny is possessed and asks the church for permission to perform an exorcism but this is refused when they didn't believe him. He therefore takes it upon himself to free Sonny's soul, although freeing him, he ends up possessed by the demon instead.

What happens to Adamsky is unknown and the house is put on sale, awaiting the Lutz's arrival.

George Lutz wanted the sequel to the 1979 film to be based on the book The Amityville Horror Part II by John G. Jones, but the producer Dino De Laurentiis secured a deal with American International Pictures for a sequel based on Murder in Amityville by Hans Holzer. Lutz sued De Laurentiis and ultimately lost, but succeeded in having posters placed in theaters stating "This film has no affiliation with George and Kathy Lutz."[1]

Outdoor shots were filmed in Toms River New Jersey. Before production began, it was decided a set would be created for this movie and the Interior of the Toms River House would not be needed. The reason for a set instead was because the production crew had to ruin the house a few times through the movie most notably the end of the film. It is also believed that during filming of the first film the fake blood that ran down the walls reportedly stained the walls. Indoor scenes were filmed in Mexico. The explosion scene at the end of the film was real during filming. A highly explosive chemical which produces flames that burn out instantly was used. During filming of the explosion scene at the end of the movie the effect reportedly backfired and burned the side of the house.

While a prequel, Amityville II contradicts the opening of the 1979 film which shows the family massacre, and like the actual event they are all sleeping. The bodies are also removed from the house in the morning, but in the first film it's in the middle of the night. Some of the family drama in the film did happen to the Defeos, but are exaggerated. The story introduces speculative and controversial themes, including an incestuous relationship between Sonny Montelli and his teenaged sister, who are based loosely on Ronald DeFeo, Jr. and his sister Dawn. Though supposedly set one year before the first Amityville Horror film, Amityville II is full of elements that are clearly from the 1980s. Such as a miniature "Walkman" radio/headphone set and the presence of 1982 cars, televisions, etc. This has caused some series fans to speculate that Amityville II, despite being based on a book/events that took place before The Amityville Horror, actually takes place after the events of the first film and represents a second massacre.

Amityville II: The Possession received mixed to negative reviews. Critics claimed this film went overboard with the effects and the storyline was not as interesting as expected to be.[2] Roger Ebert of the Chicago Sun-Times, who gave the first film a negative review, claimed the film "is actually slightly better than The Amityville Horror" and mentioned some good technical credits and performances.[3] Although actress Rutanya Alda was nominated as Worst Supporting Actress at the 1982 Golden Raspberry Awards, again.

Despite most negative reviews, this film was a commercial success, ranking #1 at the box office.

On the DVD commentary of the 2005 remake of The Amityville Horror, the producers talked about making either a sequel or a prequel. The prequel would be titled "The DeFeos" but the film was dropped for a sequel which is due out in 2010. However the sequel was never made it before. 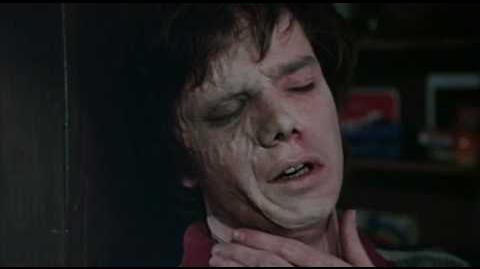 Retrieved from "https://horror.fandom.com/wiki/Amityville_II:_The_Possession_(1982)?oldid=138384"
Community content is available under CC-BY-SA unless otherwise noted.