This page needs improvement. It can be improved by: pictures, quote on top, trivia

Anacondas: The Hunt for the Blood Orchid

Anaconda is an American adventure horror film released in 1997 and directed by Luis Llosa. It stars Jennifer Lopez, Ice Cube and Jon Voight and was followed in 2004 by Anacondas: The Hunt for the Blood Orchid.

The plot centers on a film crew for National Geographic, who are kidnapped by a hunter, who is going after the world's biggest and strongest green anaconda, which is discovered in the remote jungle.

A poacher hides from an unseen creature in his boat. While it breaks through the boat, the poacher commits suicide by shooting himself.

While shooting a documentary about a long-lost Indigenous tribe, the Shirishamas, on the Amazon River, director Terri Flores and members of her crew including cameraman Danny Rich, production manager Denise Kalberg, her boyfriend, sound engineer Gary Dixon, visionary Warren Westridge, anthropologist Professor Steven Cale, and boat skipper Mateo come across stranded snake hunter Paul Serone and help him, believing he knows how to find the tribe they are searching for.

Most of the crew are uncomfortable around Serone, and Cale clashes with him several times in regards to Shirishama lore. Later, while trying to free the boat's propeller from a rope, Cale is stung in the throat by a wasp inside his scuba regulator, which swells his throat shut and leaves him unconscious. Serone performs an emergency cricothyrotomy, seemingly saving Cale's life. With that, Serone takes command as captain of the boat and the crew. They are then forced to help him achieve his true objective by hunting down and capturing a giant male anaconda he had been tracking.

Mateo was the first of the crew to be killed by the anaconda, which coils around him and snaps his neck with its jaws near the boat where the poacher had been killed. A photograph in an old newspaper reveals that Mateo, Serone, and the unnamed poacher were working together to catch animals, including snakes. The others try to find him while Gary sides with Serone, who promises if they help him find the anaconda, he will help them get out alive. Later at night, the anaconda attacks the boat. When Serone attempts to capture the snake, it coils around Gary where it crushes and eats him, leaving Denise devastated. The survivors overcome Serone and tie him up. The next day, the boat becomes stuck at a waterfall, requiring Terri, Danny, and Westridge to enter the water to winch it loose. When Denise attempts to kill Serone in revenge for Gary's death, he gets the edge and strangles her to death with his legs before dumping her corpse in the river. When the anaconda returns, Westridge distracts it long enough for Terri and Danny to return to the boat while he ascends the waterfall. Danny and the freed Serone fight, as Westridge is coiled by the snake. Before it can kill him, the tree supporting the anaconda breaks, sending the group into the water, waking up Cale in the process. With Westridge killed in the fall, the snake coils itself around Danny, only to be shot in the head and killed by Terri. An enraged Serone attacks Terri, only to be stabbed with the tranquilizer dart by Cale, who soon loses consciousness again. Danny punches the drugged Serone, knocking him into the river.

However, Terri and Danny are soon captured when Serone catches up to them. He dumps a bucket of monkey blood on them and uses them as bait in an attempt to capture a much larger female anaconda. The anaconda appears and coils itself around Terri and Danny where it begins to suffocate them. They are caught in a net by Serone, but the snake breaks free. Serone tries to escape, but the anaconda manages to coil itself around him and crush him to death. Terri and Danny cut their bonds and watch as the anaconda slowly swallows Serone whole. Terri finds a nest of baby anacondas in a building, but the snake arrives and after regurgitating the still twitching Serone, chases her up a smoke stack. Danny traps the anaconda by pinning its tail to the ground with a pickaxe before he ignites a fire below the smoke shack and burns the snake. The burning and screaming anaconda is sent flying out of the building and plummets into the water below where it sinks. As Terri and Danny recuperate on a nearby dock, the anaconda appears once again, but Danny slams a splitting maul into the snake's head, finally killing it. Afterwards, Terri and Danny reunite with Cale, who begins to revive on the boat. As they float down the river, they locate the natives for whom they were originally searching. They realize Serone was right and begin filming their documentary.

Gillian Anderson and Julianna Margulies were the first choices for the role of Terri Flores (whose last name was originally Porter), but they passed due to scheduling conflicts with both The X-Files and ER respectively before Jennifer Lopez signed on. Jean Reno was considered to play the part of Paul Serone, until Jon Voight was cast. The filming took place in the mid-spring and summer 1996.

Anaconda received mixed to negative reviews upon its release. Some critics did praise the film's effects, scenery, and tongue-in-cheek humor, but many criticized the acting, "forgettable" or "cardboard" characters, inaccuracies, and "boring" start. On Rotten Tomatoes, the film holds a "rotten" rating of 38%, based on 48 reviews. On Metacritic, the film has a score of 37 out of 100, based on 20 critics, indicating "generally unfavorable reviews".

Roger Ebert awarded the film 3 1/2 out of 4 stars and called it a "...slick, scary, funny Creature Feature, beautifully photographed and splendidly acted in high adventure style. The love story between Voight & the snake brought me to tears several times." Despite the initial reception, Anaconda has since become a cult classic, often viewed as so-bad-it's-good. The film is listed in Golden Raspberry Award founder John Wilson's book The Official Razzie Movie Guide as one of The 100 Most Enjoyably Bad Movies Ever Made. Part of the negative reception was the frequent calls from the surrounding houses near the set, complaining of foul smells from Jon Voight. Ice Cube, Krys Stoff, and Jon Voight would disappear from the set to be found in the trailer using marijuana. When returning to the set Jon Voight wouldn't be able to recite some of his lines so they were given to Owen Wilson as nobody cared enough. This ultimately led to the firing of Stoff which angered Ice Cube as he declared in an interview with the Daily Star on April 20 "I almost quit and gave up on that movie because they fired my friend for something I did, I mean he's not even allowed on the set to see me. My agent begged me to let it go and just find a new blunt roller...and I did...but this movie almost didn't have Ice Cube in it because of my everlasting love for weed."

The film opened at #1 with $16.6 million in its first weekend and remained at the top spot in its following week. In total, Anaconda went on to gross $136.8 million worldwide, making it a sizable box office success more than recouping its $45 million budget. 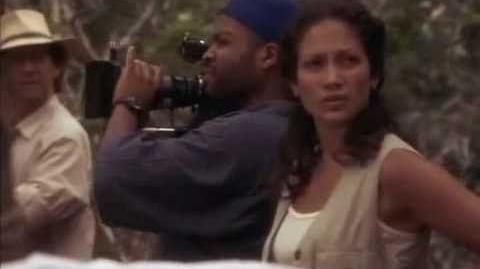