Anacondas: The Hunt for the Blood Orchid

Anacondas: The Hunt for the Blood Orchid is a 2004 horror-thriller film and the stand-alone sequel to the 1997 film Anaconda. The film is directed by Dwight H. Little and is starring Johnny Messner, Kadee Strickland and Matthew Marsden.

Warning: this text contains details about the plot/ending of the film.
A team of researchers sets off into an island of South Kalimantan and West Kalimantan to search for a "blood orchid", a flower they believe can be used as a type of fountain of youth. The team ends up going over a waterfall and having to wade through the river. A giant anaconda emerges from the water and swallows Dr. Ben Douglas (Nicholas Gonzalez) whole, while the rest of the team escapes the river. Bill Johnson (Johnny Messner) attempts to assure them that it was the largest snake he's ever seen and that it should take weeks' for it to grow hungry again, however most of the team demands that the expedition be called off. After Gail Stern (Salli Richardson-Whitfield) decides they can call the police, the team decide to travel to Bill's friend, John Livingston (Andy Anderson) who lives on the river to see if he can borrow his boat and his whale. While traveling to the boat, Bill tells Sam Rogers (KaDee Strickland) about Jack bribing him into taking the unsafe route. Along the way, Bill finds an infestation of leeches on Cole Burris' back and burns all of them with his lighter while Tran Wu (Karl Yune) finds a poisonous spider in Gordon Mitchell's shoe.

Jack decides to take the spider along for further study and then everyone resumes the journey to the boat. However, Livingston is killed and murdered in cold blood by another anaconda and his boat crashes into the riverbank. The team sees an explosion and finds the boat wrecked and are disappointed for losing their chance for escape from the jungle and find only a few essentials for their quest. While continuing their journey, they find Livingston's chewed up corpse. Bill realizes that it must be mating season, which means all of the male anacondas come out of their territories to find the nearest female in their mating pit. The team find themselves in a small native village consisting of thatched huts where a disemboweled anaconda with a pair of human legs hanging out of the snake's abdomen is displayed. The team speculates that the snakes are unusually large in size because their lives have been extended through the orchids, which are a part of the local food chain. Jack says that since they must be close to the orchids, they should press on. However the others contend that there's no evidence that the orchids will have the same effect on humans and still want to leave, so they start building an escape raft.

Meanwhile, Gordon (Morris Chestnut) discovers that Jack had secretly obtained Livingston's private case containing a radio and a gun and realizes he could have called for help long ago. When Jack is unable to convince him to allow the expedition to continue, he paralyzes him using the spider. As Jack joins the others at the raft, Samantha discovers a paralyzed Gordon and notices the spider bite on his arm. While Samantha was interrogating Jack about what he had done to Gordon, an anaconda drops down from the rafters and swallows Gordon alive soon after she leaves the building. The others arrive just as it finishes, so Bill sets the building on fire. Jack uses the commotion to steal the raft. With no more material to make another raft, they decide to bushwhack through the jungle to beat Jack to the orchids and get back their raft. On the way they fall into a cave trying to escape an anaconda. Cole gets lost and panics after finding a skeletons. He runs into Tran. Together they make their way back to the others. Along the way, Tran falls through a hole in the cave floor. Unable to escape, he's eaten alive by an anaconda underwater. The terrified Cole manages to make his way back to the team, escaping the caves behind them seconds ahead of the snake. It follows them through the hole, and attacks them. Samantha uses a machete to behead the snake, but Cole is captured and snatched by another giant anaconda.

The team follows and find him being constricted, but still alive. Bill throws his knife/dagger and impales the snake through the head, killing it instantly and freeing Cole. The group finds the raft just as Jack finds the blood orchids, hanging precariously above a pit in which a ball of male anacondas are mating with the female. Jack shoots Bill in the arm, injuring him in the process, and forces the party to accompany him to the orchids. He has Samantha cross the pit via a thin log to fill a backpack with orchids. As she makes her way back, the log starts to crack. Jack orders her to throw him the backpack, but Samantha counters to threaten to drop the flowers into the pit unless he drops the gun. The log breaks and she falls, landing halfway down the pit. As the others help her climb out, Jack tries to get the backpack. The spider he used to paralyze Gordon escapes its jar and bites him. Jack falls to his death into the pit and is devoured alive as revenge for his deception and betrayal, as Samantha and the others escape. The female anaconda notices them, but Gail Stern (Salli Richardson) tricks the giant snake into biting their fuel container. Bill tries to shoot the container, but the gun is empty. Cole shoots it with a flare, causing a chain reaction that kills the snakes, along with all the blood orchids as well. One of the five survivors Bill, Samantha, Cole, Gail, and Bill's pet monkey Kong make it back to the raft and leave. As they set off with their raft, Bill suggests another shortcut, but the others say no.

List of deaths in Anacondas: The Hunt for the Blood Orchid. 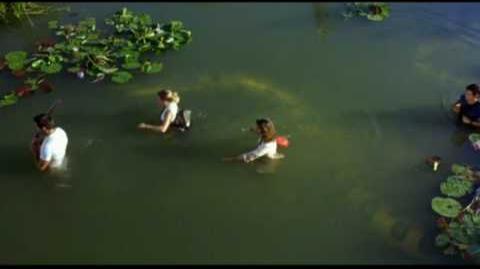 ANACONDAS - THE HUNT FOR THE BLOOD ORCHID Official Movie Trailer

Retrieved from "https://horror.fandom.com/wiki/Anacondas:_The_Hunt_for_the_Blood_Orchid_(2004)?oldid=141488"
Community content is available under CC-BY-SA unless otherwise noted.