Anna and the Apocalypse

Anna and the Apocalypse is a Christmas comedy, musical and horror film that was released on November 30, 2018. The film was directed by John McPhail from a screenplay by Alan McDonald and Ryan McHenry. It is based on McHenry's short Zombie Musical.

A zombie apocalypse threatens the sleepy town of Little Haven - at Christmas - forcing Anna and her friends to fight, slash and sing their way to survival, facing the undead in a desperate race to reach their loved ones. But they soon discover that no one is safe in this new world, and with civilization falling apart around them, the only people they can truly rely on are each other.

In Little Haven, Scotland, Anna Shepherd, who is about to finish school and plans to travel for a year before attending university, much to the displeasure of her widower father Tony. Her friends are dealing with their own issues: her best friend and artist John is secretly in love with her, budding filmmaker Chris is struggling with a class assignment, and transfer student Steph is trying to get her social justice reporting past the tyrannical vice principal Mr. Savage. Nick, Anna's one night stand, is also making her life difficult. The night of the school Christmas show, in which Chris's girlfriend Lisa is performing, Anna and John are working in the local bowling alley and Chris and Steph have gone to the homeless shelter to film for Steph's story. During this time, a zombie infection starts spreading and Lisa, Tony, Savage and Chris's grandmother are stranded in the school. Anna and John bond over her post-graduation plans after work.

The next morning, Anna and John leave for the school, completely oblivious to the zombie chaos around them. When they encounter a zombie dressed as a snowman, Anna decapitates him with a seesaw. Figuring it will be too dangerous to go home or to the school, they go to the bowling alley where they meet Steph and Chris, who have taken shelter there. Steph finds out that an army evacuation is coming to the school, so the group plans to go there once it is safe. Anna and Steph find the zombified cleaner and Steph kills her, alerting a group of zombified bowlers to break in. The group kills them all after a bloody fight and realise that getting to their loved ones will be difficult.

The next morning Anna, Steph, John, and Chris wake up to find that the army has been zombified and no evacuation is coming. Regardless, they set off to the school to see if their loved ones are still alive. Nick - who is greatly enjoying the carnage - and his friends rescue the group from a horde of zombies and join them on their way to the school. Anna tells John that she still plans to go travelling despite everything that has happened. At the school, Savage fights to maintain authority as the others plan their own evacuation.

The students cut through a Christmas tree emporium in an attempt to save time but are ambushed by zombies, which kill Nick's friends. Once they escape, John is bitten; he gets Anna to safety but sacrifices himself to distract the zombies. The survivors reach the school, where Savage has let the zombies in as a last-ditch measure of control. Anna and Nick split off to search for Tony while Steph and Chris look for his family and Steph's car keys. Nick reveals that his father asked Nick to kill him after he was bit, before distracting a group of zombies so that Anna can find her father. Chris finds Lisa but his grandmother had already died of a heart attack. Steph, Chris, and Lisa find the car keys in Savage's office but Chris and Lisa are bitten while trying to escape, having used Chris's video footage as a distraction.

Anna finds Savage in the auditorium, where he is using Tony as bait for the zombies. Anna gets to the stage and saves Tony, but he lashes out at Savage and they fight. Savage falls to the zombies but Tony is bitten in the scuffle. Anna says goodbye to her dad as Nick arrives, and the two of them leave the school. They prepare for one last stand before Steph rescues them in her car and Anna finally leaves Little Haven to look for a safe place.

This list does not include unnamed characters, or characters who have been turned to zombies prior to the film.

The crop tops and short shorts that seen in the film were inspired by the costume design in the slasher film Sleepaway Camp (1983).

The film was dedicated to Ryan McHenry, who died two years before the film's release. 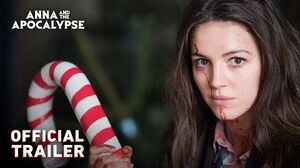 Retrieved from "https://horror.fandom.com/wiki/Anna_and_the_Apocalypse_(2018)?oldid=137691"
Community content is available under CC-BY-SA unless otherwise noted.