This page needs improvement. It can be improved by: cast, external links, pictures, information/trivia, quote

Annabelle: Creation is a 2017 supernatural horror film written by Gary Dauberman and directed by David F. Sandberg. It is a prequel to 2014's Annabelle and the fourth installment in The Conjuring series. It is about the story behind the origin of the possessed Annabelle doll.

The film premiered on June 19, 2017, at the Los Angeles Film Festival and was released theatrically on August 11, 2017 in the United States.

In year 1943, Samuel Mullins, a dollmaker, makes a porcelain doll that is supposed to be a limited edition consisting of just 100 dolls. As he works on the dolls, his daughter Annabelle, or just "Bee", slips a note under the door to his workshop saying "find me". He then goes to the house, finding another note saying "closer". Mr. Mullins notices motion behind the curtains and writes "Found you" on the backside of the note before putting it on the escritoire before sneaking off. Bee gets out of hiding.While returning from church, one of the tyres puncture and they stop to change it. During the attempt, Bee, aged 7, is hit by a passing car and killed.

12 years later, in 1955, the Mullins open up their home to a group of orphan girls from a closed Catholic orphanage. Two of the girls, Janice and best friend Linda, swear that the parents adopting them must choose to adopt both or neither of them, and make a promise.

The girls arrive and they and sister Charlotte are greeted by Mr. Mullins. He tells them that his wife Esther has ended up bedridden. He demonstrates a stairlift he built for Mrs. Mullins when she became physically disabled. Janice, who is partially immobilized after having suffered from polio, is allowed to try the stairlift. After being given a bed to sleep in on the second floor, she goes to Bee's old room, which is locked. Mr. Mullins tells Janice that nobody is allowed to enter that room. One night, Janice wakes up by a noise and finds a note saying "find me!". She then goes to Bee's room, finding the door now unlocked. Before entering, she prays to God for forgiveness for a sin she is about to commit. Inside, she finds a doll's house and discovers the key to the closet. She then open it and finds a doll inside it.

The next day, Janice goes to sister Charlotte to confess her sin of entering Bee's room and tells her about finding a doll in the closet. Charlotte talks to her about it, but eventually tells her that her sins are forgiven and tells her to unpack 3 boxes as an act of penance.

Janice then goes to the room leading into Mullins' room and overhears a conversation between Charlotte and Mrs. Mullins, where Mrs. Mullins tells about Bee's death, but Charlotte tells that Bee is waiting for them in Heaven before Mrs. Mullins replied that she wished it was true. While returning, Janice finds a picture of Bee and the doll she found in the closet the previous night.

During the night, paranormal activities begins to plague the house. The gramophone in Bee's room begins to play while nobody is present there. Janice goes to investigate, and sees Linda in there too, telling her she is not supposed to be there. Linda replies that neither Janice should be there before leaving. She then notice someone inside the room, who looks like Annabelle. When Janice asks Bee if she needs something, she turns around and replies "your soul" and reveals to be a demon who has taken Bee's shape. Janice tries to escape, but while attempting to escape in the stairlift, it stops halfway and Janice is lifted up and then dropped to the floor by the entity.

The injuries Janice sustained makes her completely unable to walk. She tells Charlotte about her encounter with the demonic force and Charlotte replies with that the Devil is feeding on the weak and that Janice is just as strong as the others. She and the others get out, but Janice is confined to a wheelchair. While outside, a demonic entity, taking up Charlotte's form, pushes Janice into the shed before destroying the wheelchair. Unable to escape, the demon succeeds in possessing Janice. This worries Linda, who notices changes in her behavior. Linda then tells Mr. Mullins that Janice did sneak into Bee's room. After that, Janice, who has gained the ability to walk through the demonic possession, then enters the dining room, where she finds Mr. Mullins, transforms into a demon and murders him.

That night Linda sneaks to where Janice is sleeping and takes the doll before heading to a well in the fields surrounding the Mullins' home, in which she plans to toss it into. Charlotte appears and tells Linda to go back to the house. Linda, however, returns to the well and is attempted pulled down by Janice before being saved by Charlotte, who then shuts the well before they both rushes back to the house. Linda tries to tell Janice it is taken away, only to find the doll lying in the couch instead. After telling the other girls to find Janice, Charlotte takes the doll and enters Mrs. Mullins' room and Mrs. Mullins commands Charlotte to keep the doll at distance. Mrs. Mullins tells that after Annabelle's death, they prayed to any powerful entity that would let them see their daughter again. She tells that it began small, with just sounds coming from Bee's room. It then asked to move into the doll so it could stay with them forever. They said yes and Bee's presence became stronger, having a visible shape too. The joy of having life in the house again, however, was short-lived as they realized that the entity was not their daughter, but a demon who were using her shape and sought to claim a soul. One day, the demon attacked Mrs. Mullins, tearing out her right eye while attempting to claim her soul. In order to contain the evil, they wallpapered the closet in Bee's room with pages from the Bible in order to surround the evil with God's word. A priest then sprinkled holy water in the closet, placed the doll inside and then made the sign of the cross in front of the doll before Mr. Mullins shut the door. As a penance, they decided to open up their home for the orphans, but regret it now because it gave the demon an opportunity to claim a soul.

The girls find Janice, having a tea party with the doll, and tells her that it is just them. Janice then holds a knife and tells them it time to cease from sin. Charlotte hears the girl screaming as they run down the stairs and Nancy shows Charlotte that her arm was slashed by Janice. Charlotte orders Carol to get help and the girls to stick together. After calling, they enter the Mullins' bedroom and discovers that Mrs. Mullins has been both crucified and bisected.

Charlotte tells the girls that they will be leaving now as Janice appears. Charlotte retrieves a crucifix necklace and tries to perform an exorcism on Janice, during which Charlotte is lifted from the floor and thrown into a mirror. In horror, they run away from the bedroom. Linda, however, stumbles while trying to escape and is dragged along the floor. As the girls tells Kate to get help, Janice tries to hand Kate her knife telling she can help her. Kate then runs off while Linda hides in an empty room. The remaining girls then gets to Mullins' truck, only to find it not starting. They also see the scarecrow appearing to move.

As Janice tries to enter the room where Linda is hiding, Linda tries to escape through a goods lift. The remaining girls get to the barn. Carol enters, and the other girls notices the scarecrow inside, before the door suddenly shuts by itself, leaving neither of them able to open it. Two light bulbs unscrews itself and falls to the ground as a demon reveals to manipulate the scarecrow. Carol screws the third one back into the lamp, before hearing a bell ringing. Then the hand of a demon breaks the bulb and begins to torment Carol, who escape into the workshop. Linda , hearing Janice trying to enter the room, tries escaping through the goods elevator. She reaches a room in the basement, where she discover the body of a deceased girl. The body, revealing to be Janice, begins moving towards Linda, who escapes through the elevator, but as the demon tries to prevent her escape, Linda is forced to climb the remaining heights of the shaft. She finds the door open and exit, finding Janice having stabbed the face of her doll Sweet Sue, telling her "it looks like her".

Terrified, Linda hides in the closet in Bee's room. Janice eventually finds Linda, who tries to escape, but is restrained and told that those breaking a swear goes straight to hell. Charlotte, having regained counciousness after her failed exorcism attempt, appears while holding the possessed doll. Janice, trying to stab Charlotte, stabs the doll Charlotte is using as a shield before pushing her and the doll into the closet before tipping a glass closet in front of the door. After that, several paranormal activites begin to occur as furniture and toys are thrown around in Bee's room and lights begin flickering as Linda and Charlotte flee the house. They rendezvous with the remaining girls outside as the lightbulbs on the outdoor lighting begins exploding. At distance, police sirens are heard as the sheriff arrives.

The sheriff finds the doll, but that Janice having escaped through a hole. The priest then perform a house blessing and declares that the evil has gone. When the girls ask about the doll, the priest replies that it was a conduit for the evil, but is now just a doll before asking if someone wants it. As none of them do, the sheriff takes it with him. Sister Charlotte, the priest and the girls then leave. Meanwhile, Janice, who is still possessed and has become reclusive, is relocated to an orphanage in Santa Monica. There, couple Pete and Sharon Higgins adopt Janice, who now calls herself Annabelle.

A picture of the Higgins and their newly adopted Annabelle is then shown in a row of pictures showing her in her late childhood, teens and adult age, in year 1967, 12 years after the events at Mullins' estate. A creaking sound is heard in the background and a woman is seen in a mirror image of Annabelle at adult age. Sharon is awaked by the noise. Pete goes to investigate while telling Sharon to call the police. Pete is then slashed by Annabelle, who, along with her boyfriend, is part of a Satanic cult. Annabelle greets Sharon before her boyfriend attacks and kills Sharon: This is being observed by their neighbor Mia Form, who then awakes her husband John, setting the stage of the events of Annabelle.

In a post-credit scene, from the Cârta Monastery in Romania, 1952, Valak, the Demon Nun, is seen walking through a hall lit with candles that goes out as it passes by, before the camera turns black. 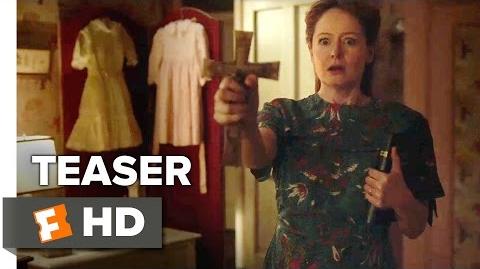 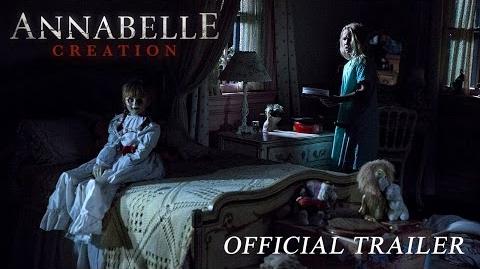 Retrieved from "https://horror.fandom.com/wiki/Annabelle:_Creation_(2017)?oldid=134411"
Community content is available under CC-BY-SA unless otherwise noted.