This page needs improvement. It can be improved by: (more) pictures, information/trivia, quote

Annabelle is an American horror film written by Gary Dauberman and directed by John R. Leonetti and stars Annabelle Wallis and Ward Horton. It is a spin-off/prequel of the 2013 film The Conjuring and was released worldwide on October 10, 2014.

The film starts with the same opening scene from The Conjuring. In 1970, in which two young women and a young man are telling Ed and Lorraine Warren about their experiences with a doll called Annabelle which, they believe, is haunted.

In 1967, John and Mia Form live in Santa Monica and are expecting their first child. John gives her a doll that she has been trying to find. Mia loves it and puts it with the rest of her doll collection. At night, Mia hears a murder occurring at their neighbors', the Higgins. When Mia returns home and calls the police as her husband told her to do, she is attacked by a woman holding the doll and a male accomplice. John and the police arrive and kill the man while the woman kills herself by slitting her own throat. She leaves a bloody symbol drawn on the wall and a drop of her blood falls on the face of the doll in her arms. A news report shows that the assailants were Annabelle Higgins and her unknown boyfriend. They had murdered her parents and are said to have been part of the Disciples of the Ram, a satanic cult, in which they worship a demon with horns.

Since Annabelle was holding the doll while dying, Mia asks John to throw it away. Later, after a fire caused by the doll, Mia trips over furniture escaping from the fire and goes into labor. Mia gives birth to a healthy baby girl named Leah. The family moves into a new apartment, in Pasadena. Mia unpacks her dolls and finds the one which they had thought discarded. More strange activity plagues Mia and her new baby. She contacts the detective, who informs her of Annabelle and her boyfriend's history in a cult that seeks to summon a demon by claiming a soul. Mia goes to a bookstore run by a woman named Evelyn and determines from a book that the presence haunting her wants Leah's soul. Evelyn tells Mia that she had a daughter named Ruby that was around Mia's age when she died in a car accident caused by Evelyn. She was so distraught and guilt-ridden that she attempted suicide. However, she claims to have heard Ruby's voice telling her it wasn't her time.

The couple contacts their church's priest, Father Perez, who tries to take the doll with him to church. Annabelle's ghost attacks him with the horned demon creature worshiped by the satanic cult, and then the doll disappears. Perez warns John that it was indeed Annabelle's spirit that caused his injuries, and that he felt how much the demon wanted Mia's soul. John rushes to warn Mia. During another attack, Annabelle appears to levitate, but Mia sees the demon holding Annabelle in the air, manipulating its actions. Meanwhile, the demonic presence pushes Evelyn out of the apartment and taunts Mia while taking her baby. Mia attempts to kill Annabelle and asks him if there is another way, and it says that she can offer him her soul. John and Evelyn break open the door to find Mia ready to jump out the window with Annabelle in her hands. John saves Mia; Evelyn takes hold of Annabelle and decides to make the sacrifice, knowing this is the way she can atone for Ruby's death. Evelyn then jumps out of the window to her death and is shown at the bottom of the apartment building, dead next to Annabelle. Leah is then found safe and sound in her crib. The camera focuses back to Evelyn's body but this time, the Annabelle doll has disappeared.

The final shot shows the camera linger on the Annabelle doll, as if it were to make a move before the screen cuts to black.

Six months later, the Forms have moved on and have not seen Annabelle since then. Elsewhere, the mother of one of the girls in the opening scene purchases Annabelle as a gift for her child. The ending text states that the real Annabelle doll resides in a case in Ed and Lorraine Warren's museum and that it is blessed by a priest twice a month to keep the public safe from the evil that the doll possesses.

On November 8, 2013, a spin-off film of The Conjuring was announced to feature the Annabelle doll from the original film. 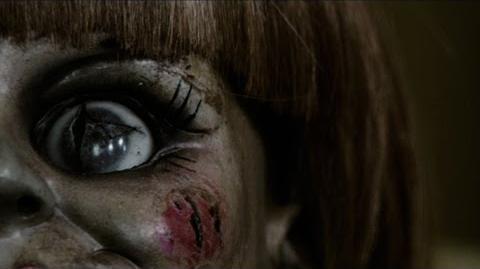 Retrieved from "https://horror.fandom.com/wiki/Annabelle_(2014)?oldid=141609"
Community content is available under CC-BY-SA unless otherwise noted.