April Fool's Day is an American slasher film released in 1986, by Paramount Pictures. It was directed by Fred Walton, from the screenplay by Danilo Bach. The original music score was composed by Charles Bernstein. It was filmed in British Columbia, Canada and has a largely Canadian cast.

A group of college friends: Harvey, Nikki, Rob, Skip, Nan, Kit and Arch, gather to celebrate Spring Break by spending the weekend at the island mansion of their friend, Muffy St. John, on the weekend leading up to April Fools' Day. The tone is set almost immediately with Muffy preparing details around the house, and finds an old jack-in-the-box she remembers (in flashback). Her friends, meanwhile, are joking around on the pier, then on the ferry to the island. But en route to the island, Buck, a local deckhand is seriously injured in a gruesome accident.

Once on the island and in the mansion, it turns out Muffy has set up a ton of little jokes from the simple (whoopee cushions, dribble glasses, etc.) to the more complex and disturbing (an audiotape of a baby crying in someone's room, heroin paraphernalia in a guest's wardrobe, etc.) Through it all, the friends in general try to relax. But then, Skip goes missing. Kit catches a glimpse of what looks like his dead body. Next, Arch and Nan also go missing. During a search, Nikki falls into the island's well and finds the severed heads of Skip and Arch and the dead body of Nan. Afterward, the remaining group discover that the phones are dead, and there is no way to get off the island until Monday.

One after another, people keep vanishing or being killed and their bodies being found. Kit and Rob put together some clues, realizing that everyone's earlier assumption is wrong. The kinsman of the deckhand injured when they arrived is a red herring. Muffy, it turns out, has a violently insane twin sister, Buffy, who has escaped. In fact, the Muffy they have been around since the first night was Buffy pretending to be Muffy. They discover Muffy's severed head in the basement.

Buffy chases them with a butcher's knife, and the couple are separated. Kit flees from Buffy into the living room — where she finds everyone else there, alive and calmly waiting for her. It was all a joke, or more accurately, a dress rehearsal. It is revealed to the audience that the whole movie was never a slasher film from the start, but rather pretending to be one. Muffy hopes to turn the mansion into a resort offering a weekend of staged horror. She even had a friend who does special effects and make-up for Hollywood help. Each "victim" agreed to take part as things were explained to them. Everyone has a huge laugh, and break out lots of bottles of champagne. Later that night, a half-drunk Muffy goes to her room. She finds a wrapped present on her bed. Grinning, she unwraps it. It is the Jack-in-the-Box. Savoring the surprise, she turns the handle slowly. When "Jack" finally pops out, Nan — the shy, bookish girl who knew Muffy from acting class, emerges from behind her and slits her throat with a razor. Muffy screams, but then realizes she is not really bleeding. She "got" her with a trick razor and stage blood.

Jeff Rovin's novelization features the notorious ending in which Skip sneaks back onto the island after everyone has left to kill Muffy for her share of the family money, though he fails and winds up dead himself. This ending has never been released, but stills of it have surfaced.

A revised draft of the script included another version of the above-mentioned ending in which Skip sneaks back onto the island to slay Muffy. He springs out of a closet and slits her throat, and she at first panics but realizes it is all a joke when she sees her friends standing around. The script then states that Skip stays on the island to help Muffy with the bed and breakfast.

For its home video premiere in the 1980s it was released to both videocassette and laserdisc. It has since been released to DVD on three separate occasions. The first edition was made available in September 2002. It was then included as one of the films on a triple feature disc that also included Tales from the Darkside: The Movie and Stephen King's Graveyard Shift in August 2007. Eight months later, in March 2008, it was offered as a double feature with My Bloody Valentine. The double feature disc is the only format in which the film is currently available, and none of the editions have included any special features.

A soundtrack for the film was released in 1986 in on vinyl only. The soundtrack consists of 19 songs and runs approximately 30:27. [2]

A straight-to-DVD remake was released in March 2008. Though it retains the original's concept, the story and characters are radically altered and contemporised. 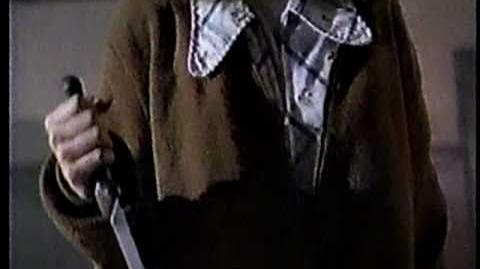 Retrieved from "https://horror.fandom.com/wiki/April_Fool%27s_Day_(1986)?oldid=125327"
Community content is available under CC-BY-SA unless otherwise noted.