As Above, So Below

As Above, So Below is an American found-footage horror film directed by John Erick Dowdle. It was released on August 29, 2014 by Universal Pictures.

The film is about a group of subterranean explorers, who encounter terror beneath the streets of Paris after descending into the city's ancient catacombs. Just when it seems their journey can't get any more nightmarish, the demons of their pasts strike back with a vengeance.

Scarlett Marlowe, a young alchemy scholar, continues her dead father's work searching for the philosopher's stone, a legendary alchemical substance said to be capable of turning base metals such as lead into gold or silver and grant eternal life, discovered by Nicolas Flamel. After finding the Rose Key in a cave in Iran, she travels to Paris. She then enlists the help of George, her former lover whom she abandoned in Turkey while in pursuit of the stone. Along with Benji the cameraman, they translate Flamel's headstone, which contains a riddle that leads them to a point underneath the streets of Paris. She then enlists the help of a guide called Papillon, who was made known to her from a mysterious young man during a tour of the catacombs, his girlfriend Souxie, and friend Zed to search the Catacombs beneath Paris, France. George explicitly refuses to go, but is driven into the caves with the group when they are pursued by a policeman. After crawling through a narrow tunnel which collapses, they find themselves before a door that Papillion is reluctant to breach, as the only people who have gone through, including Pap's friend La Taupe, have never been seen again.

Early on in the venture, they encounter some female Cultists who are singing; the cultists notice the group. After proceeding deeper into the catacombs, they encounter La Taupe, who agrees to guide them out, and informs them that the way out is down. They eventually find a tomb with a preserved Templar Knight, a mound of treasure, and the Flamel Stone. Removing the stone, Scarlett realizes too late that the treasure is a trap, and the room collapses. La Taupe is lost under the rubble and is abandoned by the group.

With the Flamel Stone, Scarlett heals the group's injuries. They find a drawing of a door on the ceiling along with a Gnostic Star of David, symbolizing "As above, so below," meaning there is a door hidden in the floor. Going through the opening, they find a tunnel marked with the phrase "Abandon all hope, ye who enter here" in Greek, identical to the entrance to Hell.

Passing through, they find a dark reflection of the crypt they just left, including La Taupe, who attacks Souxie by smashing her head into the rock floor, killing her. They realize they must continue and go deeper. Along the way, Benji the cameraman is pushed down a hole to death by the female cultist who was seen earlier in Paris as well as while singing in the upper levels of the catacombs. Later they encounter a burning car and occupant (who is the same young man who told Scarlett to find Papillon as a guide), an incident from Papillon's past who pulls in Papillon and then sinks into the floor. Papillon becomes partially submerged in the floor. They attempt to pull Papillon out of the ground, but to no avail. As they continue, they see apparitions of terrifying spirits and demons. Statues in the wall come to life and one attacks George, biting open his throat. After trying to drag him further, George murmurs "Vitriol," another riddle from earlier, and Scarlett realizes the Flamel stone itself is yet another trap, and that only by returning it will she find the real stone. She punches the living statues she encounters on the way in a fit of desperation and anger, she then gets pulled down by pairs of arms into a river of blood but she escapes their grasp just in time. Zed sees a menacing cloaked figure and pulls George to a secure spot elsewhere.

She races back to the crypt, returns the stone and looks into a polished mirror on the wall where the stone was hidden, realizing that her quest for the stone and belief in the philosophy "As above, so below," (explained as simply willing acts of magic to happen makes it so) has granted her the magical abilities of the stone. She returns to George, kissing him as she holds his wounds, healing them. She then explains that where they are is about confronting their regrets and rectifying their respective pasts, such as George's brother who drowned after he got lost looking for help and her father who committed suicide, as he had called her that night but she refused to pick up the phone. She says they must accept their guilt in order to absolve themselves and escape. Zed confesses he has a son who he never took responsibility for and denied as his own, explaining the vision of a little boy that plagued him during their journey. With the cloaked figures (supposedly demons) closing in, the three accept what they have done before a hole they have discovered. Together they jump down, even though they know there is no logical way for them to survive. As they land at the bottom, they look up, see the hole they came down is no longer there. They find a manhole, force it downward (gravity is somehow altered during this process), and come out onto a street in Paris. The remaining three embrace and Zed walks into the city. 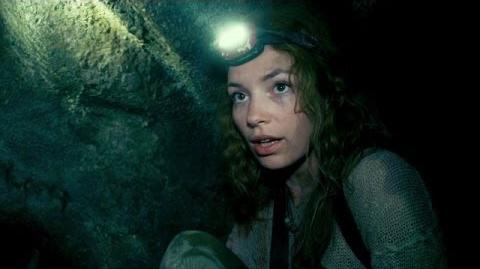 As Above, So Below - Trailer

Retrieved from "https://horror.fandom.com/wiki/As_Above,_So_Below_(2014)?oldid=123792"
Community content is available under CC-BY-SA unless otherwise noted.