At the Devil's Door

At the Devil's Door (originally titled Home) is a 2014 American horror film written and directed by Nicholas McCarthy. The film is about a real estate agent who finds herself pulled into something sinister and supernatural when she is asked to sell a house with a dark past.

Leigh is trying to sell the home of Chuck and Royanna. While going over the various details of the couple's property, Leigh mentions that she saw a young girl inside their home. The couple assume that Leigh saw their missing daughter, Charlene, who ran away with her boyfriend several months earlier.

When Leigh goes back to the couple's house she finds "Charlene." Leigh calls Chuck to let him know that she found Charlene; however, Chuck tells Leigh that police found his daughter at a local mall hours ago. Puzzled, Leigh looks at the files from the couple's home and finds an article with "Charlene's" picture in. Leigh realizes that the girl she had seen was actually Hannah White, a girl who had committed suicide in 1987. Leigh notices Hannah is missing and tries to look for her in the house. She finds Hannah in an empty room staring into a mirror. When Leigh tries to speak with Hannah, she is attacked by some unseen force, falls to the floor, and dies.

The coroner tells Leigh's sister Vera that she died of natural causes. Later in Leigh's home, Vera finds Leigh's files from the couple's house and visits Hannah's old childhood friend. Hannah's friend reveals that Hannah had been pregnant before she died. Many people believed that Hannah had committed suicide because of her pregnancy. However, Hannah's friend insists that Hannah had been a virgin, and that she may have killed herself to stop her supernatural child from being born. Since Hannah had killed herself, the demon that had tried to possess her child instead took over her body until it could find another vessel.

Vera returns to her home, where she is assaulted by a demonic force that throws her through a window to fall two stories. Vera wakes up in a hospital; she has been in a coma for eight months. The doctor tells her she was pregnant when it happened. During her ultrasound, Vera sees a demonic face on the monitor and demands an immediate C-section.

Six years later, Vera visits her daughter, who has been adopted by another woman. Vera tells the girl that she knows who the little girl really is and demands to know why she was chosen. The girl flees. Vera chases her to an abandoned house in the woods and attempts to kill her. Unable to do so, Vera leaves, taking her daughter with her. 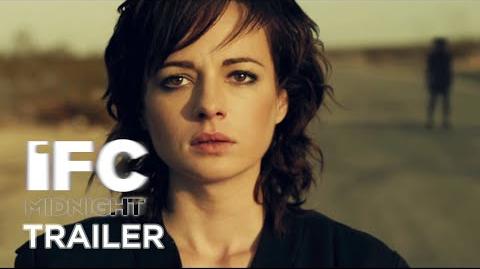 Retrieved from "https://horror.fandom.com/wiki/At_the_Devil%27s_Door_(2014)?oldid=123799"
Community content is available under CC-BY-SA unless otherwise noted.