Australia, officially known as the Commonwealth of Australia, is a sovereign country in the Southern Hemisphere comprising the continental mainland (the world's smallest), the island of Tasmania, and numerous smaller islands in the Indian and Pacific Oceans.

60,000 years prior to the first British settlement in 1788, Australia was a land occupied by Indigenous Australians.

Australia is the fifty-third most populous country by population and the sixth largest by area, with over 24 million inhabitants and at 7.6 million square kilometers.

The word Australia comes from the term Terra Australis (which is Latin for "southern island").

Several Indigenous Australian (or Aboriginal Australian) tribes migrated to the land. Some people believe that these tribes migrated from the Indian subcontinent via land bridge. By modern estimates, the Indigenous Australian population was between 300,000 and 700,000. They have an oral culture with spiritual values based on reverence for a land and a belief in the Dreamtime. In 1644, the Dutch named the island "New Holland" after the Holland province in the Netherlands. However, they didn't trie at settlement.

On May 13, 1787, the British fleet known as the "First Fleet" commanded by Arthur Phillip were sent to create a new penal colony in the state of New South Wales. On January 26, 1788 (the same date which became Australia Day, the country's national day), they landed on Sidney Cove, Port Jackson. In the 1800s, new colonies started springing up all over Australia such as Melbourne.

Australia has had little influence in the American horror market, though there are several independent films that have been filmed and/or produced in Australia. One of the more noteworthy movies that has come out of Australia is the 2005 psycho-thriller Wolf Creek which details the fate of three backpackers and their encounter with a bloodthirsty murderer in the Australian outback. A lesser known film, The Howling III: The Marsupials, explored the idea of marsupial werewolves who were desccended from the now extinct Tasmanian tiger. 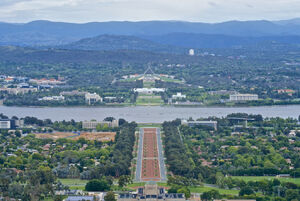 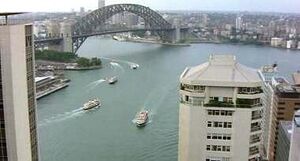 Sidney, Australia's largest city.
Add a photo to this gallery

Retrieved from "https://horror.fandom.com/wiki/Australia?oldid=134836"
Community content is available under CC-BY-SA unless otherwise noted.