Bait is a 2012 Australian-Singaporean 3D horror film. It was directed by Kimble Rendall based on the screenplay by John Kim and Russell Mulcahy. It featured Sharni Vinson, Phoebe Tonkin, Xavier Samuel, Julian McMahon, Cariba Heine and Alex Russell.

A group of people get trapped in a supermarket after a tsunami hits the coast of Queensland, Australia. But they soon find out that they have more to worry about than being in a flooded grocery store - there are 12 foot sharks swimming around them, and they're hungry.

The film opens with a hungover Josh being woken up by Rory. Rory tells Josh that he shouldn't have proposed to his sister, Tina. Rory says Tina is at the beach, and that she has something for him. Josh sees Tina and she shows him a seahorse. Meanwhile, an old man is swimming out in the ocean and Rory, a lifeguard, is also out on the water. Another lifeguard on the watch tower sees the old man being eaten by a shark, but is unable to alert Rory. Josh quickly takes a jet ski and goes to get him; but before he can explain, a shark bursts through Rory's board and sends him flying into the water. Josh struggles to get Rory up onto the jet ski but the shark pulls him under and he is devoured.

A year later, Josh walks to the supermarket where he now works. As he gets there, 2 people in a car - Doyle and Kirby - are discussing a robbery. They drive into the car park where Kyle and Heather are parked for a make-out session, with Heather's dog, Bully, sitting in the back seat. Meanwhile, in the supermarket, Jaime begins to shoplift and is subsequently chased by a security guard. She hides in the delivery room where she meets her boyfriend Ryan. Ryan's boss Jessup walks in with the security guard and tells Jaime he has called the police. He also fires Ryan.

On the floor, Josh is stocking shelves with Naomi when he sees Tina with her new best friend Steven. Just as he's about to engage in a conversation with her, Jessup steps up and tells Josh to go clean himself up. Meanwhile, a police officer, Todd, arrives, and is revealed to be Jaime's dad.

Doyle and Kirby make an agreement about what happens after the robbery, and proceed into the supermarket. Doyle forces Jessup to open a safe, but it is empty. He then asks where the money is as they walk towards the cash registers. There, Todd stops him, but Kirby holds a gun to assistant manager Julie's head.

Outside, Ryan walks over to Todd's car that Jaime is in and lets her out. While Jaime goes back into the supermarket to get her boyfriend his job back, Ryan walks back to his van to leave, but a flat battery keeps him from leaving.

Back in the supermarket, Josh hears a gunshot and runs through to the others. Kirby has shot Julie and is now holding Tina at gunpoint. Suddenly, a tsunami wave floods the supermarket, trapping Kyle, Heather and Ryan in the car park. The only survivors inside the supermarket are Tina, Josh, Doyle, Kyle, Heather, Steven, Jaime, Jessup, Kirby, Todd, Naomi and Neil. As they try to find a way out of the supermarket, Neil is killed by a 12 foot great white shark. Meanwhile, a second great white approaches Kyle and Heather, who are trapped in their car. A wire in the supermarket starts to spark so Steven turns off the electricity, but drowns after his success. The shark in the car park smashes Kyle's window, filling his car with water. Ryan, standing on top of wreckage, cuts off a dead woman's hand and puts it in the water, distracting the shark. Kyle and Heather swim to Ryan's van, but Kyle lets the dog go in order to save himself at the last minute.

The survivors in the store try to escape through a vent, but Jessup is bitten in half by the shark, attracted by crabs falling from the vent. Kirby gets knocked into the water, prompting Doyle to feed Jess's other half to the shark in order to save Kirby. Back in the car park, Ryan attempts to get back to his van using the pipes, but he falls in. Kyle saves him, but is knocked into the water and killed. Inside the supermarket, the remaining group make a plan to catch their shark. The plan fails due to the lack of live bait, so Kirby grabs a hook and puts it through Naomi's shirt, using her as bait. Before the shark can attack, Doyle stabs Kirby and saves Naomi, making Kirby the bait. With live bait, the survivors catch the shark successfully.

As the group in the supermarket make their way out and find Bully alive, Jaime hears Ryan banging on the pipes. She and Josh go to rescue Ryan and Heather from the car park, but are chased by the second shark to Todd's car. Josh grabs Tod's tazer and shotgun, jumps into the water and kills the shark with the shotgun. The four of them get back into the supermarket and are moving to the exit when a tremor strikes, breaking the first shark loose. Josh realizes he still has the taser, and uses it to kill the shark. Ryan, Josh, Todd, Jaime, Tina, Heather, Bully, Doyle and Naomi leave the supermarket, reaching the severely damage street. As the camera pans away from the characters and shows the devastation, it follows a seagull as it flies into view and out to sea, whereupon a shark jumps out of the water and swallows it.

The film received mixed-negative reception, with Rotten Tomatoes reporting a 42% "Rotten" rating from 26 reviews. Margaret Pomeranz acclaimed the film, saying it would appeal to a specific genre audience, while David Stratton dismissed the film for not investing the audience in its characters. Others, such as Jake Wilson of The Age, saw it as a film that is somewhat enjoyable on the basis of being an "awful" film.[1]

Despite only earning approximately $775,000 in its home country of Australia, Bait 3D was a sizable success overseas, making over $20 million China alone. It also made $2 Million in Italy. As a result of its international success, Arclight Films announced that the film will receive a sequel.

But in May it was announced that Bait 2 3D was now becoming Deep Water and the story is completely different.

"It’s just a routine flight, one that is carrying the world’s most vicious merchant of death and an assassin who will stop at nothing to ensure his target is eliminated. Routine, until the plane goes down in the middle of the ocean. As the downed aircraft takes on water with every passing second, the surviving passengers and crew must face terror beyond reckoning. Their plane is on the brink of toppling into a bottomless abyss. Not only will the killers stop at nothing to secure their personal survival, the rapidly disintegrating airplane has been infiltrated... by the deadliest natural born killers on earth." 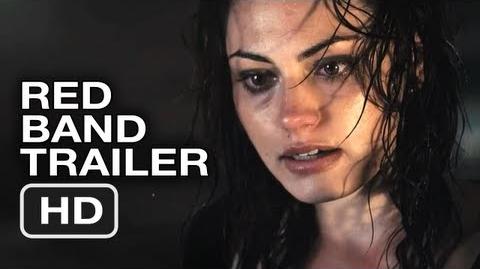 Retrieved from "https://horror.fandom.com/wiki/Bait_(2012)?oldid=128094"
Community content is available under CC-BY-SA unless otherwise noted.