Bikini Bloodbath is an American independent horror film directed by Jon Gorman and Tom Seymour and produced by Blood Bath Pictures. Filmed in Connecticut in 2005, the film was released direct-to-video in 2006. Bikini Bloodbath mixes modernist comedy with the serial slasher subgenre.

Jenny is a teenage girl and a senior at Hale Manor High School. She awakens on the morning of her last day before summer vacation, showers, kisses the White Liger poster in her living room and goes off to school.

During Gym class, Jenny meets with her friends Pam, Sharon, Ginger, Eve, Tawny and Portia. Under the tutelage of their overtly lesbian gym coach, Miss Johnson, Jenny and Pam picks team members for volleyball. The one player who is not chosen for a team is a girl named Suzy, whom the others refer to by the unflattering nickname, "Smelly Suzy". After class, the girls hit the showers and Miss Johnson lasciviously surveys them, complimenting their various body parts. Jenny decides that she wants to hold a girls-only slumber party and invites many of the other volleyball players to come over to her house. Naturally, Smelly Suzy is not invited and the girls illustrate their dislike for her, by throwing a bloody tampon in her direction. Leaving the gymnasium, the girls have a brief encounter with a group of football players. The jocks learn about Jenny’s girls-only party and decide to host a guys-only party of their own.

After school, one of the girls, identified later as Eve Kendall, is walking near a cemetery. A psychopathic chef, dressed in full uniform, emerges from behind a gravestone and stabs Eve in the gut with a meat cleaver.

A short time later, a strange homeless man accosts one of the other girls, Ginger. He tells her that he just got out of prison for statutory and Ginger frantically begins throwing loose change at him. The man scrambles on the ground for the change while repeatedly muttering “Cheeseburger!” to himself. After Ginger leaves the scene, the Chef appears and murders the homeless man.

To prepare for their slumber party, Jenny and her friend Pam go to the grocery store. While buying food and decorations for the party, they run into "Smelly Suzy". Pam reminds her that she's not invited to Jenny's party and shoves her into a display stack of grocery items. After purchasing their items, the girls return to Jenny's place.

Meanwhile, gym coach Miss Johnson returns to her home and telephones Jenny. Jenny isn't home yet, so Miss Johnson records a message for her on her answering machine. She reminds them that she is always available should Jenny ever need help, and tries to get herself invited to the party. The murderous Chef sneaks into her bedroom and stabs Miss Johnson in the stomach. She against a stack of flamingo lawn ornaments and the Chef makes his escape. Before dying, Miss Johnson holds a dolphin snow-globe and remarks about how much she likes fish. Her last word is "Beaver".

Back at the party house, Jenny receives an unexpected visit from her neighbor, Mister Robinson. Robinson is dressed in a chef’s uniform as well and is covered from head to toe with a red, sticky substance. He then reveals that he was in the middle of making a peanut butter and jelly sandwich when he decided to come over. He tells Jenny and Pam that they are all "sticky" and that they should shower together. The girls are put off by Robinson's comments and close the door. Within short order, the other girls arrive and they begin decorating the house.

As day turns to night, Hale Manor's football team hold their own party. With the exception of two players named Phil and Mike, the rest of the team, including their coach are all homosexuals. Coach is seen grabbing one of his student's rear ends, then sniffs his fingers. Another football player is perpetually seen with an unidentifiable brown paste smeared across his mouth and nose. The jocks engage in various games, all of which have a heavy homosexual element to them, and they even dance to a re-imagined version of the song Footloose. Eventually, Mike and Phil tire of the constant innuendo and decide to leave. They go off to crash Jenny's slumber party.

Meanwhile, Suzy is at home and realizes that she has run out of her favorite candy. In her underwear, she walks over to her neighbor, Mister Robinson, to ask him if he has any. After searching through the man's residence, she soon discovers that Robinson is dead and his body has been hacked to pieces. Suzy begins frantically screaming and runs off into the night.

At the slumber party, Jenny and the others continue having a good time, and they soon move the party from the house to a Jacuzzi in the back yard. Mike and Phil arrive and get inside the Jacuzzi. Phil then goes off to make drinks while Mike amuses himself watching two of the other girls who begin kissing one another.

Time wears on, and Pam gets out of the Jacuzzi to go meet her boyfriend, Brad. Brad is parked right out front and she gets into his car and begins to perform sexual favors for him. At this point, the killer Chef emerges and slices Brad's throat open. He then kills Pam.

The other girls come outside to see what Pam is doing. When they discover the teens' bloody remains on the front seat of the car, they race back inside. They try to telephone the police, but none of them can seem to get their cell phones to work. Suzy bursts into the front door and tells them that Mister Robinson is dead. They care less about Robinson's apparent demise and are more concerned with the fact that Suzy showed up at their party. After all, she wasn’t even invited.

One of the partiers, Sharon, decides that she will go out to find help. She wants to stop for food anyway at a place called Dos Tacos. As she exits the front door, she runs into Mike. Surprised, she accidentally stabs him with a knife, and kills him. Rather than report the accident to her friends however, Sharon continues on her way to Dos Tacos.

Inside the house, one of the partiers, Portia, goes to use the bathroom. The Chef emerges once again and kills Portia while she is sitting on the toilet. Phil discovers Portia’s body soon after. Phil races into the other room to tell the others, but the Chef sneaks up behind him and runs him through. Looking at the blood running down his blades, he smiles and says, "Au jus! Tres bien". Seeing Phil fall over dead, the other girls panic and try to get away. The Chef catches up to one of them and finishes her off. The others manage to flee through an upstairs window.

Jenny and Suzy run into the garage. The Chef chases them and they have their final showdown. Suzy arms herself with a circular saw and charges him, but when she runs out of cord, she falls over and the saw imbeds itself into her chest, killing her. The Chef produces two meat cleavers and charges at Jenny. Jenny picks up a garden rake and the two swap blows with one another. Jenny ultimately wins the battle and strike the Chef with the pointed end of the rake until he is dead. 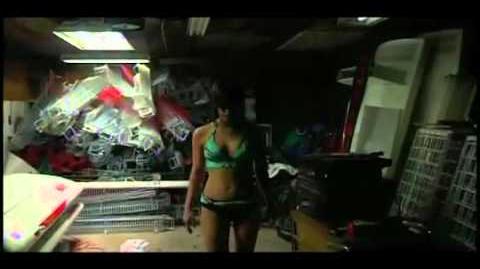 Retrieved from "https://horror.fandom.com/wiki/Bikini_Bloodbath_(2006)?oldid=124607"
Community content is available under CC-BY-SA unless otherwise noted.