Bikini Bloodbath Car Wash is an American independent horror film directed by Jon Gorman and Tom Seymour and produced by Blood Bath Pictures. A sequel to the 2006 film Bikini Bloodbath, the movie was released direct-to-video in 2008.

The film draws upon many of the same sight gags from the previous film and also recasts many of the same actors, albeit in different roles. B-movie starlet Debbie Rochon reprises her role as the acerbic Miss Johnson, a character who was believed to be killed in the first movie.

Jenny and her roommate Sharon awaken in the morning and get ready to start their day by lip-syncing to a White Liger song called Cannon Load playing on the radio. They then attend their college classes where they have a run-in with the opportunistic Professor Zartan. Zartan suggests that Jenny should come over to his place for some private tutoring. They then have class with Professor Shipwreck who reminds Sharon that her grades are slipping, but more importantly, that she's getting fat. Following class, Shipwreck meets with a strange masked man known as the Community College Commander. After the meeting, Shipwreck walks into the hall only to meet one of the students, Todd, who throws a basketball into his crotch. Todd and his friends, which includes two foreign exchange students, flirt with Jenny and her friends. They make arrangements to meet at their boss Miss Johnson’s party on Friday night.

The girls meet up with some more friends and they all go to work at Miss Johnson's Bikini Wax and Wash Car Wash. Miss Johnson, formerly a high school gym coach, is just as merciless at her new career as she was at her past one. She emphasizes the need for her workers to use their breasts and buttocks to earn her money. The begin reeling in clients and get to work cleaning their vehicles while also dancing provocatively with one another to hard rock music. One of their customers is Professor Zartan who orders a "wash and a bikini wax". After he’s done, he dirties his vehicle, just so he has a reason to return.

Soon after, Todd and his friends show up and attempt to impress the car washers with their break dancing skills. Their routine ends however with the sudden appearance of a girl named Lucy. Lucy claims that she has just gotten out of "juvie" and is looking for a job. Miss Johnson doesn't think that Lucy has what it takes to run with her girls and the two engage in a fight patterned after Michael Jackson's music video for "Beat It".

Later, the girls retire to their dorm where they hold a séance in an effort to communicate with the spirit of their late friend, Portia (who was killed by Chef Death in the first film). They accidentally invoke the spirit of the Chef himself, causing him to rise from his own grave.

The following day at school, the girls attend Professor Shipwreck’s class, and the Professor gives a lesson on how babies are made. After class, they meet with some of the guys outside and ask about who will be attending Miss Johnson’s party.

Two of the girls, Scarlet and Lady Jaye, begin walking home and run into Chef Death who kills both of them with a blow to the head from a meat cleaver. He then gets a hold of a girl named Sam at the Bikini Car Wash and eviscerates her.

That evening, Miss Johnson hosts her party. She has purchased the home that Jenny once lived at and was the scene of Chef Death's first massacre. Most of the girls in her employee show up, except of course for Scarlet and Lady Jaye.

Another of Miss Johnson's employees, Peaches, stops at Doctor Zartan's house on her way to the party. Zartan invites her into his bedroom where he then gags her and locks her inside of a closet. His plans for Peaches are never revealed however, because Chef Death enters the room and kills him by stabbing him in the throat with a skewer. He then slices off his left nipple and adheres it to the bound Peaches' forehead.

Back at the party, several more guests arrive including Todd, Gary and two German exchange students. Gary and Jenny do not like one another, mostly because they are both vying for the affections of the same guy – Todd. Some of the guests begin playing a drinking game in the kitchen, while Jenny and Todd go out to the hot tub.

Chef Death sneaks into the house and murders one of the German exchange students in the bedroom. He slices his throat open with a meat cleaver, then shoves him into a closet.

Miss Johnson and Lucy are in the kitchen comparing scars. Miss Johnson shows her a chest scar that she acquired from her first encounter with Chef Death. She reveals that it took six surgeons and seventy-two stitches to put her back together.

Gary comes out to the hot tub and interrupts Todd and Jenny. They begin to grow uncomfortable with his presence and soon leave. With no one else to watch over him, Gary becomes Chef Death's next victim. The chef turns up the heat in the hot tub, then attacks Gary, pushing him down into the water until he drowns. The water begins boiling and the Chef prepares him for stew.

He then creeps back into the house and kills a guest named Mercedes on the toilet.

Jenny and Todd go into the bedroom close to play "Seven Minutes in Heaven", not realizing that the German exchange student’s corpse is still lying inside. Todd, mistaking the corpse for Jenny, begins making out with the student's gashing throat wound. Sharon interrupts them and they realize that there is a killer in the house. Sharon decides to leave for Luftwaffle Haus.

The other German exchange student attempts to play the same game with Lonnie, but upon entering the closet, they soon discover that this is where Chef Death has been hiding.

The others regroup in the kitchen and now everyone knows that a killer is on the loose. Militant Miss Johnson leads the way and they begin scoping out the area. They first go out to the hot tub where they find the drowned Gary. They all then gather together weapons to defend themselves. Todd defends himself with a balloon.

While searching the house, they come upon Professor Shipwreck who apparently had been hiding in one of the closets for several hours. They then find Mercedes dead on the toilet and Chef Death leaps out and stabs Professor Shipwreck in the eye. He chases them downstairs and manages to catch up to Lucy whereupon he slices her throat open.

Miss Johnson, Jenny and Todd make it outside. Chef Death chases after them and Miss Johnson decides to take him on one on one. She stabs him in the lower abdomen with a pair of salad tongs, but Chef Death eviscerates her, pulling her entrails out and throwing them against the side of the house. Jenny then decapitates Chef Death with one solid swing from a baseball bat. 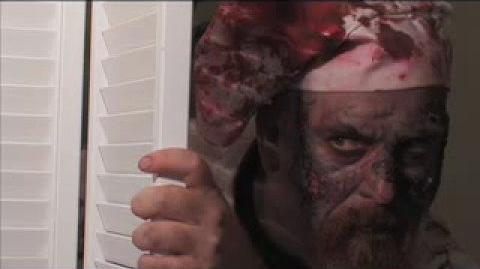 Retrieved from "https://horror.fandom.com/wiki/Bikini_Bloodbath_Car_Wash_(2008)?oldid=124613"
Community content is available under CC-BY-SA unless otherwise noted.