This page needs improvement. It can be improved by: pictures, information, quote

This page is about the original film. For the remake, see Black Christmas (2006).

The story follows college students who must face a deranged serial killer lurking in their sorority house. It was inspired by the urban legend of "The Babysitter and the Man Upstairs", but was also largely based on a series of murders that took place in Quebec, Canada around Christmas time.

An unseen and disoriented man climbs up into the attic of a sorority house, where the tenants are celebrating with a Christmas party. One of the girls, Jess, answers an obscene phone call from a mentally unstable man who is implied to call the house regularly. She summons her fellow students into the room, where they listen as the caller screams and curses them on the phone. When one of the girls, foul-mouthed Barb, takes the phone from Jess, she incites the caller, who in turn promises to kill her. Barb argues with a younger student, Clare Harrison, who implies that the caller could be a serial rapist, before Clare returns to her bedroom to finish packing for Christmas break. The disoriented man lures Clare into her closet, where he suffocates her with a plastic dress bag. He moves her body to the attic.

The following morning, Mr. Harrison arrives at the school to pick up his daughter, but she fails to show up to their agreed meeting place. He quickly makes his way to the sorority house, where the housemother, Mrs. MacHenry, is surprised by Clare's absence. Meanwhile, Jess meets her boyfriend, Peter, a neurotic music student. She explains she is pregnant and planning to get an abortion, angering Peter, who attempts to intimidate her. In town, Mr. Harrison, accompanied by Barb and one of the other girls, Phyllis Carlson, attempt to report Clare as missing, while Jess quickly tells Clare's boyfriend Chris about Clare's sudden disappearance. They learn that another local girl named Janis Quaife has also seemingly vanished while walking home from school.

After putting a drunken Barb to bed, Mr. Harrison, Chris, Jess, and Phyllis help search for Janis in a nearby park where she allegedly disappeared, hoping to turn up some sign of Clare. Meanwhile, Mrs. Mac plans to leave for her sister's home, only to be lured up into the attic, where she discovers Clare's body. The killer throws a crane hook into her face, hanging and killing her. In the park, Janis's disfigured body is found by the police and Jess returns home, while the search continues for Clare. She answers another obscene phone call and decides to file a report with the police, only for Peter to appear and surprise her. He attempts to persuade her into marriage for the sake of their child, but Jess adamantly refuses. Peter leaves in an emotional state, while Lieutenant Kenneth Fuller arrives to bug the telephone.

A group of choir children arrive on the house's stoop to sing Christmas carols, distracting Jess. The killer enters Barb's room and murders her with a glass figurine; Barb's cries for help are drowned out by the singing children. One of the women in charge of the children ushers them away, having learned of Janis's murder. Jess experiences another unnerving phone call, in which the caller restates part of her argument with Peter. Lieutenant Fuller theorizes that Peter could be responsible, due to the caller's knowledge of the argument and his own mental fragility, but Jess doubts this. Moments later, Phyllis enters Barb's room and is ambushed by the killer, who murders her off-screen.

Jess gets another obscene phone call, in which the killer alludes to some sort of transgression between two children named Agnes and Billy. The call is long enough to be traced by Graham, a telephone company employee, and Sergeant Nash instructs Jess to leave the house immediately. Concerned for Barb and Phyllis, Jess arms herself with a poker and ventures upstairs, where she discovers Barb and Phyllis's maimed figures. The killer appears and pursues Jess through the house; Jess locks herself in the cellar, only for Peter to appear outside one of the windows. He smashes the window to get to Jess, who proceeds to bludgeon him with the poker, assuming he is the killer.

The police arrive moments later, alerted by Jess's screams. They discover her barely conscious in the basement, with Peter's bloody remains next to her. They put Jess to bed and discuss the murders, unaware of Clare and Mrs. MacHenry's bodies still in the attic. Jess is left in the house to rest, with a policeman standing outside. The killer climbs down from the attic as Jess sleeps in a nearby room. The house's telephone begins to ring, leaving Jess's fate unknown as the credits roll. 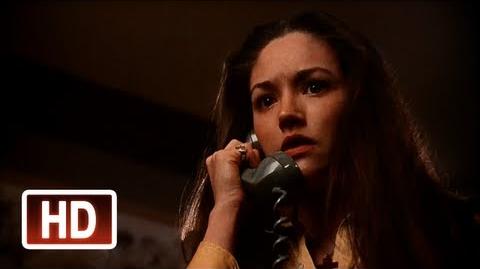 Retrieved from "https://horror.fandom.com/wiki/Black_Christmas_(1974)?oldid=131950"
Community content is available under CC-BY-SA unless otherwise noted.