This page needs improvement. It can be improved by: pictures, information, quote

This page is about the remake. For the original film, see Black Christmas (1974).

The film takes place several days before Christmas, and tells the story of a group of sorority sisters who are stalked and murdered by one of their house's former inhabitants during a winter storm.

William Edward "Billy" Lenz, a boy born with severe jaundice, is constantly abused by his hateful mother, Constance Lenz. With the help of her lover, Constance murders Billy's father, Frank "Franklin" Lenz, on Christmas Eve 1975 and buries his body in the house's crawlspace. To prevent Billy from talking, she imprisons him in the attic. Years later, Constance attempts to conceive another child, but realizes that her boyfriend is impotent. She goes to the attic and rapes twelve-year-old Billy. Nine months later, Constance gives birth to their daughter, Agnes.

Constance uses the occasion of Agnes' birth to further reject Billy, and her boyfriend believes he fathered Agnes. On Christmas Day 1991, Billy escapes from the attic and disfigures eight-year-old Agnes by gouging out her eye. He then brutally murders his mother and her lover. He is caught by police eating cookies made out of his mother's flesh, and is sent to a mental asylum.

Fifteen years later, on Christmas Eve, Billy, now 35, escapes from his cell and heads to his former home, now a sorority house for Delta Alpha Kappa at Clemson University outside Boston. At the house, Clair Crosby, one of the sorority girls, is murdered in her bedroom by an unknown figure. Meanwhile, Megan Helms begins to hear noises and goes up to the attic to investigate. Upon finding Clair's body in a rocking chair, Megan is attacked and killed by the same assailant. In the living room, the other sorority sisters, Kelli Presley, Melissa Kitt, Heather Fitzgerald, Dana Mathis and Lauren Hannon, along with their housemother Mrs. Mac, receive a threatening call from a stranger.

Clair's half-sister Leigh Colvin soon arrives, searching for her. The withdrawn Eve Agnew presents Heather with a glass unicorn before leaving the sorority house to go home for the holidays. Meanwhile, Kelli's boyfriend, Kyle Autry, arrives but is kicked out when Kelli discovers a video of he and Megan having sex. When the lights suddenly go out, Dana goes to check the power under the house, but encounters the figure in the crawlspace and is dragged underneath and killed with a garden fork. The girls in the house subsequently receive an indecipherable call from Dana's cell phone. Outside while searching for Dana, they find Eve's severed head in her car.

With the police are unable to arrive in time due to a snow storm, Kelli, Melissa and Leigh decide to stay inside the house whilst Heather and Mrs. Mac flee. In the car, Heather is murdered, and Mrs. Mac is impaled by a falling icicle. While Kelli and Leigh descend to the garage to investigate, Melissa is attacked and killed by an assailant with a pair of ice skates. Kelli and Leigh return upstairs and find Lauren's eyeless corpse in bed. Kyle returns to the house, and the three go to investigate the attic; while ascending the ladder, Kyle is dragged into the attic and stabbed to death. The killer is revealed to be Agnes, now an adult; Kelli and Leigh watch in horror as Billy appears in the attic as well. Agnes, along with Billy, attacks Kelli, knocking three of them into the empty space between the walls of the house.

Kelli and Leigh manage to escape before starting a fire, and leave Billy and Agnes to burn to death. Later, Kelli and Leigh recover at the hospital. Billy, who is partially burned, kills the morgue assistant. While Kelli goes for an x-ray, Agnes (also survived from being burned to death) appears in her hospital room and kills Leigh. When Kelli returns to her room, Agnes appears through the ceiling and attacks her, but Kelli uses a defibrillator to kill Agnes. Moments later, Billy enters through the ceiling and chases Kelli to the stairwell. They briefly fight, ending with Kelli pushing Billy off the railing where he is subsequently impaled on the tip of a Christmas tree, killing him. 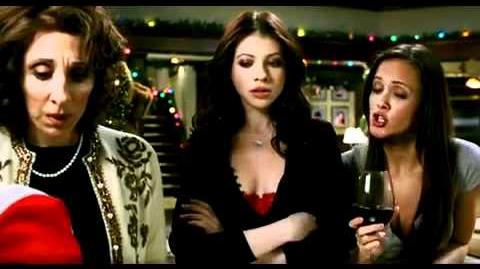 Retrieved from "https://horror.fandom.com/wiki/Black_Christmas_(2006)?oldid=133815"
Community content is available under CC-BY-SA unless otherwise noted.