This page needs improvement. It can be improved by: list of deaths, quote, information

Black Sheep is a 2007 New Zealand made comedy horror film written and directed by Jonathan King. North American distribution rights were acquired by The Weinstein Company and IFC Films.

The Weinstein Company released the film on DVD on 9 October 2007 under their Dimension Extreme brand through Genius Products. In the United Kingdom, the film was released on 31 March 2008.

A young Henry Oldfield lives on a sheep farm in New Zealand, with his father and older brother, Angus. After witnessing his father's pride in Henry's natural ability at farming, plays a cruel prank on him involving the bloody corpse of his pet sheep, just moments before Mrs. Mac, the farm's housekeeper, comes to tell the boys that their father has been killed in an accident. The combined shock of these two incidents leads Henry to develop a crippling phobia of sheep.

Fifteen years later, Henry returns home to sell his share of the family farm to Angus. Unknown to Henry, Angus is carrying out secret genetic experiments that transform sheep from docile vegetarians into ferocious carnivores whose bite can transform a human into a bloodthirsty half-sheep monstrosity. While trying to expose Angus's experiments, a pair of environmental activists named Grant and Experience steal a mutant lamb (meant for disposal) preserved in a container, but accidentally release it when Grant slips and drops the container, causing it to smash open. As Grant and Experience flee from the scientists, the lamb bites Grant and infects him. The lamb then escapes into the fields and infects the flocks of sheep.

Meanwhile, Henry and old friend, Tucker, the farm manager, decide to take a drive on the farm. Tucker sees a sheep that refuses to run away. At the same time, Experience steals a rifle from the car to try to shoot them. They eventually team up with each other to investigate a farm house that has smoke pouring out of it. Inside they find the mutilated body of a farmer. Henry sees a sheep in the hallway and, because of his phobia, he quietly shuts the door and locks it. The sheep tries to crash through the door. Tucker shoots the sheep. On the other end of the farm, Angus is driving around when he sees Grant. Grant bites Angus on the hand and runs off.

Back in the car, Tucker, Experience, and Henry leave to warn Angus about the killer sheep, but a sheep hiding in the car bites Tucker. Tucker, Experience, and Henry manage to escape the car, with the sheep still inside, moments before it drives down the same cliff where Angus and Henry's father fell to his death. After the car is destroyed, they seek refuge in the laboratory, encountering a sheep hung up with its underside open, alive. Henry and Tucker finally realize that Angus is conducting cruel experiments. When one of the scientists see that Tucker's foot has now become a sheep's foot, she keeps him there for study but Experience and Henry escape when Angus cannot bring himself to shoot his own brother.

Suddenly, hordes of sheep come running down the hill. They see an offal pit surrounded by a gate. Henry accidentally slips into the pit, and his brother refuses to help. Henry and Experience fall into the pit but escape in the underground tunnels. Meanwhile, Tucker transforms into a sheep, but the scientist administers an injection of amniotic fluid from one of the mutant lambs' containers which transforms him back to human. But when she goes to give the shot to Angus, she is attacked and eaten by the sheep. While Henry and Experience clean themselves, they hear shearing sounds inside a barn. When they investigate the noise, they see something using shears on itself. The thing stands up and walks up to them wearing Grant's clothes, looking like a bipedal sheep with blood dripping from its mouth. Experience recognises the clothes, but Henry attacks him. Grant hits Henry and lunges at Experience, issuing sheep calls. They lock Grant in the barn and escape.

Angus gives a presentation to businessmen about his new genetically engineered sheep. The businessmen are soon slaughtered by the infected sheep. During the massacre, a sheep confronts Angus, but does not attack him as he has been infected. When Henry and Experience try to warn Angus, they discover he has a love for sheep. Disgusted, they leave. Henry realizes he has been infected, so, like Angus, sheep no longer attack him. Henry and Experience go their separate ways. Henry ends up fighting with his brother, who has now transformed into a gargantuan sheep monster: however, only as intelligent as a sheep, Angus is kept in check by Henry and the farm's sheepdog. While he is cornered by the dog, the revolving propeller of the family plane cuts into Angus and wounds him badly.

Tucker suddenly arrives and disinfects Angus and Henry with more amniotic fluid, administered via a medicine nozzle designed for sheep. Experience arrives. Even though Angus is now a human, he goes back to the sheep and tells them to bite him again. The sheep, driven mad by the smell of blood, devour Angus. Eventually, all the sheep are contained and killed in a giant bonfire of ignited sheep flatulence. The cure is given to the surviving were-sheep, including Grant, and Henry decides on using organic farming methods. Meanwhile, the sheep dog looks on from a hillside, and suddenly bleats like a sheep. 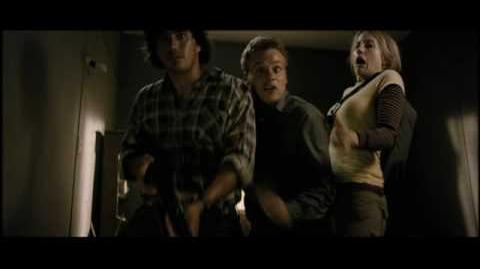 Retrieved from "https://horror.fandom.com/wiki/Black_Sheep_(2007)?oldid=124679"
Community content is available under CC-BY-SA unless otherwise noted.