This page needs improvement. It can be improved by: plot, pictures, list of deaths, quote on top, trivia

Black Water is a 2007 horror-thriller film set in the mangrove seas of northern Australia. It was written and directed by Andrew Traucki and David Nerlich and stars Diana Glenn, Maeve Dermody and Andy Rodoreda. The film was inspired by the true story of a crocodile attack in Australia's Northern Territory in December 2003.

The film is about a terrifying tale of survival in the mangrove swamps of Northern Australia.

The location standing in for a vast mangrove sea system in northern Australia was actually in the directors' home town of Sydney, 25 minutes from the Central business district In a small suburb called Oatley. They also spent a week in Darwin shooting footage of real saltwater crocodiles that were transplanted into the location along with the actors, with the directing team doing their own CG special effects to achieve this.

Black Water achieved positive reviews from critics achieving a "fresh" score of 79% on Rotten tomatoes based on 19 reviews, with an average rating of 5.9/10. Critics generally praised the lack of CGI commonly used in this type of film, as well as the tense plotting and suspense built from it. Neil Smith of Total Film Magazine also praised the ending stating it was "a conclusion that refreshingly refutes the genre rulebook". 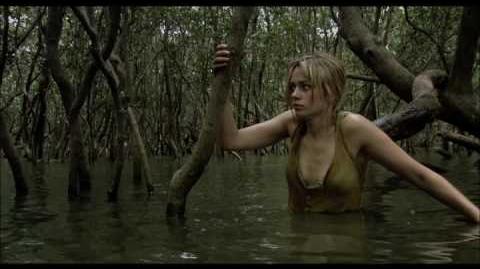 Retrieved from "https://horror.fandom.com/wiki/Black_Water_(2007)?oldid=123562"
Community content is available under CC-BY-SA unless otherwise noted.