This page needs improvement. It can be improved by: pictures, list of deaths, information, quote

Blade is a 1998 American vampire-superhero action film starring Wesley Snipes, Kris Kristofferson and Stephen Dorff, and is loosely based on the Marvel Comics character Blade. Snipes plays Blade, a human-vampire hybrid who protects humans from vampires.

Warning: this text contains details about the plot/ending of the film.
In 1967, a pregnant woman is attacked by a vampire while giving birth. Doctors are able to save her baby, but the woman dies of infection.

Thirty years later, in 1997, the child has become the vampire hunter Blade. He raids a Los Angeles rave club owned by the vampire Deacon Frost. Police take one of the vampires to the hospital, where he kills Dr. Curtis Webb and feeds on hematologist Karen Jenson and escapes. Blade takes Karen to a safe house where she is treated by his old friend Abraham Whistler. Whistler explains that he and Blade have been waging a secret war against vampires using weapons based on their elemental weaknesses, such as sunlight and silver. As Karen is now "marked" by the bite of a vampire, both he and Blade tell her to leave the city.

Meanwhile, at a meeting of vampire elders, Frost, the leader of a faction of younger vampires, is rebuked for trying to incite war between vampires and humans. As Frost and his kind were not born as vampires and are therefore not pure-bloods, they are considered socially inferior. In response, Frost has one of the elders executed and strips the others of their authority.

Upon returning to her apartment, Karen is attacked by police officer Krieger, who is a "familiar", a human slave controlled by a vampire. Blade subdues Krieger and uses information from him to locate an archive of vampire history. Later, at the hideout, Blade injects himself with a special serum that prevents him from succumbing to his desire to drink blood. However, the serum is beginning to lose its effectiveness due to overuse. Krieger informs Frost of what happened, and Frost kills and eats Krieger.

While experimenting with the anticoagulant EDTA as a possible replacement, Karen discovers that it explodes when combined with vampire blood. She manages to synthesize a vaccine that can cure the infected, but learns that it will not work on a human-vampire hybrid like Blade. Karen is confident that she can cure Blade's bloodthirst but it would take her years of treating it. Frost and his men attack the hideout, infect Whistler, and abduct Karen. When Blade returns, he helps Whistler commit suicide and arms himself with special syringes filled with EDTA.

When Blade attempts to rescue Karen from Frost's penthouse, he is shocked to find his still alive mother, who reveals that she came back that very night and was brought in by Frost, who appears and reveals himself as the vampire who bit her. Blade is then subdued and taken to the Temple of Eternal Night, where Frost plans to perform the summoning ritual for La Magra, the vampire blood god. Karen is thrown into a pit to be devoured by Webb, who has transformed into a decomposing zombie-like creature. Karen injures Webb with a sharp bone and escapes. Blade is drained of his blood, but Karen allows him to drink from her, causing him to recover. Frost completes the ritual and obtains the powers of La Magra. Blade confronts Frost after killing all of his minions, including Blade's mother. During their fight, Blade injects Frost with all of the syringes, causing his body to inflate and explode, killing him.

Karen offers to help Blade cure himself, but he asks her to create a new serum instead. In a brief epilogue, Blade confronts a vampire in Moscow. 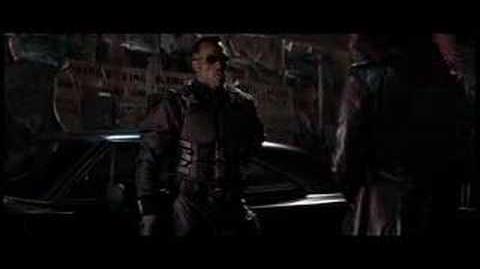 Retrieved from "https://horror.fandom.com/wiki/Blade_(1998)?oldid=137980"
Community content is available under CC-BY-SA unless otherwise noted.