This page needs improvement. It can be improved by: plot, pictures, list of deaths, quote, trivia

Blood for Dracula is a 1974 film that is also known as Andy Warhol's Dracula. The movie is one of many throughout horror film history to feature the character of Count Dracula, although Blood is known to be divergent from other depictions of the vampire Dracula's exploits, in that it features a version of Dracula that must feast only on the blood of virgins, and is very weak and unable to hunt without assistance. In this depiction, Dracula is the only character who has anything to do with the Dracula mythos of Bram Stoker's original novel.

An ailing vampire count travels to Italy with his servant to find a bride.

This article is a stub. You can help Horror Film Wiki by expanding it.

Andy Warhol produced the film after becoming notable for his independent films in the 1960s, many of which never went to a wide thatrical release. Warhol's contribution to the creation of this film included a prominent heroic role for one of Warhol's favorite subjects, Joe Dallesandro. European actor Udo Kier starred in the titular role as Dracula. The film was filmed overseas from Warhol's studio by a foreign production, and was quite graphic.

The film's original cut received an X rating, and some R rated edits (removing some of the sex and gore) have been created to help increase the film's distribution. The X rating no longer exists, and the complete graphic cut is usually marked "unrated".

Blood for Dracula was filmed concurrently with Flesh for Frankenstein, which also feature Dallesandro and Kier in similar roles. 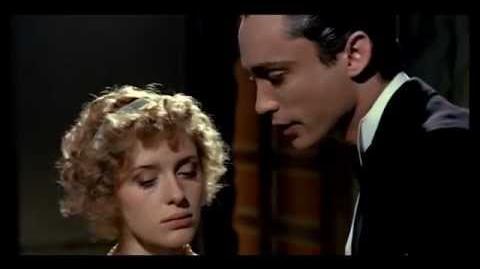 Retrieved from "https://horror.fandom.com/wiki/Blood_for_Dracula_(1974)?oldid=127784"
Community content is available under CC-BY-SA unless otherwise noted.