This page needs improvement. It can be improved by: more detailed plot, cast, pictures, list of deaths, information, quote, trivia

The movie starts out in 1970. A man walks into Meadowvale hospital. 3 mothers are giving birth. During that time, a solar eclipse occurs. At the peak of the solar eclipse, the 3 babies are born. Then it zooms to 1980 showing a young couple playing ambulance. They then go in a dug grave. When dirt falls, the man looks up. When he turns around, he is hit in the face with a shovel. The woman is strangled to death and the man is beat to death with a shovel.

A young woman makes a sandwich, goes to a table and studies astrology. Her little brother comes in through the window. The young woman, whose name is Joyce, asks him what he was doing. He replies with "I was feeding the dog." 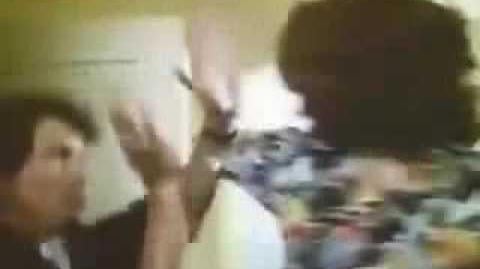 Retrieved from "https://horror.fandom.com/wiki/Bloody_Birthday_(1981)?oldid=139080"
Community content is available under CC-BY-SA unless otherwise noted.