Julie McConnell, along with her friends Whitney, Tobe, Dean and Jason arrive at Camp Placid Pines to work as counselors. They meet several other counselors, including Julie's co-couselor Drew, and their boss, Patrick.

The counselors get to work, cleaning up, bringing in food, etc. And soon, Julie gets a strange warning from an eccentric old groundskeeper and the counselors are murdered, one-by-one by a hockey-mask donning killer with a thirst for blood.

Julie begins digging into the past of Camp Placid Pines as her friends drop like flies. She discovers that in the 70's, a boy named Nelson Hammond fell into the lake and almost drowned after a game of "Bloody Murder" (a form of hide-and-seek).

A few years later, Nelson killed one of his fellow counselors and was sent to an insane hospital and was never heard from again. As the killer closes in on Julie, she starts narrowing down suspects. After several clues, she discovers it was Drew, whose father was the counselor killed by Nelson Hammond. She accuses Drew, but discovers her accusations are false when the killer attacks.

Julie finally realizes that the killer has been Patrick all along. He is really Nelson Hammond! After a chase, Nelson is shot by Drew and taken away by the police.

Julie, Drew, Tobe and Jason end up surviving in the end. Whitney is stabbed to death in the mess hall, another counselor named Brad is shot with arrows and killed, Dean is slashed in the throat and stabbed with a garden claw, and a counselor named Doug is impaled with a spear. 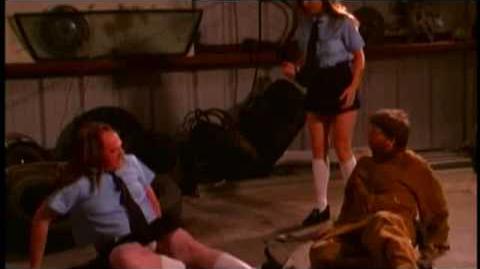 Retrieved from "https://horror.fandom.com/wiki/Bloody_Murder_(2000)?oldid=127811"
Community content is available under CC-BY-SA unless otherwise noted.