Bloody Murder 2: Closing Camp is a 2003 slasher film directed by Rob Spera and starring Katy Woodruff, Tiffany Shepis, and Tyler Sedustine. It is the sequel to Bloody Murder and focuses on a group of free-spirited teenagers closing down Camp Placid Pines for the winter, and getting butchered by a killer in a hockey mask.

Coming to Camp Placid Pines is difficult for Tracy, her brother Jason was killed by Trevor Moorehouse, a local camp legend, in the surrounding woods. Tracy and several other teenagers come to Camp Placid Pines to lock the camp down for the winter, including Angela, Ryan, Sophie, James, Tracy's boyfriend Mike, Elvis and along with the boss Rick. That night, they all have a campfire celebrating the kid's leaving and decide to play a game of "Bloody Murder." Tracy retreats to her cabin and Ryan tells the story of "Trevor Moorehouse-the son of the camp director who "ratted out" the counselors and told his father; the counselors wanted to get back at Trevor so they pulled a prank that went out of control and Trevor fell down a ravine and was seriously injured and deformed. He was sent to a mental hospital and he broke out to seek his vengeance. The group plays a game of Bloody Murder and James is "It". After a harmless prank, everyone retreats to their cabins and James stays at the campfire to put the flames out, and is attacked and brutally murdered by a man wearing a hockey mask. The next morning, everyone wonders about James' whereabouts. More work is done, and Ryan is killed next when he is lured to the woods and shot in the neck with an arrow by the hockey-masked killer.Tracy thinks she sees Trevor Moorehouse and runs to tell the other. Rick calls the police, and the Sheriff comes down to investigate. Everyone now knows Ryan is missing, but he is presumed to have quit. Night falls, and the fun begins...

Angela ends up having sex with Mike, and finds Ryan's dead body. They all meet in the lodge and are questioned by the police officer. Elvis leaves to take a shower and is stabbed to death by the killer. His body is found, and all that's left is Tracy, Sophie, Rick and Angela with Mike missing. The next morning, Tracy does a little sleuthing. Discovering that the last time Ryan was seen was when Rick paged him, Tracy watches some security camera videos to witness Mike going inside a cabin and coming out dressed as Trevor Moorehouse! Mike enters the cabin, Tracy screams for help and Mike tries to flee, but is taken in by the police. Tracy still doesn't think so, as the tape could have been doctored, and Angela is sent off to look for Ryan's pager to get evidence against Rick and is killed by Trevor. Tracy orders Sophie to go get the keys to the truck so they can leave and Tracy searches Rick's cabin, finding James' backpack coated with blood. Rick appears and explains the backpack, but in disbelief, Tracy flees, Rick in pursuit. Sophie is attacked, Tracy hides from Rick. She then is cornered, but a police officer arrives and shoots Rick down.

Tracy is driven by the Sheriff to the station, but they stop in on the road where the Sheriff reveals himself as the killer! Mike is dead in the backseat. Tracy is handcuffed to a tree, and the Sheriff explains he was Trevor's father-the camp director! Sophie appears and struggles with the Sheriff. She then flees to the camp where she hides. Tracy breaks free, meets up with Sophie and they run from the killer, a cat-and-mouse game ensues. They manage to escape into the woods, and the Sherriff corners them again, and then the REAL Trevor Moorehouse appears, kills his father, and drags his body into the woods. Tracy and Sophie, lone survivors, pass out under a tree as morning comes... 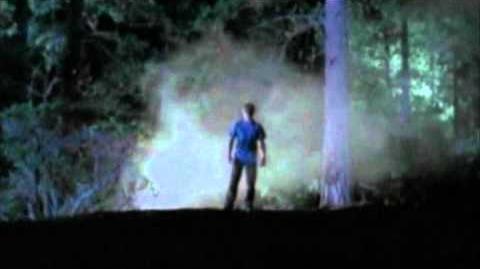 Retrieved from "https://horror.fandom.com/wiki/Bloody_Murder_2:_Closing_Camp_(2003)?oldid=127814"
Community content is available under CC-BY-SA unless otherwise noted.