This page needs improvement. It can be improved by: pictures, information, quote, trivia

This page is about the remake. For the original film, see The Boogeyman (1980).

Boogeyman is a 2005 American horror film, directed by Stephen T. Kay. The film is a take on the classic "boogeyman", or monster in the closet.

On the surface, Tim Jensen seems to be a normal person, with a steady job and a good relationship with his girlfriend Jessica; however, a terrifying event that he witnessed as a child has left him traumatized, where his father was taken by the Boogeyman, an evil creature which lives in all closets worldwide. Since then, he has taken precautions to ensure that the Boogeyman cannot get to him, such as sleeping on a mattress on the floor, and removing all closets from his home and keeping all his clothes in a dresser drawer.

After a Thanksgiving trip with Jessica to her parents' house, Tim has a premonition in which his Mother tells him to return to the family home. Tim awakes and will not relax until he finds out what happened with his mother. When he phones the hospital, he discovers his mother has died. Upon returning to the psychiatric ward where he grew up after his father died, he discovers that one of the patients, a young girl, is being threatened by the Boogeyman, which this time lives in the ceiling of her room.

Upon a suggestion by his psychiatrist that returning to his family home to spend the night in that house would be a good idea, Tim returns to his old Victorian style house in the open country, where he relives memories of his mother telling his father that the Boogeyman does not exist and therefore cannot possibly harm Tim. Tim is briefly attacked by the Boogeyman when he enters the downstairs closet; however, despite enjoying a reunion with Kate, his childhood friend, he becomes convinced that he is being watched by the same entity that has terrorized him his entire life. Tim meets a young girl in his woodshed, named Franny, who wants to know that if it's true that the Boogeyman murdered Tim's father. Tim does not know where she heard this information, and he firmly tells her that the Boogeyman cannot exist; however, after Franny leaves, Tim reenters the woodshed and discovers a disturbing file of Missing Person lists and documents left by Franny, and upon flicking through them, he discovers a collection of missing children whom were all taken by the Boogeyman. The Boogeyman has been taking various children throughout history. When Tim looks down from a photo of a missing boy, he discovers the same missing boy standing before him. When he looks around, Tim discovers a huge crowd of the missing children moving towards him, their faces deadly white and ghostly pale. The children all come up and start brushing Tim, who faints. When he awakes, he is alone again in the house.

Tim panics and attempts to leave but Jessica, his girlfriend, abruptly shows up takes Tim out of the house for a night in a quiet motel, where she is murdered by the Boogeyman, who spies at her through the closet in the bathroom before dragging her into the bath.

Tim returns from getting ice and preparing drinks and enters the bathroom, where he finds that Jessica is missing. He realizes what has occurred, and stumbles blindly into a closet, and then walks out into his family home, just as Kate, his friend, has returned to his home and, upon hearing noises from the closets, was about to open the door herself. She is momentarily frightened by Tim's mysterious appearance, but then begins to worry when Tim panics about Jessica, a woman she never met, and then Tim drags Kate back to the hotel, where they find the empty bath; this time with blood on the side. They both wonder what has happened; Kate thinking that Tim might've harmed Jessica; but Tim angrily denies it. Soon the Boogeyman starts showing up in various unexpected places, including Kate's house. Tim attempts to warn Kate of the danger she is in, but she freaks out when Tim begins acting paranoid and strange. Frustrated at Tim's refusal to tell her what is really wrong with him, Kate claims that the person Tim saw in her house was in fact her deaf father. Kate calls Tim's Uncle Mike to have him check on Tim.

Tim returns to his house and meets Franny once more, who leads him to a house full of proclamations describing the Boogeyman. There is a chair in the middle of the room facing a closet. Tim remembers this room as being the home of a doctor whom everyone thought was insane. Franny then reveals herself to be one of the dead kids whom the Boogeyman murdered (and the daughter of the "insane" doctor), and disappears, telling Tim he'd best go to the place where it all started.

Mike arrives at the house to check on Tim to find it deserted. Tim returns to his house to find Mike's truck but rushes in to find that the Boogeyman has taken Mike. Tim proceeds to board up all of the doors in the house except his bedroom closet where he bolts a chair to the floor facing the closet in an attempt to lure the Boogeyman out. Franny joins Tim who tells him to enter the closet. When Tim does, he reappears at the hotel revealing that closets and beds are portals in time and space. There he watches the Boogeyman kill Jessica in the bathtub. Tim is knocked back against the wall and busts the back of his head open. He leaves the hotel through the same closet as before after touching the tub with his bloody hand revealing the blood he and Kate saw earlier was his own. The closet returns him to his house once again where Mike begins firing a nail gun past Tim at the Boogeyman. Mike is attacked and killed by the Boogeyman who wraps him in plastic sheeting and drags him into a closet. Tim follows where he reunites with Kate at her house and saves her from an attack seconds after her phone call to Mike from earlier. The Boogeyman attempts to drag Kate under her bed and Tim holds on to her which deposits them back in Tim's old room. The monster emerges from the closet and turns into various toys Tim was afraid of as a child. He first appears as a murder of crows which Tim smashes the toy equivalent with a baseball bat sending the monster back to the closet. The Boogeyman resurfaces as an electrical vortex trying to draw Tim into the closet once more, but Tim smashes the ball of electricity in a glass case the monster was mimicking. Tim destroys a hooded shirt that scared him as a child further damaging the monster. The monster appears again as a humanoid figurine which stood on Tim's bedside table and frightened him as a child. The Boogeyman attempts to drag Tim back into a closet to kill him, but realizing that the monster is only posing as the figurine, Tim picks it up and slams the toy against a dresser, smashing the torso to pieces, causing the Boogeyman to suffer the same injury knocking the Boogeyman back toward the closet. The Boogeyman resurfaces however causes a vortex of winds, clawing at Tim's legs, but Tim and Kate cling onto grounded objects in the room and Tim kicks the Boogeyman in the jaw, causing him to fall back into the closet and into an ethereal pit.

With the Boogeyman gone, Tim hopes that his and Kate's lives will be safer. Morning dawns and Tim already feels better and the credits roll. However, a post-credits scene reveals a young girl being tormented by the monster, revealing that the Boogeyman has resurfaced out of the closet. 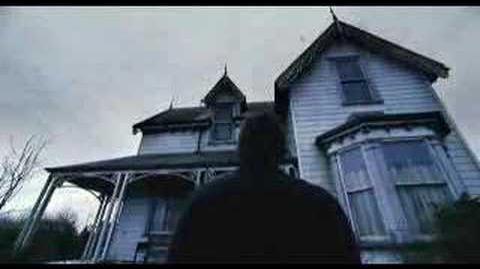 Retrieved from "https://horror.fandom.com/wiki/Boogeyman_(2005)?oldid=127831"
Community content is available under CC-BY-SA unless otherwise noted.