This page needs improvement. It can be improved by: pictures, information, quote, trivia

Boogeyman 2 is a 2007 horror film directed by Jeff Betancourt and starring Danielle Savre. It is the sequel to the 2005 film Boogeyman. Despite being a direct-to-DVD release, the film received a very rare theatrical run in some countries including Russia, Italy, Mexico and Venezuela.

Laura Porter, who as a child witnessed both her parents being brutally murdered by a hooded man, along with her brother Henry. A decade later, she still is having trouble dealing with the traumatic event. She checks into a mental health clinic run by Dr. Mitchell Allen and joins a therapy group under the care of Dr. Jessica Ryan (Renee O'Connor). Dr. Ryan has a fear of becoming comatose like her schizophrenic mother. Her brother Henry, who was in the same therapy group, seems to be doing fine and is seemingly cured. Henry goes off to a job interview. Laura gets comfortable with the group which consists of scotophobic Mark, germaphobic Paul, masochistic Alison, agoraphobic Darren who is scared of commitment and relationships, and Nicky, a bulimic girl who fears extreme weight gain.

Laura struggles in facing her fear of the Boogeyman, the entity that Laura believes killed her parents. Then, the therapy group begins to get murdered, one by one. All of their deaths relate to their fears. Mark falls down the elevator shaft, trying to escape from the darkness when the lights go out, and is torn in half. The next is Paul, who accidentally eats a cockroach after finding them in his bag of chips. The killer, a mysterious man wearing a Boogeyman mask and cloak, then hands him a bottle of cleaning solution, which Paul drinks and burns a hole in his throat. Laura begins to suspect these were not accidents. The lights go out at the hospital and all that's left is Laura, Alison, Darren, Nicky, Dr. Ryan and Gloria, the receptionist. Gloria (Lesli Margherita) goes to the basement to check the lights. Alison is killed when the Boogeyman ties her to the bed and places maggots on her arms, which crawl into Alison's skin using the cuts, forcing her to cut them out, killing herself in the process.

Dr. Ryan goes to the basement to check on Gloria and is electrocuted when the Boogeyman throws an electrical cord into a puddle of water she is standing in. Laura finds a file on her brother and ones on other patients with Bogyphobia (what Laura has). She finds out that all Bogyphobia patients including Tim Jensen (character from the first film) have committed suicide after being treated by Dr. Allen. Darren and Nicky have sexual intercourse in the locker room and Laura finds Alison. She gets Darren and Nicky, but when they get to where Alison was, the blood and the maggots have been cleaned up. Darren and Nicky think she's crazy. Darren and Nicky go to Darren's room, where they have an argument. Darren thinks they shouldn't have a relationship. Darren forces Nicky out of the room and is killed when the Boogeyman painfully cuts him open and takes out his heart.

Laura goes to the basement when she hears Nicky scream and finds her on a table. Nicky has hoses attached to her, filling her with bile until she explodes. Laura runs away in shock, and the Boogeyman attacks her. He chases her through the hospital, where she finds Gloria dead and Dr. Ryan barely alive and mumbling, in some sort of trance. Laura begins a cat and mouse game with the Boogeyman, who chases her through the underground storage area, finally running into Dr. Allen who thinks Laura committed the killings. He tries to sedate her, but the Boogeyman stabs Dr. Allen and shoves two needles in his eyes. The Boogeyman is revealed to be Henry, Laura's brother. Henry was treated by Dr. Allen. Dr. Allen abused Henry, locking him in a closet.

Henry was beginning to doubt the Boogeyman's existence, until the Boogeyman himself appeared in the closet and entered into him. Whist possessing Henry, the Boogeyman decided to take revenge on those who didn't believe in him, and this way he would make himself known to the world. Henry then chases Laura. She hides in a room, but Henry finds her and she decapitates him with garden shears. The police arrive and discover that under the Boogeyman mask was Dr Ryan. Between killing Dr. Allen and Laura running and hiding, he put a delusional Dr. Ryan in the Boogeyman mask and Laura decapitated Dr. Ryan. Knowing Henry is running free she has a breakdown and is dragged away by the police. 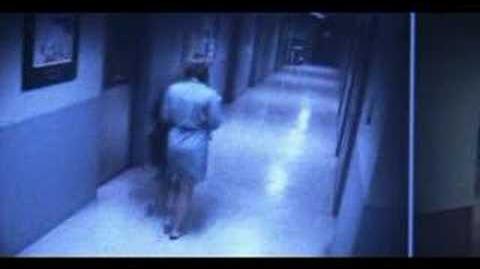 Retrieved from "https://horror.fandom.com/wiki/Boogeyman_2_(2007)?oldid=127836"
Community content is available under CC-BY-SA unless otherwise noted.