Brian begins an unwilling symbiotic relationship with a malevolent leech-like brain-eating parasite called "Aylmer". Aylmer secretes a highly addictive, hallucinogenic blue fluid into Brian's brain. In return for a steady supply of the fluid, Brian must seek out human victims for Aylmer, so that he can devour their brains. All the while, though, as Brian adopts a heavily secluded life in his indulgence of Aylmer's fluids, it begins to draw a rift in his relationship with his girlfriend Barbara and his brother.

The film was heavily edited by the MPAA in order to receive an R-rating.

Near the end of the film, there is a brief appearance by a man on the subway with a large wicker basket. This is meant to be a cameo appearance by Duane Bradley, the main character from Henenlotter's earlier film Basket Case.

The film was given a limited release theatrically in the United States by Palisades Entertainment Group in 1988. It was subsequently released on VHS by Paramount Home Entertainment.

The film was released on DVD by Synapse Films in 2007. This special edition release features commentary by Henenlotter and reinstates all of the excised gore footage.

Brain Damage, is a much loved quirky film, with a Rotten Tomatoes Rating of 70%. Online movie review site, From the Mind of Tatlock, had this to say "The only thing I can really say that may convince you to give this movie a watch, is if you happened to look up the definition of 'insanely insane', you would probably see a picture of Aylmer, the brain eating slug next to it and that my friends is how an unknown, but completely enjoyable film comes to be born. Born via a phallic-looking, suave-talking, brain-eating slug creature." 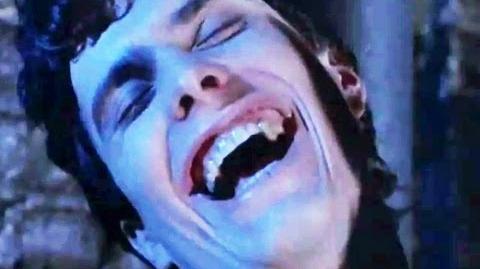 Retrieved from "https://horror.fandom.com/wiki/Brain_Damage_(1988)?oldid=127852"
Community content is available under CC-BY-SA unless otherwise noted.