In 1462, Vlad Dracula, a member of the Order of the Dragon, returns from a victory against the Turks to find his wife, Elisabeta, having committed suicide after receiving a false report of his death. The priest proceeds to tell him that his wife's soul is condemned for committing suicide. Enraged, Dracula desecrates the chapel and renounces his faith, declaring that he will rise from the grave to avenge Elisabeta with all the powers of darkness. He then stabs the chapel's stone cross with his sword and drinks the blood that pours out of it.

In 1897, newly qualified solicitor Jonathan Harker takes the Transylvanian Count Dracula as a client from his colleague Renfield, who has gone insane. Jonathan travels to Transylvania to arrange Dracula's real estate acquisitions in London, including Carfax Abbey. Jonathan meets Dracula, who discovers a picture of Harker's fiancée, Mina and believes that she is the reincarnation of Elisabeta. Dracula leaves Jonathan to be attacked and fed upon by his brides, Johnathan who is confused and already has some blood loss goes with it, which leads to a very rated R moment. while Dracula sails to England with boxes of his native Transylvanian soil, taking up residence at Carfax Abbey. His arrival is foretold by the ravings of Renfield, now an inmate in Dr. Jack Seward's insane asylum.

In London, Dracula emerges as a wolf-like creature amid a fierce thunderstorm and hypnotically seduces, then bites Lucy Westenra, with whom Mina is staying while Jonathan is in Transylvania. Lucy's deteriorating health and behavioral changes prompt her former suitors Quincey Morris and Dr. Seward, along with her fiancé, Arthur Holmwood, to summon Dr. Abraham Van Helsing, who recognizes Lucy as the victim of a vampire. Dracula, appearing young and handsome during daylight, meets and charms Mina. When Mina receives word from Jonathan, who has escaped the castle and recovered at a convent, she travels to Romania to marry him. In his fury, Dracula transforms Lucy into a vampire. Van Helsing, Holmwood, Seward and Morris kill the now undead Lucy the following night.

After Jonathan and Mina return to London, Jonathan and Van Helsing lead the others to Carfax Abbey, where they destroy the Count's boxes of soil. Dracula enters the asylum, where he kills Renfield for warning Mina of his presence. He visits Mina, who is staying in Seward's quarters while the others hunt Dracula, and confesses that he murdered Lucy and has been terrorizing Mina's friends. Confused and angry, Mina admits that she still loves him and remembers her previous life as Elisabeta. At her insistence, Dracula begins transforming her into a vampire. The hunters burst into the bedroom, and Dracula claims Mina as his bride before escaping. As Mina changes, Van Helsing hypnotizes her and learns via her connection with Dracula that he is sailing home in his last remaining box. The hunters depart for Varna to intercept him, but Dracula reads Mina's mind and evades them. The hunters split up; Van Helsing and Mina travel to the Borgo Pass and the castle, while the others try to stop the gypsies transporting the Count.

At night, Van Helsing and Mina are approached by Dracula's brides. Initially, they frighten Mina, but she eventually succumbs to their chanting and attempts to seduce Van Helsing. Before Mina can feed on his blood, Van Helsing places a communion wafer on her forehead, leaving a mark. He surrounds them with a ring of fire to protect them from the brides, then infiltrates the castle and decapitates them the following morning. As sunset approaches, Dracula's carriage arrives at the castle, pursued by the hunters. A fight between the hunters and gypsies ensues. Morris is stabbed in the back during the fight and at sunset Dracula bursts from his coffin. Harker slits his throat while a wounded Morris stabs him in the heart with a Bowie knife. As Dracula staggers, Mina rushes to his defense. Holmwood tries to attack but Van Helsing and Harker allow her to retreat with the Count. Morris dies of his wound, surrounded by his friends.

In the chapel where he renounced his faith, Dracula lies dying in an ancient demonic form. They share a kiss as the candles adorning the chapel light up and the cross repairs itself. Dracula turns back to his younger self and asks Mina to give him peace. Mina thrusts the knife through his heart and as he finally dies, the mark on her forehead disappears as Dracula's curse is lifted. She decapitates him and gazes up at the fresco of Vlad and Elisabeta ascending to Heaven together, reunited at long last. 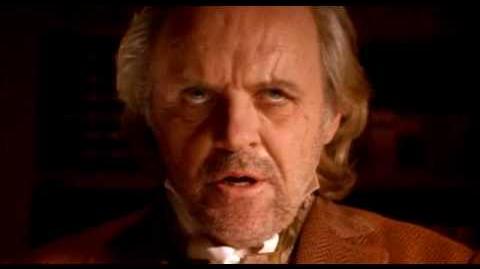 Retrieved from "https://horror.fandom.com/wiki/Bram_Stoker%27s_Dracula_(1992)?oldid=134534"
Community content is available under CC-BY-SA unless otherwise noted.