The girl with the massive tits /
The mother of Trent's child

Impaled through back on mounted deer head's antlers, thrown through 2nd window/lands on car

Bree is a minor character in the 2009 remake of Friday the 13th and a victim of Jason Voorhees. She is an extremely busty, young blonde who serves the role of the party girl/seductress. She makes a wild sex tape with her best friend’s boyfriend and purposefully gets impregnated by him during it.

She is portrayed by Julianna Guill.

Alongside several other students, Bree accompanies Trent Sutton to his parents' summer home in Crystal Lake for a party-filled weekend in 2009. Her goal for the weekend is to make a sex tape with and become Trent’s new girlfriend despite the fact he's currently dating her best friend Jenna. Reaching the Sutton's summer house, Bree is impressed by how nice it is. Bree passes the time playing games and hanging out with Trent, Chewie and Lawrence (their other friends having gone elsewhere). Then, she catches something on her camera feed that gets her eye. She sees Jenna inviting Clay Miller into the house, and says "this'll be interesting", and gives a mischievous smirk, knowing that Trent isn't going to like this and that she can use this to help achieve her scheme, or use this as a backup plan. She grabs a beer and offers it to Clay in a flirting tone but Trent sees Clay and pushes her offering away and says he needs to leave. As soon as Jenna leaves with Clay, Bree lustfully offers Trent the beer which he accepts. As night begins to fall, Bree gets drunk and starts dancing around in front of Lawrence and Chewie hoping one of them takes her to bed. When Chewie gets the courage to walk up to her, she begins flirting with him, seducing him into drinking a flaming shot. When Chewie accidentally breaks a chair belonging to Trent's father (having burned himself on the shot glass) and heads out to the tool shed, Bree moves on and walks up to the angry Trent and seduces him by telling him to forget about the broken chair and suggestively tells him to finish the wine by themselves. After he accepts, Bree grabs him by the hand and leads him upstairs smirking about it. Once there, Bree can't help but smile as she excitedly kisses Trent full on the lips and shoves him onto the bed. She strips off her top and climbs onto Trent and quickly kisses him again, but shoves him back down, showing she was in control now. Bree extends her purple tongue and runs it along her teeth as she removes her bra. She leans back and moves her long blonde hair out of the way so she can proudly present to Trent her massive, round, natural, milky-white tits. Trent's mind is blown by the size of her gigantic, natural breast and tells Bree, “your tits are stupendous” causing her to laugh and sarcastically reply that he “really knows how to make a girl feel special“ and she proceeds crawl on him and thrust her tongue into her prey’s mouth, before undoing his pants. After seeing her voluptuous nude body, Trent decides to not use any protection because he doesn't care if he gets Bree pregnant with a body like hers. The two engage in vigorous, unprotected sex. (unaware they are being glared at by Jason Voorhees through a window). As they have wild sex, Bree videotapes the act on her video camera that's streaming on the flat screen TV in the corner of the room, hoping Trent gets her pregnant. As she records their scandalous affair, Trent warns her about their sex tape going on the internet but she laughs him off as she begins riding him harder, as her huge tits bounce up and down. Bree and Trent are taken by surprise when Jenna has suddenly returned and interrupts their session. The cheating couple ignores Trent's girlfriend Jenna, and continue having sex as she is banging on the door, trying to warn them about Jason being outside. Trent yells at Jenna to shut up, but Bree is tired of him ignoring her and she leans down and forcefully kisses him. Bree moans into the kiss as she drags her giant tits along his chest. Their prolonged sexual encounter ends when Bree finally gets Trent to ejaculate inside of her as they both have incredibly intense orgasms together at the same time. Bree, drenched in sweat and gasping for air, rolls off her lover and smiles just as Trent exhales in excitement. Bree then cuddles with her new boyfriend, wrapping her arm around his chest just as he wraps his arm around her and she presses her fat tits into his chest. Bree is absolutely ecstatic that not only did she get him to impregnate her but she is his new girlfriend, and there's nothing Jenna can do about it now. As they cuddle together, a exhausted Trent slowly describes how great the sex was, she finishes her equally exhausted lover's sentence, asking if the the sex was “stupendous?“ When he agrees it was the best sex either of them have ever had, Bree giggles with her new man and she decides to bury her head into his neck and nuzzle and kiss him. While the newly formed couple continue to rest the power goes out (presumably Jason's doing), Bree comes out with Trent as his new trophy girl and they head to the living room, where they are told by Jenna and Clay (who Trent gets in brief fight with) about a killer being on the loose.

Bree goes upstairs and into the bathroom. Thinking someone else is in the room, Bree looks around and, after pulling back the shower curtain, is grabbed from behind and gagged by Jason, who had snuck in through the open window. Lifted off the floor, Bree is impaled on a pair of mounted deer antlers attached to the door, killing her instantly as she goes from being Trent’s trophy to Jason’s trophy kill. A few minutes after her death, Bree's body falls off the antlers, the noise startling Trent into accidentally shooting her corpse several times. Jason later throws Bree's blood soaked body out a window and onto Officer Bracke's car when Trent tries using it to escape. 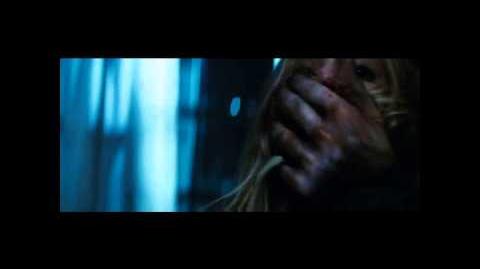 Retrieved from "https://horror.fandom.com/wiki/Bree_(Friday_the_13th)?oldid=150341"
Community content is available under CC-BY-SA unless otherwise noted.