Bride of Chucky is a 1998 American-Canadian horror film, directed by Ronny Yu It is the 4th entry in the Child's Play series. The film stars Jennifer Tilly (who plays and voices the titular character the Bride of Chucky or Tiffany) and Brad Dourif (who voices Chucky). This movie co-stars John Ritter, Katherine Heigl and Nick Stabile. The music score is by Graeme Revell (who previously did the music for Child's Play 2).

Bride of Chucky marks the point where the series takes a more humorous turn, often into self-referential parody. Thus the change from the Child's Play in the title. Contrary to the previous three films, the violence in Bride of Chucky is punctuated by humor to deflate the macabre visuals. The film follows the events of the previous films continuity-wise, but not tonally or in a continuation of those film's overall plot (where Chucky pursued the character Andy "Andrew" Barclay). This film also marks Chucky's new permanent look, a more frightening appearance in which he was covered in scars.

Chucky, the doll possessed by a serial killer, discovers the perfect mate to kill and revive into the body of another doll.

Warning: this text contains details about the plot/ending of the film.
Tiffany "Tiff", a former lover and accomplice of serial killer Charles Lee Ray, acquires Chucky's remains after bribing and later slaughtering a police officer in cold blood without showing any remorse, who removed the dismembered children's doll parts from an evidence locker. Believing Ray's soul to be inhabiting the doll, Tiffany crudely stitches Chucky back together and reenacts the voodoo ritual which instilled Ray inside the doll a decade ago. Though her chants initially fail to produce results, Chucky unexpectedly springs to life and smothers Tiffany's goth admirer, Damien, as Tiffany looks on with excitement. Chucky, who is still intent on becoming human again, lays out a plan to retrieve the body-switching amulet Ray was wearing on the night he was killed. The amulet was buried along with his body in a cemetery in Hackensack, New Jersey.

Hoping to pick up where she and Ray left off, Tiffany presents Chucky with a diamond ring, which he left for her. Upon realizing that Tiffany believed the gift to be an engagement ring, Chucky bursts out laughing hysterically, explaining that he stole it from one of his wealthier victims when he was a notorious human serial killer. Heartbroken and enraged, Tiffany punishes Chucky by locking him in a playpen. That next morning, Tiffany approaches a young neighbor named Jesse with an offer to ferry Chucky's body across state lines in exchange for money. Eager to elope with his girlfriend named Jade, and having been foiled in the past by her possessive uncle, Police Chief Warren Kincaid, Jesse accepts the offer.

Inside Tiffany's mobile home, Chucky tries to woo her into freeing him. As a mocking gesture, Tiffany responds by lowering a female children's doll, clad in a miniature wedding dress, into Chucky's playpen. Now a furious Chucky breaks free and surprises Tiffany while she is bathing, dropping a television set into her bathtub and electrocuting her to death. Still dragging the bridal doll, Chucky then recites the familiar voodoo chant, transferring Tiffany's soul into the doll. Chucky blackmails her by pointing out her only hope for becoming human again is to help him steal the amulet. After Tiffany makes a series of vivid alterations to her doll body, the killers pretend to be inanimate as Jesse arrives to pick up the dolls. He then goes to rendezvous with Jade, unaware that the dolls plan on appropriating their bodies once they have the amulet.

Midway into the trip, Jade's overprotective uncle tracks down the van and starts to inspect it while the couple is away. Annoyed by Kincaid's interference, the killers rig a trap which embeds several nails into the Chief's face, then hide his body inside an on board trunk. Later, Jesse and Jade stop for supplies and attract the notice of a police officer, who detects the scent of marijuana (which Chucky is smoking). Chucky mistakenly throws the narcotics into view, giving the officer enough cause to detain Jesse. Chucky sneaks over to the officer's squad car, stuffs a wadded-up shirt into the gas tank, and lights it on fire, killing the officer in an explosion.

Shaken by the prospect that one of them might be a murderer or serial killer, both Jesse and Jade nevertheless stop at a couples-only hotel to get married. During the ceremony, Chief Kincaid awakens and rises out from the trunk in which Chucky and Tiffany had hidden him. Before he can crawl away, Chucky stabs him repeatedly in the back and re-deposits his corpse inside the trunk. Meanwhile, Jesse and Jade make the acquaintance of a pair of swingers who pickpocket their money. Tiffany follows the two thieves to their private room and tosses a bottle of champagne at the mirrored ceiling above their bed, fatally impaling the couple with shards of glass, killing them instantly as they bleeds to death. Chucky is aroused by this spectacle, and dolls have sex in the blood-soaked room.

After a maid discovers their bloody corpses in the next morning, Jesse and Jade are both convinced that the other is a killer. Following another escape, they are surprised to run into their mutual friend and confidante, David, who informs them that they are wanted for multiple murders. Whilst driving, David convinces both to stop accusing each other and patch things up. Upon realizing their misunderstanding, Jesse and Jade resolve their differences. However, David smells an unpleasant odor and uncovers Jade's dead uncle inside the trunk. Concealing his horror, David carefully takes the Chief's gun and order Jesse to pull over, prompting Chucky to reveal himself to everyone. Startled by what he has seen, David unknowingly backs into the path of an oncoming semi truck and is fatally struck before figuring out both Jade and Jesse are innocent, not guilty. A radio announcement informs Chucky the fingerprints found at the scene have been identified as those of Charles Lee Ray, and that authorities plan to exhume his body as part of the investigation.

With the van now under suspicion, the dolls transfer their quarry into a stolen recreational vehicle. Jesse is forced to be their driver while Tiffany gives Jade a makeover, getting her ready for when they transfer bodies. As the group nears the Hackensack cemetery, Jesse quips to Chucky that Tiffany "isn't much of a homemaker", due to the fact that there are several dishes in the sink. In response, Chucky orders Tiffany to clean up a little. Jade, taking her lead from Jesse, confides to Tiffany, "You were nice enough to cook for him. The least he could do is wash a dish", igniting a loud, volatile argument between the dolls. In the confusion, Jesse intentionally swerves off the road and crashes, while Tiffany is knocked into the oven by Jade. Still tied to a chair, Jade lays trapped and sees that Tiffany is still alive, though badly charred. Jesse cuts Jade free and pulls her out of the RV before sparking wiring causes the vehicle to explode. Jesse is blown clear, but Jade is taken hostage by Chucky.

Chucky approaches his open grave site, shoots the gravedigger exhuming his body in the back of the head, and sends Jade in to open his coffin at gunpoint. She reluctantly retrieves the amulet and throws it to him, but Jesse reappears, dragging Tiffany by her hair. Chucky agrees to let Jade go in exchange for Tiffany. When the couples reunite, Chucky ties the two teenagers together and starts to perform the ritual. Touched by Jesse and Jade's love for each other, and seeing Chucky's disgust at her disfigurement, Tiffany betrays Chucky by stabbing him in the back, quoting from Bride of Frankenstein: "Oh, Chucky, look at us. Don't you see? We belong dead."

Tiffany releases the two teenagers from their bonds, but Chucky retaliates by attacking Tiffany with a shovel. Chucky gets the upper hand, stabbing Tiffany in the chest; however, Jesse retrieves the shovel and knocks Chucky into his own grave, trapping him in the 6-foot pit. As Chucky screams and curses, a police Lieutenant who has been pursuing the suspicious teens arrives and witnesses the living doll. Jade takes the detective's gun and aims at Chucky, who promises to one day return just like in every sequel of the film series; "But dying is such a *****." Chucky is shot to death, his lifeless body collapsing next to his former human shell.

In the aftermath of what he has just witnessed, the Lieutenant radios in to report Jade and Jesse are innocent, and allows them to run away together. Before the rest of police unit can arrive, the Lieutenant discovers Tiffany's body. After poking her a few times, the charred doll springs to life. The Lieutenant screams in horror as a screeching, sharp-tooth baby emerges from beneath Tiffany's dress and attacks him. [1]

Despite being better critically received than its predecessor, with Jennifer Tilly and Brad Dourif's roles as Tiffany and Chucky being praised along with the element of dark comedy, the film still only received mixed reviews and earned a 43% 'Rotten' rating on Rotten Tomatoes.[2] 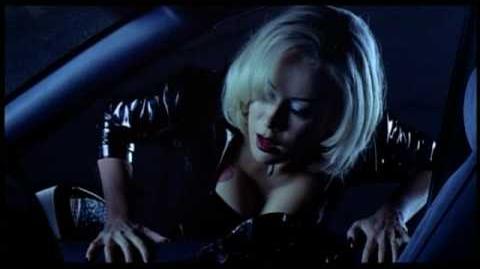 Retrieved from "https://horror.fandom.com/wiki/Bride_of_Chucky_(1998)?oldid=136534"
Community content is available under CC-BY-SA unless otherwise noted.