This page needs improvement. It can be improved by: pictures, list of deaths, information/trivia, quote

Cabin Fever 2: Spring Fever is a 2009 horror/comedy film about a deadly flesh eating virus that spreads into a high school prom. The film is a sequel to the 2002 horror film, Cabin Fever. The film stars Noah Segan, Alexi Wasser, Rusty Kelley, and Gisssupe Andrews.

A high school prom faces a deadly threat: a flesh-eating virus that spreads via a popular brand of bottled water.

About a day after the deadly virus from the first film struck, Paul wakes up disheveled in a spring, that is now filled with his infected blood. Paul starts to wonder out of the forest, leaving pieces of his own infected flesh behind. When Paul is able to make it onto the free way, a school bus smashes into him, leaving a bloody mess behind.

Winston examines the blood and assures the bus driver that he only hit a moose. The bus driver is convinced, and drives the kids to school.

The creek Paul was lying in for about a day was connected to a water bottle factory, where Paul's infected blood makes its way to the water bottles, and they are shipped to the local Springfield high school. This being shown through a cartoon short during the credits.

John, a senior at the high school, is deciding whether or not to go to Prom with his longtime crush, Cassie. His immature, social misfit friend Alex is mocking him and telling him to ask Cassie out to the prom. Then, Cassie's boyfriend Marc hears him and Alex talking, and drags him to the floor, warning him to stay away from Cassie. Alex then leaves, as he says he is going to be late for class.

John is taken to Principal Sinclair, and the two begin discussing what happened. The Principal tells him that he doesn't want to see him in his office again for fighting, and John leaves, angry that he was the one getting blamed for the whole thing.

Back in Ms. Hawker's class, Alex and John are partners in a frog dissecting lab. Alex then tells John that he needs to ask Cassie, and Ms. Hawker warns Alex that if he talks once more, he will be kicked out of her class. Alex ignores her warning and keeps talking to John. Fredrika then tells Alex that he has to be quiet if he wants to stay in the class. Alex continues talking to John and is thrown out of the class.

While angrily walking down the hallway, Alex finds a senior named Liz, who is sad because her boyfriend dumped her on account of her "job." Alex then tells her how beautiful she is to cheer her up, and she then goes on to give Alex oral sex, without Alex knowing that she is infected with the disease as well. He then asks her to go to prom with him and she says that if she can get off of work that night, she'll meet him there.

John walks out of the school at the end of the day disappointed, and his friends, Darryl and Dane tell him that he should go to their house to see Bride of the Cannibals II. He tells them that he'll see. He then finds Cassie, and the two begin to walk home together. She tells him that she just broke up with Marc. He then goes on to asking her if she would like to go to prom with him, and she tells him that she can't. John then decides to go watch Bride of the Cannibals II with his two geeky friends.

Winston goes to a pancake house where one of the water workers dies from the infection. He decides to go to the water factory, and realizes that he just unleashed the virus that is spreading through town by dumping Paul in that one creek. When he reaches the water factory, he tells the night guard to warn the CDC about the virus, and takes his police record with him. The CDC shoot the guard, but Winston escapes, and calls his cousin Herman to come pick him up to escape the quarantine of the town.

Fredrika is preparing the punch for the prom night, and uses the infected water bottles to make the red punch. Rick finds her, and they go into the pool and start having sex. Meanwhile, the janitor, who is infected, goes up to the punch bowl and starts to pee in it. Blood then starts to come out, and he leaves the punch bowl where it is. Fredrika and Rick die from the infection in the pool. And now the pool is filled with blood.

Alex, who is preparing for the prom, notices that his fingernail came off. He then superglues it on, and calls John to come to prom with him. John reluctantly agrees to go, but is worried that Cassie wont be there. Alex's mom finds a blue suit and bow tie out of the attic, and he wears that to prom. He also brings a corsage to the prom for Liz. When the two are at the prom, Alex tells John to cheer up, as they are two friends that are going to prom, how it should be. In the gym, Sandy is crying because she can't find her boyfriend Rick, who is the Prom King and she is the Prom Queen. Ms. Hawker then slaps her in the face, telling her to shut up.

Alex is disappointed that Liz didn't come, and John tells him that he is going to get some punch. He gets the punch, and just as he is about to give himself the infection, Cassie comes and tells him that she is there. John is happy until Marc fights with him, getting John kicked out of prom by Sinclair. Cassie tells him to wait, but John is too angry. John then confesses his love to Cassie, and the CDC escort the two back inside. They go to the pool room, where they find the body of Fredrika. They manage to get back into the gym. Cassie goes and gets Alex, and John gets Principal Sinclair. Cassie fills Alex in on the news just as John and Sinclair come out. When the four are all out in the hallway, Sinclair doesn't believe John and Cassie and goes to check out the door for himself, to prove that the CDC aren't outside. When realizing that the two were indeed correct, he demands to know what is going on and is shot in the forehead, leaving John, Cassie, and Alex bewildered.

Back in the gym, all the students begin to vomit up blood, including Ms. Hawker. Sandy does not care, as she is too concerned in becoming the Prom Queen. The CDC then infuse a gas that will kill all the students, (after gunshots can be heard). The Janitor comes out of nowhere in the hallway and tells the three that he needs help. However he falls, and his body blocks the doorway. John, Cassie, and Alex watch in horror as all the students attempt to get out but to no avail. The three stand against the wall, with shocked looks on their faces.

The CDC manage to get past the hallway, and John, Cassie, and Alex begin planning a way out. Alex is too busy trying to figure out what is going on. Cassie goes to adjust her suit in the women's room, leaving John and Alex alone. Alex then realizes that he is infected and starts to pee out blood and pus at a rapid speed. He then realizes that he got it from Liz. Alex goes off into the library to find the cure, ignoring John's command to stay and to get a doctor.

Cassie finds a pregnant 11th grader who sneaked her way into the prom. She watches in horror as the girl dies from blood loss. John finds her, and the two begin to find the auditorium. When they reach it, Cassie realizes that Alex is in the library. Cassie yells at John asking him why he left Alex all alone. Then, they go to the library, where Alex is in critical condition in which he can't leave anymore. However, he did find one thing: the virus is Necrotizing Faciitis. The only cure is to amputate the infected limb. But his infection is two severe and can't be removed. He dies moments later. John and Cassie go to the wood shop room, as John has the infection through his hand.

Meanwhile, Winston and Herman are leaving town, and knock out an officer after he disallows them to go any further.

Marc appears out of nowhere and attacks John. Cassie kills him by shooting a nail through his head. The two then leave through the auditorium into the nearby woods. John is captured by the CDC and Cassie escapes town with Winston and Herman.

Liz, Alex's date for the prom, is actually a stripper at Teasers. She spreads the infection to a customer. (Shown through the cartoon short like the one in the opening credits), the customer goes on to spread it to the people at his job the next day. His truck driver friend also has the infection and throws his pee at a couple driving to New Orleans for Mardi Gras. Two Mexican men from Teasers return to Mexico and spread the infection there. The disease, now a Pandemic virus, is spreading globally. Liz returns home and wishes that she had gone to prom instead of work.

After the ending credits, Darryl and Dane (the ones clearly not infected) say that prom blows. 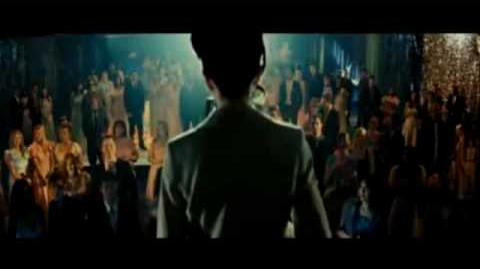