Carnosaur is a 1993 science fiction horror film starring Diane Ladd as a mad scientist who plans to recreate dinosaurs and destroy humanity. The film is loosely based on the novel Carnosaur by John Brosnan (under the pseudonym of Harry Adam Knight) that was released in 1984, but the two have little in common. They share only a few scenes, the villain still has the same basic motive, and both contain explict gore and violence. It was the only film based on a Brosnan novel to be produced in America. As it was released two weeks before the larger-scale blockbuster Jurassic Park, Carnosaur may be considered a mockbuster.

The film grossed $1,753,979 and spawned two official direct-to-video sequels, and stock-footage was recycled from all three films for 2001's Raptor.

A genetically manipulated and very hungry dinosaur escapes from a bioengineering company and reeks havoc on the local desert town. A security guard and a girl environmentalist try to stop both it and the company's doomsday bioweapon.

A genetically manipulated and very hungry dinosaur escapes from a bioengineering company and reeks havoc on the local desert town.

John Brosnan was first approached to write the screenplay in mid-1991 by Roger Corman's wife Julie, who formalized the deal at Brosnan's drinking club, and drew up the contract on a bar napkin. As the film was meant to complete with Jurassic Park, Brosnan later wrote that he was taken aback when it was revealed that the film's budget would have only been $1 million. Although concerned that the restrictive budget would require a reduction in the amount of dinosaurs used, Corman assured him that he was free to write whatever he wanted, and that any modifications would be made in the final draft. Once Brosnan sent his first draft in Hollywood, he lost all contact with the film crew. His screenplay had in fact been heavily revised to the point where his credit had been reduced to original story.

Creature designer John Carl Buechler was assigned to create the dinosaur models, under the supervision of amateur paleontologist Donald F. Glut. Buechler's special effects crew had only 10 weeks to complete both the miniature and full sized models, due to the film's limited budget. Also many of Glut's suggestions were not incorporated into the dinosaur's final designs, as many of the models were already in various stages of completition when he was consulted. For the Tyrannosaurus Rex, Buechler created numerous different sized props, including a pneumatically-operated creature measuring 16 feet in height, 25 feet in length and 450 lbs in weight, a 7-foot- tall (2.1 m) suit version and a 3-foot- tall (0.91) mechanical walking puppet. An 8-foot- tall (2.4 m) suit was made for the Deinonychus, as well as 1-foot- tall (0.30 m) mechanized walking mockup. Due to the low budget, Buechler could not create the full scale Tyrannosaurus model with standard sculpting and molding techniques; therefore, the Tyrannosaurus understructure was built using L200, a light polyurethane foam, while the skin was crafted with urethane foam sheets. Miniature models for the Tyrannosaurus and skid loader were used for most of the penultimate scene, as the full scale model was too inarticulate to fight the vehicle convincingly.

Carnosaur received a limited release theatrically from Concorde Films in May 1993. It ended up grossing $1,753,979 at the box office.

The film has been released on DVD by New Concorde Home Entertainment three times. The first release was a single disc released in April 2000. The company subsequently re-released the film in The Carnosaur Collection in 2001 and on a double feature DVD alongside sequel Carnosaur 2 in 2003. The last two versions are both currently out of print.

Review aggregator site Rotten Tomatoes noted that 11% of reviews gave it a positive review. Gene Siskel gave the film a marginal thumbs up, while Roger Ebert gave it thumbs down on Siskel & Ebert and even named it in the worst movie of 1993.; their difference in opinion was parodied in television show The Critic, where Ebert taunts Siskel you liked Carnosaur! Although John Brosnan described the dinosaurs are laughable compared to the ones in Jurassic Park, and agreed that the film was crap, he nonethless wrote that it was interesting crap, and credited it with raising greater awareness of the novel. He screened the film at a re-launch party for his novel, and stated that i will no doubt take the lead in shouting abuse in the screen. 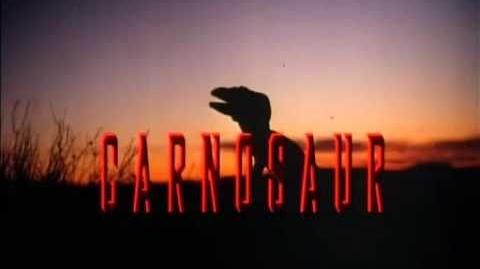 Retrieved from "https://horror.fandom.com/wiki/Carnosaur_(1993)?oldid=135320"
Community content is available under CC-BY-SA unless otherwise noted.