Carnosaur 2 is a 1995 low budget sequel to Carnosaur, and the second of the Carnosaur franchise.

A team of scientists go to a nuclear mining facility to investigate a possible meltdown and instead find a large amount of cloned dinosaurs.

Warning: this text contains details about the plot/ending of the film.
A group of technicians and scientists are called on to investigate the power shortage at a top-secret mining facility, located in the middle of nowhere. The facility, once a uranium mine, laboratory, and refinery, has been a site for radioactive dumping and top-secret experiments. They are unable to reach anyone at the facility, and when they land, no one is around. Three go to the control room to try and reboot the system, while the other three decide to form a small search party in hopes of finding the missing crew. They find the break room completely ransacked and covered in blood, however they do manage to find a teenage boy named Jesse, in a catatonic state from shock, apparently hiding from something.

They take him back to the computer control center and demand answers from Major Tom McQuade, the head of the mission, who evades their questions. When they demand to leave, he refuses and orders them back to work, despite their continuing problems with the communications equipment. The main crew heads down to a lower level to investigate the situation while the pilot, Galloway and computer expert Moses stay in the control center with Jesse. On the lower level, the crew gets more and more suspicious but McQuade continues to act as if he knows nothing. The crew finds a huge tooth which seems to bother him. Then something almost drags a horrified McQuade down a tunnel.

The crew goes from puzzled to completely horrified and runs, bent on escape, realizing that McQuade had been up to something after all. In the computer center, Jesse freaks out at the screams coming from the radio from the search party, as he knows what is posing a danger to the crew. Moses hears a strange sound and looks up to see a Velociraptor, which viciously attacks him, brutally beating and ripping him apart. Galloway returns to see the attack and flees, heading for the helicopter, where the rest of the crew decides to follow her, deciding to abandon the mission while they still can save themselves. Galloway starts up the helicopter, and waits anxiously for the rest of the crew to arrive, but she is suddenly attacked from behind by one of the raptors.  Galloway frantically attempts to fend off the dinosaur, losing control of the chopper in the process. The helicopter crashes and explodes, leaving no possibility of escape, and leaving the crew virtually hopeless.

With nothing left, they decide to go back inside and wait out the situation by taking refuge in the control room. There, they finally learn of the dinosaur's origins from McQuade: a brilliant genetic scientist working for a poultry company goes mad and decides to wipe out all of humanity by using a virus made from prehistoric DNA to impregnate the birds with dinosaurs. She later decides to make the virus for humans. The government narrowly contained the situation, but kept some of the eggs for analysis, storing them in the plant to be hidden. Unfortunately, the eggs hatched and killed off the entire crew, therefore putting the plant in danger of a meltdown. Left with no choice, McQuade organized the mission to prevent the meltdown and save the dinosaurs for research. Using dynamite, the group decides to try and seal off the lower levels to keep anymore dinosaurs from getting in, leaving McQuade and Rawlins behind with Jesse. McQuade chases after them, knocking out Monk, but is beaten after a brief fight. McQuade finally explains that he was trying to stop them from going into the facility's lower levels, because it contains massive amounts of nuclear radiation, waste, and warheads in the lower levels, and it is a nuclear hot spot because the nuclear waste is leaking.

Jesse comes up with the idea of crashing the computers to send the site into emergency mode, which should get an evacuation squad to come and rescue them. Once Jesse is able to get the code and the plan is put into place, the group begins making its way back to the surface. They continue using dynamite to hold off any dinosaurs while getting to the elevator. While they are going up, a raptor gets on top of the elevator and manages to pull Rawlins out of it. In a particularly graphic scene, the raptor rips off Rawlins' arm and then splitting open her stomach, pulling her bowels to eat, while the others have to listen to her agonizing process to death.

Monk and McQuade get injured so they stay behind with the dynamite, blowing themselves up along with the raptors that are on their tail. Jesse and Jack, now on their own, continue making their way to the surface. They run into a large Tyrannosaurus, but manage to escape in an elevator. Jack, however, has taken a long fall and is injured. Jesse runs outside to find the evacuation team waiting. He tries to get them to go back for Jack, but they refuse, so he runs back in himself. He manages to retrieve Jack and get him outside to the rescue helicopter, just as the T-Rex busts outside and bites the head off one of the rescue crew. Jesse runs back again, getting behind the wheel of a forklift and impaling the creature, managing to push it to the bottom of the elevator shaft.

Safe, Jesse joins Jack and the remaining evacuation crew, while he uses a remote detonator to detonate the rest of the dynamite, destroying the facility as the helicopter flies off into the sunrise. 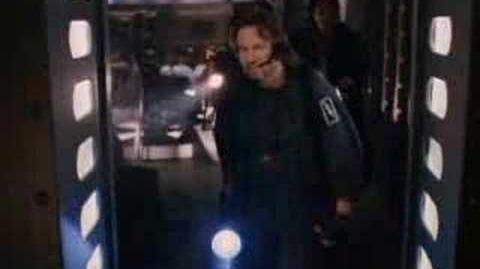 Retrieved from "https://horror.fandom.com/wiki/Carnosaur_2_(1995)?oldid=140684"
Community content is available under CC-BY-SA unless otherwise noted.