Carnosaur 3: Primal Species is a 1996 direct-to-video action/horror/sci-fi film. It is the sequel to the 1995 film Carnosaur 2, and the third installation of the Carnosaur series. It was the first of the series to not get a theatrical release.

The film is the last in the series, but was followed by two unofficial sequels, the first called Raptor in 2001, which included re-used footage from the series; the second was The Eden Formula a made-for-TV film.

International terrorists get a surprise when their cargo turns out to contain living dinosaurs. The army commando team now have to think fast, if they want to prevent the extinction of the human species, instead of the reptiles.

The film stars Scott Valentine as Col. Rance Higgins, Janet Gunn as Dr. Hodges. It was directed by Jonathan Winfrey and produced by Roger Corman. Others featured in the film includes Rick Dean as Polchek, Anthony Peck as Gen. Pete Mercer (his last film), Rodger Halston as Sanders and Terri J. Vaughn as B.T. Coolidge.

The film premiered in Germany during November 1996 but didn't premiere in America until January 1997, although the DVD had already been released.

According to the film's DVD sleeve, the film was winner of a Golden Scroll Award from The Academy of Science Fiction, Fantasy & Horror.

To date, the film remains available on DVD in both America and the UK. The film remains available as a stand-alone DVD, as well as part of the out-of-print The Carnosaur Collection box-set, released in 2001, that features all three films. In the UK, the film was the first of the series to be released in the country, with both preceding films still remaining on DVD outside of the UK.

In the UK, the film's alternative title is Primal Species.

Part of the film's ending credits read "The American Dinosaur Association monitored all dinosaur action. Scenes depicting violence to dinosaurs were simulated. No dinosaur was harmed or mistreated during the making of this film."

Sandra Brennan of Allmovie gave a rating of one and a half stars out of five, writing "The third in a series of gory films about voracious genetically engineered dinosaurs who escape and run amok, the action starts when international terrorists hijack what they think is valuable freight. Instead, the cargo turns out to be the deadly lizards, and boy they are hungry."

Popcorn Pictures gave the film half a star out of five stars, and wrote "Some of these bad films are so bad that they are amusing. Others, such as Primal Species are just downright bad. To quote Mark J. Tannacore's review, "Carnosaur started at the bottom and the series went downhill from there." It didn't just go downhill, it nosedived."

Scott Weinburg of eFilmCritic gave a one out of five star rating and described the film as "Bargain basement dinosaur droppings."

Pete Vonder Haar of Film Threat gave a one out of five star rating and summed the film up "Because 2 Carnosaurs simply weren't enough..." 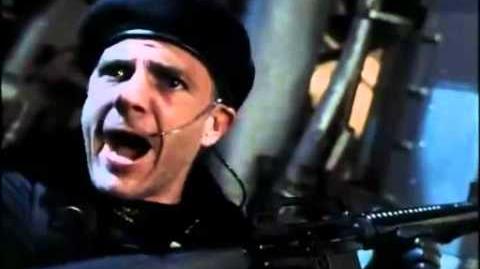 Retrieved from "https://horror.fandom.com/wiki/Carnosaur_3:_Primal_Species_(1996)?oldid=135322"
Community content is available under CC-BY-SA unless otherwise noted.